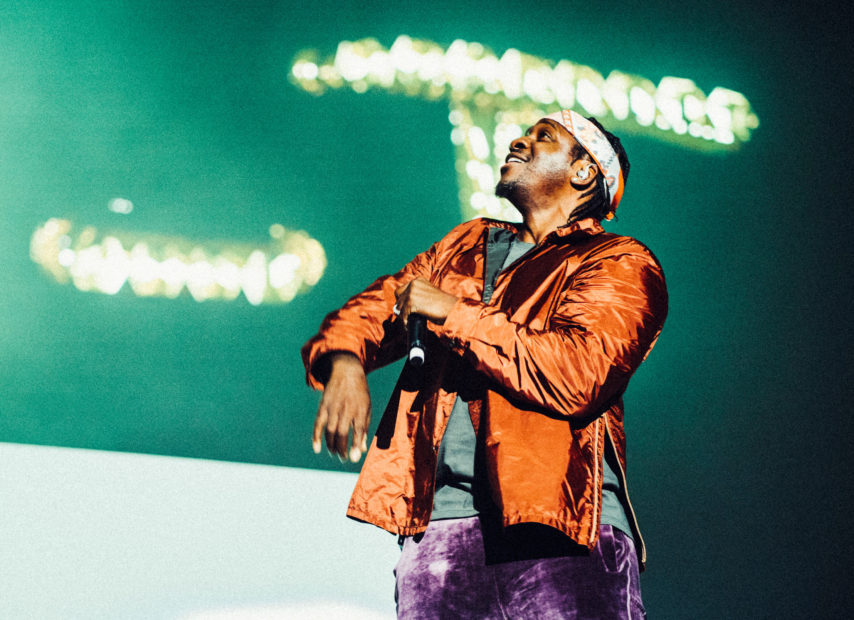 I’m standing front and center in the photo pit at Wintrust Arena, drenched in water from G.O.O.D. Music artist Desiigner’s high energy set. The energetic MC has just flung all over the front row while performing his breakout hit “Panda.”

As he exits the stage the crowd is eagerly anticipating Pusha T, Valee, Teyana Taylor and Nas. This is just night one of Red Bull Music Festival. There are still four more nights of shows in the month of November.

For more than two decades, the energy drink giants have been putting on events like this and they’re not all mainstream. This coming weekend, they’re putting on a rap battle between Denzel Curry and Flatbush Zombies in Miami, while in Nashville, DJ Premier and M.O.P. will be headlining an event called “The Boom Bap.”

In recent years, the phrase “for the culture” has been used and overused as a tagline for millennials. Lots of corporations try to show the 18-35 demographic how in tune they are with popular culture by sponsoring shows, blanketing venues with advertorial merchandise touting the virtues of their product.

But all these events weren’t only sponsored by Red Bull — they were created by them. For years, they’ve been putting money into finding unique ways to build events that celebrate and showcase the culture without profiting from it.

It’s like Many Ameri once told Fortune.com, “It’s not like there’s an event here and you slap your logo on it. It starts with an idea. We then have a local infrastructure of Red Bull people who work in the company that help create the event. It’s not about who foots the bill, but it’s about who creates these events.”

Perhaps the best example of this ideology is the Red Bull Music Academy.

A month earlier, HipHopDX actually made the trip to Berlin, Germany to see the inner workings of the Academy, which is celebrating its 20th year. On the low, this place has helped put the world on to some top tier talent that spans the spectrum of sound.

The Academy celebrated the two-decade mark with unique showcases that involved audiovisual displays, drones, performances and a 90-minute conversation with Pusha. Even with all of that, the Academy itself was the most impressive sight to behold.

From the outside, “Funkhaus” — which was the name of the building that housed the Academy — looked like a mini college campus. Walking through it felt like Willy Wonka’s Chocolate Factory, but instead of sugary treats and Oompa Loompas there were studios (digital and analog), performance spaces, and rooms upon rooms all set up to experiment with sound in ways that may have previously been unimaginable.

One room had three different sets of stairs to demonstrate the distinct sound that each one made when walked upon. There were even studios set up for Red Bull Radio to broadcast their shows. It was all there for the 61 participants from around the world that were chosen to embark upon a journey into sound.

The Academy has helped churn out some of music’s most innovative sound creators. Flying Lotus was an alumnus of the Academy, yet still the Academy remains largely anonymous in the world of popular culture and to the people that work there that’s okay. Because it’s not about the press or notoriety.

Whether it’s arena shows like in Chicago or in a space that feels like a basement — like their party in Berlin with Rico Nasty — Red Bull has found its niche in crafting and developing unique events that garner respect from fellow culture creators. Even if it doesn’t bump up the bottom line, Red Bull is putting their stamp on the culture without trying to buy their way into the mainstream.