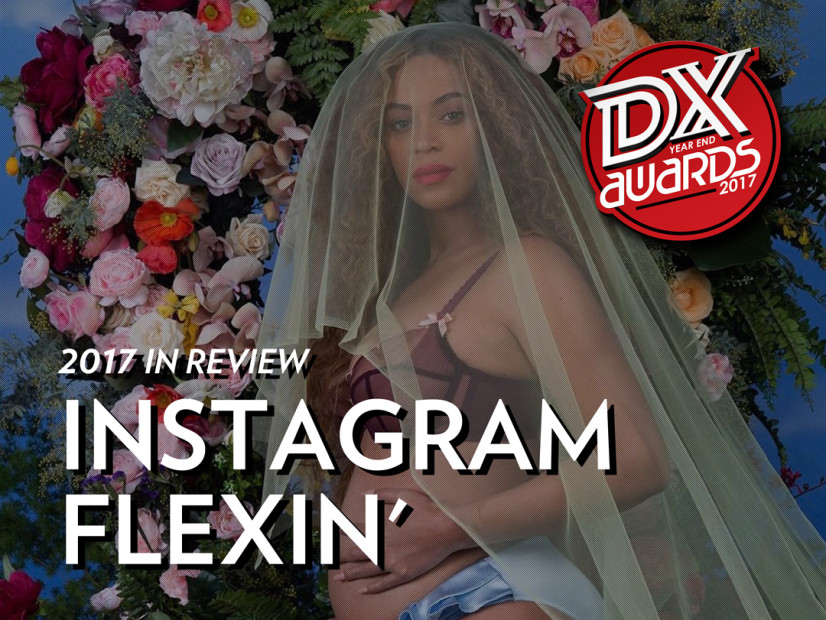 Another year in the books means another 12 months of memorable Instagram moments has been bestowed upon us. Throughout 2017, we saw “internet breaking” posts more than a few times, with Hip Hop babies being born, fake private jets being claimed, and beefs coming and going quicker than you can say “doitlooklikeimleftoffbadandboujee.”

Week after week, we here at HipHopDX bring you the most notable Instagram posts the rap world had to offer, and this final 2017 edition of Instagram Flexin’ is dedicated to bringing you the most memorable moments of the year.

We would like to share our love and happiness. We have been blessed two times over. We are incredibly grateful that our family will be growing by two, and we thank you for your well wishes. – The Carters

With 11.2 million likes in less than a year, this image became the most popular Instagram post of all time. Instagram users rushed to double tap the image when Beyonce announced that she and JAY-Z were expecting twins.

Nicki Minaj sent shockwaves across the Internet when she posed for PAPER Magazine’s second installment of the “Break The Internet” series. Following Kim Kardashian’s iconic 2014 installment, Nicki was as provocative as ever in the shoot.

The post that started it all. There were rumblings that Eminem was working on new music, but this Instagram post from Em’s longtime manager Paul Rosenberg gave us our first official glimpse into Slim Shady’s ninth studio album, Revival, with a cryptic fake pharmaceutical ad in the background.

Beyonce once again shut down the internet when she posted the first official picture of her twins, Sir and Rumi Carter.

Hey @justintimberlake JT, you’ve been a friend and an ally for a lot of years. Nothin’ but Love 4ya’!

Will Smith officially joined Instagram in late 2017 and was welcomed by fans and friends alike. After a friendly jab from Justin Timberlake teaching him what #TBT stands for, the Fresh Prince clapped back exactly the way you would expect.

“I don’t wanna hear about this ever again / Not even when she tells him that they better as friends.” Meek Mill continued to take Ls in his beef with Drake when his newly ex-girlfriend Nicki Minaj was seen posing on Instagram with the 6 god himself. Social media then did what it always does.

Travel day. NYC press run for Growing Up Hip Hop. Lets gooo. I promise to bring yall the hottest show EVER. May 25th on @wetv

Shad Moss has often been the target of Twitter roasts and memes, but a 2017 highlight came when he attempted to flex on IG with a private jet. It was soon revealed that Bow Wow was actually on a commercial flight when one of his fellow passengers uploaded a photo of the rapper/actor.

When IG deletes ur fire ass feminist post but you really don't give a fuck because everyone picked it up already #amberroseslutwalk #bringbackthebush ?

In a now infamous shot, Amber Rose posed bottomless on a staircase for the world to see. Following the NSFW photo (that was quick taken down by Instagram), the post above shows that she got the attention she wanted for her third annual Slut Walk. And if you somehow missed her initial IG post, we got you covered.

Just a couple of guys from Compton and one from Detroit. With a beard. #thedefiantones

These three superstars found the time to take one picture for the ‘Gram while promotion for The Defiant Ones was in full swing.

Only three days after losing to the Golden State Warriors in the NBA Finals, LeBron James was back in the gym getting ready for the next season. One of James’ most memorable 2017 Instagram posts featured himself dancing and singing along to Tee Grizzley’s “First Day Out.” The video not only took the already semi-popular single to the next level, it also sparked a series of LeBron imitations and “First Day Out” challenges, like this one:

Check out my students' first music video! ???a snippet is above, link in my bio! #SimsStrong #KingQuisProductions #MXCS

This is what got #ChrisBrown heated #Roommates! ? #SouljaBoy

Soulja Boy set off the beef with Chris Brown when he placed heart-eye emojis on a picture of Karrueche, Brown’s ex-girlfriend. Verbal jabs were traded between the two and it quickly escalated into a planned boxing match. Nothing ever happened (which probably didn’t surprise too many readers), but this was definitely one of the stranger beefs of 2017.

These past two years have been phenomenal for Gucci Mane. From his prison release and weight loss to the release of an autobiography and a consistent stream of musical output, Radric Davis has been living the good life. The crowning achievement came in 2017 when he and Keyshia Ka’oir tied the knot in Miami.

This is how I woke up my darling Wife @itsjessandrea on her 25th birthday!!!

Logic took time out of working on his third studio album, Everybody, to give his wife a special surprise for her 25th birthday. He recruited an orchestra to perform the Curb Your Enthusiasm theme (a show they both love) to wake her up on her special day.

One of the most talked about moments of the year came during this year’s BET Awards when Joe Budden and Migos almost came to blows on the red carpet. The topic of Takeoff being left off “Bad & Boujee” caused an awkward tension (and an endless supply of memes and parodies) between the rap group and Everyday Struggle hosts.

Clear footage of the fight between #xxxtentacion & #Migos entourage.

Joe Budden wasn’t the only rapper involved in a controversy with the Migos this year. XXXTENTACION made huge noise on social media when he revealed he’d gotten into it with members of Migos’ entourage. The first series of rants blamed Migos directly, but then further footage of the incident showed otherwise and X eventually attempted to squash the beef. For a full recap of what happened, head here.

Thank you for continuing to tune in week after week! All of you readers out there are much appreciated and we look forward to bringing you more of everything in the coming year.

Happy Holidays from the DX family. Here’s to an even better 2018.