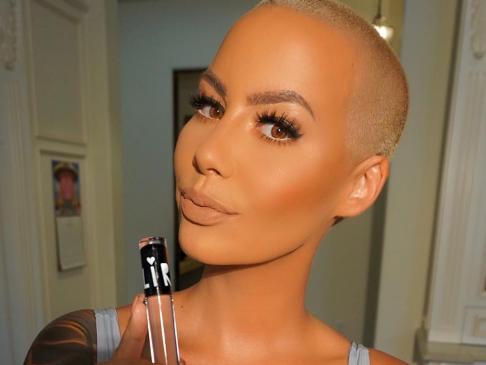 The Gram – When it’s all said and done, no one can ever accuse Amber Rose of ever having an issue getting in the news, whether it’s fake or not.

As the much of the world tuned in to watch the Cleveland Cavaliers avoid a sweep by the hands of the Golden State Warriors in the 2017 NBA Finals, Wiz Khalifa’s former wife was plotting to let the same world know that her third annual SlutWalk event was on the horizon.

And she didn’t leave any room for the imagination when it came to revealing some details. In the now infamous Instagram shot, Muva posted up on a staircase and opted to go bottomless, flashing her pubic hairs before the social media site yanked it down. Like she did her panties.

Just ask Rihanna: toeing the lines of Instagram code of conduct will open up that 100th problem but seeing that Amber got the attention she sought to get, it seems like she’s a mighty happy camper.

In the subsequent post following the deleted NSFW one, Amber wrote, “When IG deletes ur fire ass feminist post but you really don’t give a fuck because everyone picked it up already #amberroseslutwalk #bringbackthebush.”

Seeing that she had a great deal of social media awaiting her next move, the silent video response has since gotten more than two million plays.

When IG deletes ur fire ass feminist post but you really don't give a fuck because everyone picked it up already #amberroseslutwalk #bringbackthebush ?

Rose, 33, launched the Los Angeles-based SlutWalk movement in 2015 as a controversial means to raise awareness of female empowerment, discrimination, and sexual assaults.

Details for the upcoming event outside of Rose’s attention-grabbing shot have not yet been released.