Review: Logic's "Everybody" Delivers In Ambition But Not Execution 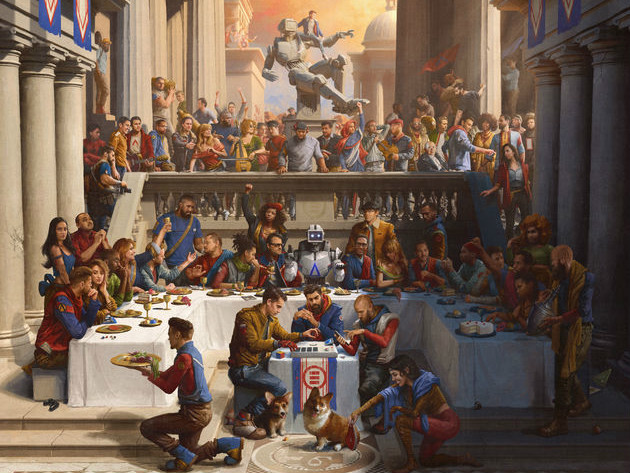 Over the years, Maryland’s very own lyrical wonder Logic has balanced three personas: The fun-loving, lighthearted party rapper who features Gumby in his music videos, an uplifting positive artist full of encouragement and wisdom and an MC whose love Golden Age Hip Hop and lightening quick raps defines his sound. Slowly the first began to fade, leaving the remaining two in stark juxtaposition.

Five years, two albums and three mixtapes into his career, Logic’s supposed penultimate studio project has arrived, giving fans a clear picture of his creative vision. Filled with fast-paced rhymes, a heavy dose of positivity and a dash of harsh reality, the plainly titled Everybody further cements Logic’s role as the older brother to thousands of fans, steering him further away from the rap gods he wishes to emulate.

Listeners are immediately mosied down to the pulpit for the hour-plus-long sermon, beginning with the uptempo, instrument-filled lyrical baptism of “Hallelujah.” Dedicated Logic fans won’t be surprised by his present day rap gospel, as this transformation has been an ongoing process. “Made in the image of God, with a blunt in my mouth and a bitch on the side/Hold up, wait a minute my life need a massage, happy ending with a money menage,” he raps, going on to tell the story of an imperfect man and the racial issues standing in the way of his dreams.

With the right hand, Logic has continued to go the way his musical big brother Kid Cudi, preaching self-confidence as highlighted by the upbeat, Jamiroquai-esque “Confess,” which is anchored by a powerful tirade from Killer Mike. When it comes to the left palm, Logic has tried to hold on to those that embraced his raw, rugged style, although Everybody offers them little more than fallacies such as an out-of-place Juicy J feature overtop the whimsical beat of “Ink Blot.”

Not only does Everybody move Logic further away from the ‘90s rappers he admires, it also makes a very clear play for radio, evidenced from the venerable anti-suicide track “1-800-273-8255” featuring Teen Choice magnets Alessia Cara and Khalid. It’s personal, but far from profound, with a straightforward, melodic message urging listeners to choose life, that makes it harder to believe Logic’s claim that he’s “real as shit” on “America. With the title track, there’s surface race and equality convo to be had over a brooding beat with a bassline seemingly geared towards disrupting a speaker’s assembly. The lyrical dexterity is still there, but the subject matter is so focused on today’s sociopolitical issues that Everybody quickly fixates on – as Logic proclaims on the aforementioned “Ink Blot” – “trying to do what’s right.”

Much like Logic’s last album, the latest opus solicits a narrative in the form of numerous skits. Whereas The Incredible True Story featured tidbits about the creation of the album – an homage to A Tribe Called Quest’s Midnight Marauders – Everybody is hosted by famed astrophysicist and B.o.B-ball buster, Neil deGrasse Tyson, who takes Logic’s friend Adam on an explorative trip through multitude of societal issues discussed on the project. It’s a noble concept that probably sizzled on paper but the 70-minute affair boasts of way too much talky talk and wastes precious moments Sir Robert Bryson could have utilized to cement his case to be considered on the new age Mt. Rapmore with Kendrick Lamar, J. Cole and Drake. Not to mention a record like “Anziety” gets lost in its ambitions to be an epiphanized teaching tool but comes off as intentionally positive album filler.

Hip Hop’s gatekeepers will say that timing and the repetitive nature of Logic’s lyrics hurts Everybody but for Logic’s younger core fan base, especially those going through struggles of their own, his latest work will be the catharsis to keep them from plunging off the deep end.