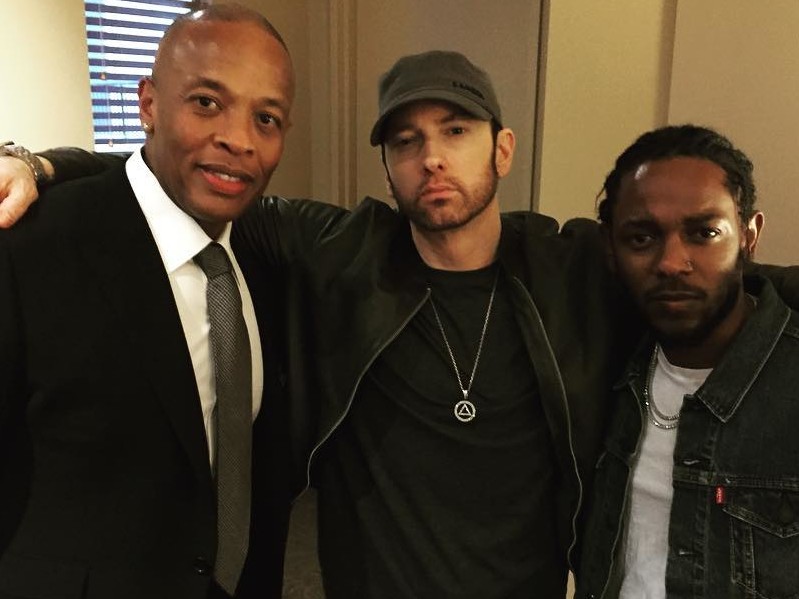 Is Eminem Afraid To Give Us A Pure Hip Hop Album?

The Marshall Mathers LP was great for a ton of obvious reasons but one aspect that rarely gets analyzed is how beautifully it spotlighted Eminem, the then 28-year-old soon-to-be “rap god,” as he wrestled with his newfound fame.

Particularly on “The Way I Am,”  which goes into great detail about how fame has disrupted Em’s right to privacy (“And I’m thankful for every fan that I get, but I can’t take a shit in the bathroom without someone standing by it”), and “Marshall Mathers,” where his self-titled psychiatrist couch session uncovers the warranted horrors that come with outgrowing your status.

Especially — ESPECIALLY from a Hip Hop point of view. The culture was founded on a sense of pride, realism and credibility that would inevitably have to backseat things once real business savvy came into play. And Eminem was feeling the brunt when he was just trying to do him.

“Now these kids diss me and act like some big sissies/ ‘Oh, he just did some shit with Missy/ So now he thinks he’s too big to do some shit with MC Get-Bizzy,'” he fumed midway through “Marshall Mathers'” free-falling vent.

“Realest Shit I Ever Wrote”: Word to 2Pac.

Although the name never became as synonymous with the underground as “Stan” did with fanatics, Eminem did pay considerable dues alongside the Get-Bizzys of the world in lieu of the obviousness that his skin color afforded him a bit of affirmative action within Hip Hop’s stratosphere. This is a guy whose first album sounds like it was exclusively recorded on an 8-track tape.

A guy who comfortably nestled alongside a slew of “real” MCs on Sway & King Tech’s heralded Wake Up Show “Anthem” and also boosted his discography with guest appearances for Rawkus Records’ Soundbombing II compilation, Funkmaster Flex, Shabaam Sahdeeq and several other underground projects. This is a guy who once admitted he was too nervous to cop a Rolex at a time when his album was fast-tracking towards diamond status and MTV’s TRL couldn’t stop talking about him.

Em even joked about the “sellout” accusations during his 2015 Genius annotating spree on the aforementioned “Marshall Mathers” line when he wrote, “MC Get-Bizzy just went platinum in Guam. His single ‘Bizzy Bounce’ has topped the charts over there. I missed out. Damn.”

But after the revelation that was the Revival tracklisting, it’s painfully obvious that Eminem doesn’t thrive off of being associated with any traditional Hip Hop sensibilities anymore.

Now, rarely does Eminem share his own album limelight with other rappers. Given the amount of raw talent currently existing on Shady Records, one would think that’s where the collaborations would stem from. While P!nk and Skylar Grey are his longtime homies, and Beyoncé and Alicia Keys are just golden voices any respectable artist should want to record with, the message is clear that Eminem wants to attract active mainstream music consumers at any cost. I’m not sure if there was a campaign for an Eminem x Ed Sheeran collaboration though. We must have missed that one on Twitter.

Allow me to add that calling Eminem a “sellout” will always be a reach. There isn’t an accolade, criticism or run of bad music that can rupture his Hip Hop credibility. He’s got the props and the plaques to prove it. If selling out constitutes being the second highest-selling male artist of all time, then every Tom, Dick and Harry should be vying for the stereotype.

But is there a sense of forgotten roots or general boredom with the perennial culture of rap? Kitschy records such as “Cinderella Man,” “Drug Ballad,” “Ass Like That” and “Cum On Everybody” have always permeated Eminem albums, not to mention the obviousness of mainstream ploys that accompany his lead singles. Yet, a consistent vibe of Hip Hop has been growing increasingly scarce, in terms of production and general rhyme schemes. Revival‘s (kickoff?) single, “Walk on Water,” has the now 45-year-old MC acknowledging the underlying consensus of his music these days (“There was a time I had the world by the balls, eating out my palm/ Every album, song I was spazzin’ the fuck out on/ And now I’m getting clowned and frowned on”).

That time he speaks of is most likely between the years of 2000-2002, which brought forth The Marshall Mathers LP, The Eminem Show and 8 Mile-everything. It was a time that also brought forth his most symmetrical Hip Hop material. While artists eventually evolve, the hibernation of Slim Shady in favor of a more gleaming pop sound is taking Eminem out of the top rap conversations. If you look at recent Grammy-nominated rap albums such as the pristine Laila’s Wisdom by Rapsody or even heavy favorite JAY-Z’s bare-bones 4:44, it’s apparent that rap simply is enough these days. Even Nicki Minaj, who’s dodged criticisms of not being Hip Hop enough while simultaneously becoming the biggest female Hip Hop artist of all time, has revealed plans to return to the essence on her next go-around.

So why is Eminem doubling down — hell, tripling down on his bets on the record sales safeguards? Is it fear, stubbornness or boredom? It’s a safe assumption that he’ll get radio play no matter how seedy — or sugary — the content is.

Only Detroit’s Finest can give us that answer.

What we do know is there’s been reluctance. The tail end of “Walk On Water” ends with a rare direct boast daring anyone to question his solidification, seeing that he is the creator of “Stan” (easily one of the greatest rap songs to ever hit a CD). But Eminem has known to be reluctant about giving himself credit, even where and when it’s due. An earlier line in “Walk on Water” where he spits, “I’m not God-sent, Nas, Rakim, ‘Pac, B.I.G., James Todd Smith/ And I’m not Prince, so…” attests to that (as does a previous DXBreakdown, which you can watch below).

I don’t necessarily like “Walk On Water” but I do appreciate the headspace Marshall Mathers has found himself in. The saying “once an addict, always an addict” doesn’t yield to any sort of financial status or physical strength, so for him to divulge in music that delivers a sense of catharsis — especially if it’s keeping him alive — then so be it.

It’s just disappointing it can’t be beats, rhymes and life that bring everybody onto the rap side.