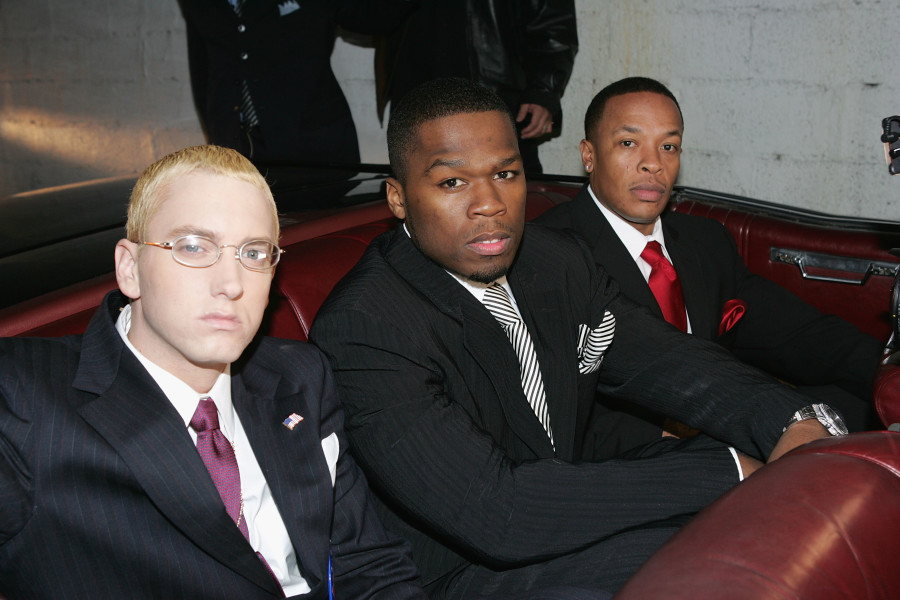 Let’s face it: every great rapper has an Achilles’ heel.

Nas is known for picking lackluster beats. Some feel that 2Pac’s and JAY-Z’s delivery can be too choppy. And where the hell is that Andre 3000 solo album?

When it comes to Eminem, well, let’s just say his lead singles are often campier than Yellowstone National Park.

“Walk On Water,” Eminem’s Beyonce-assisted lead single for the upcoming Revival, has been judged by the fans and Stans alike and it’s now time to rank Eminem’s lead-off cuts now that another one is set in stone.

Contrary to what some might believe, “My Name Is” was not the first single off Eminem’s major label debut. (It’s just the first one you heard.) Marshall left Eminem at home and Slim Shady came out to play over disturbing screams and downbeat Bass Brothers production. A brain-dead-like-Jim-Brady Shady takes the stage like Rage Against the Machine, screaming “Fuck the world!” like 2Pac, knocking out the opposition like Mike Tyson, and cursing out players like former Detroit Lions coach Marty Schottenheimer.

That last reference dates Eminem, as does his reference to Ron Goldman’s killing in 1994. And while his clever lambasting of white rap acts Everlast, Vanilla Ice, Prime Minister Pete and MC Serch is understandable, given that they made it harder for a white rapper to be taken seriously, kids today probably won’t have any idea who they are.

All that said, this song is still eye-popping, guiltily hilarious, and technically impressive. “The looniest, zaniest, spontaneous, sporadic/ Impulsive thinker, compulsive drinker, addict,” he rhymes. After hearing this song, who could doubt those claims?

During the iconic Up in Smoke Tour, Em would quip how much he hated this song. Seeing that rap has now overtaken pop music for the ubiquity crown, it would be crazy to rank this in the top three most TRL songs of all-time — making it a shoo-in for embarrassment. But when you strip away the Becky-bait beat and seriously dated name drops (let’s see Jimmy Kimmel find kids on the street who know Tom Green or Fred Durst), there’s a magical element about this song that cannot be overlooked.

It was the coming out party (no, not that type of coming out party) for an artist who would go on using the First Amendment as his moleskin and boldly trailblaze the genre into uncharted commercial success. Also, it’s still hilarious to hear him say “fuck” Will Smith.

Campiness X Factor: The “my bum is on your lips” line far outliving the original reference.

Come 2002, Eminem had already released two comedic statement singles with “My Name Is,” and “The Real Slim Shady,” and a much darker one in “The Way I Am.” So, “Without Me” remains remarkable not so much for what he says, but more for his technical ability and the hum-worthy synths that strain to keep up with his rhyming pace. There are more digs at white music acts like Limp Bizkit, Chris Kirkpatrick of NSYNC, and Moby. He calls Prince a symbol and draws self-comparisons to Elvis Presley. And of course, he tells his mother to fuck herself, bemoans the FCC’s bug up their ass, and pokes fun at then-Vice President Dick Cheney’s heart problem. Some different names, but the same sentiment. Been there, heard that.

However, “Without Me” is undeniably catchy. Listen to the song once and it will be stuck in your head throughout your workday. “A little bit of weed mixed with some hard liquor/ Some vodka that’ll jump-start my heart quicker/ Than a shock when I get shocked at the hospital/ By the doctor when I’m not cooperating/ When I’m rocking the table while he’s operating,” he breathlessly raps in a high-pitched voice. There was no denying at this point that the sheer spectacle of Eminem rapping was worth the price of admission.

Campiness X Factor: Nobody listens to techno but this is a Dr. Dre disco beat.

“Lose Yourself” from 8 Mile: Music From and Inspired By the Motion Picture (2002)

Simply hearing this track could turns a listener’s knees weak and arms heavy (but please don’t vomit your mom’s spaghetti). The lead single from the soundtrack to Em’s hit movie is not only his greatest single ever, it’s also arguably his best song of any kind. “Lose Yourself” condensed the film’s bleak angst turned extraordinary triumph, complete with three acts (verses) to cement itself as auditory cinema. Cheesy references? Forget about it. There’s a lone reference to 8 Mile co-star Mekhi Phifer, and only to contrast Em’s pre-Hip Hop struggles with a Hollywood lifestyle.

The third verse’s climax finds the beat quickening as Marshall speeds up his flow in frantic desperation for a Rocky-esque photo finish. With “Lose Yourself,” Eminem proved once and for all he didn’t need shock rap to be great. He can do anything he puts his mind to. Which also means making history. “Lose Yourself” was the first rap song to win the Academy Award for Best Original Song.

Although it wouldn’t be revealed until the 2010 Recovery song, “Talkin’ 2 Myself,” the line “Encore I was on drugs/ Relapse I was flushin’ them out” all but excuses the atrocity that was, “Just Lose It.”

By this point in his career, Eminem had proven himself to be not only an automatic sales magnet but a formidable MC capable of squaring up with anyone in the lyrical arena (he had taken on Canibus, Ja Rule, and XXL magazine before this song’s release).

So for him to revert back to dressing up like Michael Jackson (and Madonna?!?) after he murdered the part of B-Rabbit was utterly disappointing. Especially since garbagé like this buried the best (and more Dr. Dre) records on the album.

Another stinker of a lead single. His Underdog accent is painfully obnoxious, and he sounds sorely out of place rapping about “bitches hopping in [his] Tahoe.” That’s just not Em. Nothing about this track sounded genuine, save his kinship with Dr. Dre and 50 Cent, whose verses are bland and waste the flavorful, bass-heavy Dre production. At least the pop-culture references weren’t stifling (Shady saved that for “We Made You”). The extent of it for Marshall is to liken himself to Andre the Giant and call for the Bat-Signal to shine for himself, Dre and Fiddy.

Meanwhile, Dre spends a good chunk of his time bragging about his luxury vehicles and making a tired reference about Waco, Texas. 50 Cent also gets materialistic, boasting about Jimmy Choo Shoes and Birkin Bags after comparing himself to King Kong. It’s all very pointless. Next, please.

“Not Afraid” from Recovery

Hello, Sober Eminem. After totally “flushing” the drugs out, Marshall Mathers would step up to pick up the bulletproof vest once worn by “Lose Yourself” to armor up against depression, addiction, and fear with one of his most recognizable singles in “Not Afraid.”

Seven years later and the track still oozes with maximum levels of conviction, confidence, and passion. “It was my decision to get clean/ I did it for me, admittedly I probably did it subliminally — for you/ So I could come back a brand-new me/ You helped see me through/ And don’t even realize what you did, believe me you” he rapped to touch the hearts of millions.

Sure, the song’s structured chorus has always been vulnerable for parodies but there’s no denying that its message, powerful rhyme schemes, and unabashed testimonies have all assisted in saving at least one person’s life. No campiness here.

Eminem and Royce Da 5’9 became friends again in the late 2000s, and naturally, they hopped in the studio together as Bad Meets Evil for a nine-song EP. The lead single is technically outstanding, but it wasn’t anything we hadn’t heard before. And while “Without Me” benefitted from the fact that it was still breathtaking to hear just how well Eminem can rap, by this point we all knew what Marshall was capable of (or, we thought we did, until “Rap God” caused earthquakes all over the Western Hemisphere).

Still, it was enjoyable to hear Royce and Marshall trade bars like they were sitting on a porch. It helps that the pop culture references weren’t as invasive. They’re still there — Eminem compares his competition to The Brady Bunch, takes his 1,236th dig at Vanilla Ice, and cleverly talks about living life until he’s Swayze (Patrick Swayze had just died a few years prior of pancreatic cancer, and Shady’s quip sounded more like wordplay than a diss). Meanwhile, Royce likens himself to Jack Kevorkian and Michael Jackson.

Cringe-worthy moments do arise when Eminem bends “penis” to rhyme with “anus” and directs the hard-on in Nicki Minaj’s direction. Eminem was nearly 40 years old at this point, and his juvenile raps weren’t so funny anymore. “Fast Lane” is impressive, and even worthy of multiple spins, but pales in comparison to past lead singles.

Wait, Eminem was in Beastie Boys? At least, that’s the impression that was intended for “Berzerk,” his official kickoff for the under-appreciated MMLP2. With assistance from the Licensed to Ill architect, Mr. Rick Rubin himself, the static distorted rap record differentiated itself from anything that was poppin’ at the time (which likely had Mustard on the beat, hoe).

From a purist’s standpoint, there’s nothing really to knock “Berzerk” for. The crashing guitar damn sure worked for the Beasties and Run-DMC during the dawn of Hip Hop’s acceptance period and live DJ scratches are fractions of a b-boy eargasm. That said, bringing back ’80s Hip Hop isn’t the same as resurrecting its fashion and the song didn’t overly connect in the grand scheme of things. Still, a noble effort at “keeping it real.”

Finally, a lead single almost entirely devoid of gimmicks. Marshall Mathers takes center stage here, rapping conversationally like JAY-Z did on 4:44. An album after elevating himself to “Rap God” status, Marshall strips off the facade and bears the weary soul of the man underneath. Yes, he references his past work, but in a way that criticizes his crutches (his juvenile rhymes, shouting, and past vitriol toward his mother). Instead of claiming Top 5, he puts himself a notch below Nas, Rakim, 2Pac, The Notorious B.I.G. and LL Cool J.

Beyonce threatens to steal the show with her elongated, high-pitched expressions of self-deprecation on the hook, and the slow, melancholy piano keys set an appropriate tone for Eminem’s reflections. The only substantial criticism to this track is that Eminem is still not fully married to the beat, opting instead to go rappity-rap even when he’s waxing thoughtfully. Still, this does little to hinder the overall feel of “Walk on Water,” which raises hope for a compelling revitalization.

Campiness X Factor: Where are the drums?