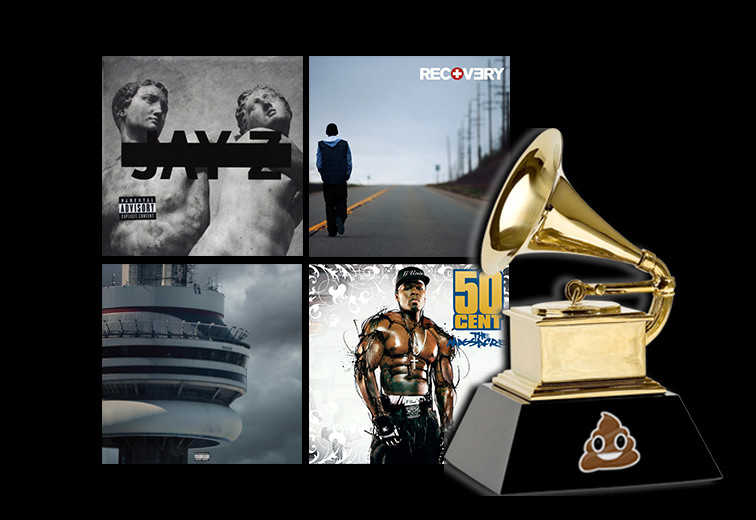 We’re not going to waste your time with a long intro since you already know what you’re getting from the headline: the worst rap albums to ever get nominated in the Best Rap Album category throughout its 21-year history at the Grammy Awards. Get your arguing hat on and let’s get into it.

Years reflect the year the album was nominated.

Even as pioneering rappers and leaders of the no-nonsense movement, Naughty By Nature have never been considered album rappers. Classic records like “OPP” and “Hip Hop Hooray” stand alone in their own right, but 1996’s Poverty’s Paradise features neither of those songs. When you factor in that it was the first Grammy for Best Rap Album and it beat out Bone Thugs’ E. 1999 Eternal, 2Pac’s Me Against the World and ODB’s Return to the 36 Chambers: The Dirty Version … actually, I lost my train of thought. Those are some mind-boggling facts.

In 1998, DMX kicked down the door in Timberland boots at such at a rabid pace, the Grammys didn’t get around to nominating either of his first two history-making, chart-topping albums. By the time …And Then There Was X came around, the Dark Man had built up a name for himself, but where he avoided the sophomore slump, he missed out on the three-peat, at least in terms of quality. For every “Party Up,” there was a “Good Girls, Bad Guys.” Regardless, it’s still X’s highest-selling album to date with five platinum plaques to its name.

While both Weezy and Birdman continue to trade subliminals (and not-so-subliminals) over Carter V blame, the Carter IV keeps racking up irrelevance points. The first-week sales of nearly a milli still raise eyebrows to this day and Wayne definitely sounded uninspired for most of the project.

Say what you will about Iggy Iggz but she had the glow for 15 minutes. She took the tornado caused by “Fancy” and used it to take the world by storm. Now, as for the album that monster hit appeared on, describing it as “weak” would be putting things nicely. Its inclusion in the Grammy noms was a slap in the face to the likes of Freddie Gibbs and Madlib’s Piñata, YG’s My Krazy Life and Run The Jewels 2, among several others.

Don’t listen to the critics. Stat Quo says it was wack — and he worked on it. End of discussion.

Like DMX, Common hadn’t achieved mainstream notoriety during the run of his first two critically acclaimed albums so the nomination for UMC felt more like an olive branch than anything else. Although it wasn’t exactly Electric Circus discombobulated, this project still ranks on the lower rung of Comm’s catalog, as it was dominated by several attempts for commercial success. The title track still goes, though.

There are two types of Eminem fans in this world: Team Relapse, Recovery Is Annoying and Team Fuck The Accents On Relapse, Recovery Was Better Bitch. Argue among yourselves all you want but living in a world with an Eminem album that doesn’t have Dr. Dre production is not a Hip Hop planet I want to be a part of. And nor should you.

Em and Lil Wayne actually sampled A Night at the Roxbury for “No Love.” When have you seen a car pull up bumping “Cinderella Man?” (Answer: never!). We love the honest moment of clarity (“Encore I was on drugs, Relapse I was flushing ’em out”) but this album wasn’t the lick.

History will show that The Massacre’s biggest infraction was following up the mega classic Get Rich or Die Tryin’. It packed a few good songs within its bulky tracklist (“Ski Mask Way,” the value-sized diss track “Piggy Bank,” etc.) but given his newfound business savvy, Fiddy was more concerned with cornering marketing spaces than actually creating lasting product.

Back in 2004, 50 Cent infamously crashed the Grammys stage after Evanescence inexplicably won the Best New Artist trophy over him. Although the Committee messed that one up, nominating The Massacre wasn’t exactly the make-good any of us needed.

When Jay Z calls his Black Album-to-Kingdom Come transition the “worst retirement in history,” you have call a spade for it was. Jigga’s comeback was far from total wackness (it has 400% more Dr. Dre beats than Eminem’s Recovery and the Budweiser campaign is still something for all rappers to envy) but it was far from the witty genius rap heads were accustomed to. And it also didn’t deserve a Grammy nom.

Forget sales. Read the review. Check out the aftermath.

You probably didn’t even know there was a Skee-Lo I Wish album, did you? It’s not an uncommon practice for an artist to name their album after a popular single in hopes to entice the public into picking up the entire project. The daydreaming shorty did just that but he’s commonly known as one of the most renowned one-hit wonders the culture has ever seen. Don’t take it as a diss to his career, however. He’s still a very active tourer and collects checks from the foundation he laid.

It’s not lost on anyone that this sing-songy sales magnet is a favorite metaphor among rap heads for all things cheesy and pop. That said, R.O.O.T.S. is easily Flo Rida’s worst project. Song titles like “Gotta Get It (Dancer),” “Sugar” and “Be on You” are cringeworthy enough without the actual music. [Editor’s Note: I really like “Sugar” but that’s beside the point here.] If anything, “Right Round” obtained legend status for closing out The Hangover in glorious fashion. But, that’s what the Best Rap Performance category is for.

“They call me Big Elly…” You’ll definitely find a ton of conflicting opinions when it comes to LL and Timbaland’s unforgettable “Headsprung” duet, but take that away from The DEFinition and what are you left with? Anybody? Name me one other song. Anybody out there? Didn’t think so. The self-proclaimed G.O.A.T. DEFinitely doesn’t get the credit he deserves for having a solid album discog (Mr. Smith, 10, Bigger and Deffer just to name a few) but The DEFinition is easily one of his worst.

At this point, it’s obvious Jay Z’s name is Grammy nom gold, no matter the season, weather or talking head in the White House. (Blueprint 3 nearly made this list too.) It’s not an uncommon opinion to hear Magna Carta Holy Grail being hailed as Hov’s worst album but it does have the distinction for setting off the streaming game, thanks to his partnership with Samsung at the time. #NewRules.

Ok, so the Tim McGraw-collaboration “Over and Over” jumped the shark and became a smash hit, but what about the rest of the album? Released in 2004 at the same time as his adjacent album Sweat, Suit was created to showcase the sophisticated bachelor in contrast to the other project, which was the platform for the guy who created the greatest Hip Hop music video of all-time with nothing more than a pool party and a credit card (print that!). Instead of greatness, we found our country grammarian rapping about women’s feet and the finer side of materialism. He eventually released Sweatsuit, which was the best of both albums and an overall better idea.

MC Mystikal’s last album before his career was derailed from a rape charge and subsequent prison sentence (actually his last album — period) was far from the sendoff his legacy deserved. It kicked off with a phenomenal record: the Neptunes-produced “Bouncin’ Back (Bumpin’ Me Against the Wall)” and crashed off a cliff immediately after. Now that the Cash Money shackles have been removed, the redemption time is now.

*This actually won. What thee fuck?