I Believe In Kid Cudi Because I Once Attempted Suicide 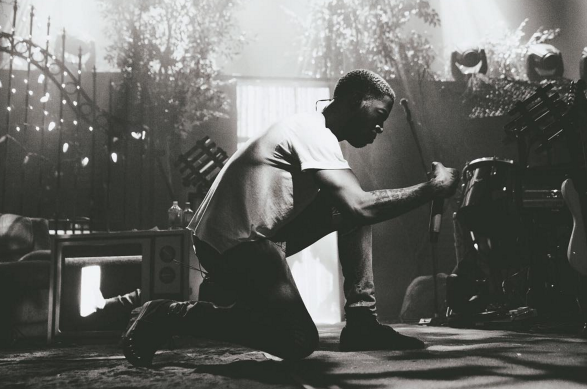 I was once a teenager overwhelmed by my circumstances. At school, I was brutally bullied, more out of place than George Michael at a Brotha Lynch Hung show. But my main motivating factors were, at the time, issues beyond my control. I was, and am, afflicted with severe obsessive-compulsive disorder (OCD), generalized anxiety disorder, and recurrent depression.

I lived in a suburb of Erie, Pennsylvania. I had a family who cared for me but was still figuring out how to relate to someone with severe mental illness. It was no one’s fault; they faced a difficult learning curve, and I struggled to effectively communicate my problems to them. I felt all alone, and Hip Hop became my refuge. Kanye West’s Late Registration fed my soul and T.I.’s King made me feel like royalty when my peers treated me like a peasant.

But it wasn’t enough.

So the summer after freshman year I downed three bottles of pills, including my OCD medication. It didn’t take, and vomit, liquid charcoal, more vomit — and a hospital stay later, I ended up physically in stable condition.

The perception of me from my peers, however, was another matter. I told a few people close to me about my attempt and the word got out. By the time school had started again, it seemed like half of my classmates in my grade knew. Some people were nice to me, but a lot of people treated me like a pariah. A leper. I was an outcast who loved Outkast. Frustrated, I talked to one of my few friends, Nick, about the struggle to make friends in the wake of everything.

“It’s your reputation,” he confided in me. “People want to be friends with you but they don’t because of what it would look like.”

One of the saddest things about mental illness is how misunderstood it is. People assume depression is a sign of weakness, or that suicide is a pathetic cop out.

On Monday of this week, Scott Mescudi posted to his Facebook account a soul-baring declaration of his current mental state.

“It took me a while to get to this place of commitment, but it is something I have to do for myself, my family, my best friend/daughter and all of you, my fans,” he wrote. “Yesterday I checked myself into rehab for depression and suicidal urges. I am not at peace.

“I haven’t been since you’ve known me. If I didn’t come here, I would’ve done something to myself.”

This statement is as responsible as it is courageous. Like Cudi, I’ve checked myself into a facility because of suicidal urges, mine brought on by unbearable OCD symptoms (for those of you who only know of OCD from shows like Monk, it’s not some cutesy disorder about cleanliness. It’s a relentless and vicious disease.) Being able to admit you have a problem serious enough to check yourself into a hospital is not admitting defeat. One common knock I hear from people about suicide is that it’s selfish. By checking himself in, Cudi acted on behalf of his loved ones in his own time of turmoil, which is extraordinarily selfless.

And a time of turmoil it is. Cudi goes on to say he doesn’t know what peace feels like, or how to relax. “My anxiety and depression have ruled my life for as long as I can remember and I never leave the house because of it,” he writes.

He speaks of being unable to make friends because of his mental health issues. Isolation, loneliness, and lack of socialization all are common byproducts of Cudi’s affliction. It’s clear that he is living a life of misery. Suddenly, those random tweets attacking Kanye West and Drake make sense. Kanye’s back-tracking from an angry response to calling Cudi his “brother,” also makes sense. Yeezy clearly knew something we didn’t.

Trapped In My Mind: WebMD lists warning signs of suicide as sudden changes in mood (especially from sad to happy), parting with precious belongs and clinical depression. The National Suicide Prevention Lifeline is available 24/7 at 1-800-273-8255 for anyone diagnosed with those symptons.

Cudi speaks of being ashamed, and he apologizes approximately four times in his post. That is a common response. However, he has nothing to be ashamed of. If he was checking himself into a hospital for a physical ailment, would anyone even blink at it? No. Depression and anxiety are mental illnesses, with the emphasis on illnesses. To even separate between the mental and the physical is, in a way, ridiculous because the brain is a physical component of our bodies.

It’s not a choice Cudi is making to feel this way, nor are these issues brought on by some lack of strength. No, it’s quite the contrary. For a celebrity like Cudi to admit this publicly takes an untold amount of bravery. The #YouGoodMan trend on Twitter, aimed at allowing black men to break the stigma of mental illness and speak freely about it, followed Cudi’s confessional. It is proof that society is starting to talk about these issues more openly and honestly. Yet, as shown by Donald Trump’s recent comments indicating that PTSD can be avoided by some kind of mental fortitude, there are still far too many people in society that don’t understand and don’t want to understand mental illness, nor those afflicted by it.

I was able to push through my mental illness, all the fear and doubt that held me back for years, to finish high school with my head held high. I returned to playing football my senior year — I had quit after middle school because of my anxiety — and through perseverance was able to make friends and weave myself into the school’s social fabric. None of that happened without first recognizing my issues and working through them.

While people found out about my attempt against my will, Cudi willfully declared his suicidal urges. In the end, we both came to grips with the fact that we struggle with mental illness. I still battle with mental illness every day of my life, but I’m still here, and I’m still doing what I love. OCD, anxiety and depression are demoralizing, and there are times when I still think of suicide. Instead of giving in, I have friends to call and my family is very supportive, also. I’ve still got a friend in Hip Hop.

I know God put me here for a purpose, and that my mental illness does not define me.

I believe the same thing for Kid Cudi. He has a long journey ahead of him, but there’s already hope to be found. He wrote that if all goes well he’ll be out in time for Complexcon, “lookin forward to seeing you all there for high fives and hugs.”

Yes, you do, Kid Cudi. Keep fighting, brother. As will I.