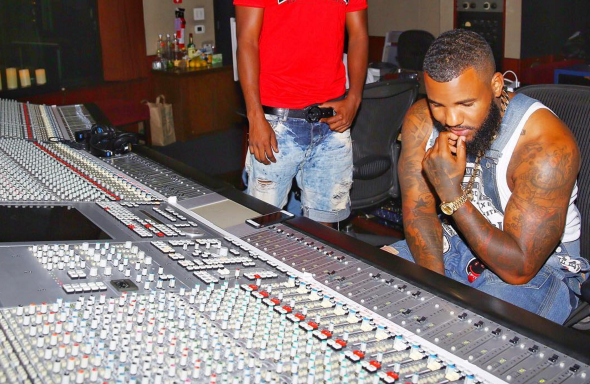 HipHopDX was in the building Monday, September 19 when The Game premiered his upcoming 1992 album at Lavo Nightclub in New York City. The private event featured members of the media and music industry including several notable DJs including DJ Envy. After a couple of hours of finger food and open bar, the festivities got underway as snippets of all 13-tracks from the album were played.

Since the listening, his very visible friction with Meek Mill and his Dreamchasers camp, Sean Kingston (and more of the less, Beanie Sigel) has taken center stage but come October 14, the Los Angeles rap star will be screaming 1992 above everything else.

Here are some examples, including but not limited to those samples, of why Chuck Taylor wanted this album to rank high within his discography.

The Game is often overlooked in the annals of Hip Hop greatness but it can be tough to deny his contributions when evaluating his discography. Since debuting with what many view as his magnum opus, The Documentary, he has been a mark of consistency. In an industry that often sees artists who start off with a classic album have trouble reaching that mark again, Sir Taylor has seen favorable opinion on all of his seven previous releases. This is made even more impressive with a relatively dense output of 11 albums in seven years. It seems that he has reached a happy medium between the lackluster releases often seen by rappers who put out work biannually or more while avoiding being left out of the conversation like artists who release biennially. While Game has never dropped an Illmatic or Reasonable Doubt, he has also never released a Nastradamus or Magna Carta…Holy Grail. Listeners can be confident that he will not lay an egg with 1992, the question will be how strong the project can be. “What Your Life Like” appears on the album as a quintessential Game track.

Prior to this release, The Game was mostly affiliated with West Coast style and subject matter in his music. Over the last 12 months, he has become very vocal about the issues between minority communities and the police as well as showing support for the messages of the Black Lives Matter movement. His foray into current political issues hit an apex with his organization of a peaceful protest along with fellow Californian Snoop Dogg earlier this year. (With whom he paid homage to by grabbing Joe Cool, the artist who created the Doggystyle artwork.) These themes are obviously on his mind and from the first listen it seems they have bled into the music opening the door for a whole host of new subject matter rarely if ever explored in his music. This newfound thematic depth is found on “Savage,” with the hook of, “The way we living is savage,” as well as “Lifestyle,” “True Colors,” and the double entendre of orange juice and Orenthal James on “Fuck OJ.”

What’s Beef? There may be differing opinions on the answer to that question depending on who you ask. One thing is certain, having an aggressive and belligerent agenda has produced some of the best bars in history. From the pinnacle of this phenomenon in the 90s with Tupac and Biggie, “No Vaseline” and the Queens-Bronx battle, to one of the hottest songs last year in “Back to Back,” hopes can be lifted when bad blood is involved.

Based on the initial listen, The Game is following suit with many of rappers currently putting out the best product by going outside the box sonically. This is seen most distinctly on the track “Bompton” which combines a piano and heavy bass for a haunting soundscape waiting for some strong lyricism. This year’s best albums have pushed the envelope making those who stay in their comfort zone forgettable. From the gospel inspiration on Coloring Book to the inventive instrumentation on The Life of Pablo these days artists often think outside the box to make memorable releases.

The album rollout and debut party stayed on theme with 1992 hoping to connect with a sociological and musical time when Pac and B.I.G. were alive and well and a man from Arkansas named Clinton was headed into the White House. Going all in on that idea, tracks like “Grew Up On Wu-Tang” and “How Do You Want It?” sample some of the great music from those days borrowing from “C.R.E.A.M.” and Soul II Soul’s iconic “Back II Life.”

The State Of The Industry

Among the less scientific thoughts is simply that it is a good year for the artform. From the aforementioned Kanye and Chance releases to the underwhelming — but marketable — Views, it has been a nice run for the culture in a year where based on the news cycle it may be needed more than ever. With a top-notch catalog and all that inspiration around it would be smart to bet on The Game only strengthening this year’s roster.