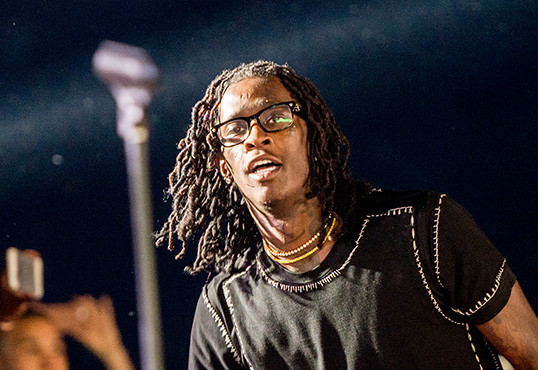 This past weekend it was announced that Young Thug would be changing his name to “No, My Name Is Jeffery.”

Sooooo Thug changed his name to "No, My Name is Jeffery" pic.twitter.com/KBSelSPr9W

I refuse to call Young Thug, "No My Name Is Jeffery". I'll call him Jeffery. I have no problem with that. I'm not saying all that other shit

Absolutely no way is Thugger changing his name to 'No My Name Is Jeffery'. That's aaaaaaawful

The new name (if it holds) is definitely unorthodox, but what about the Atlanta rapper/womanswear model isn’t? This is just another step for an artist who is already fluid when it comes to sexuality and gender, so it makes sense for his name to be in flux too.

The five-word moniker might seem excessive, but Thugger isn’t even the first to go by a name that doubles as a full sentence. Just look at Mike WiLL Made-It or Soulja Boy Tell ‘Em. (Or A Pimp Named Slickback, but that’s another story.)

But the name change is just part of a long-enduring trend of rappers wanting to evolve as artists. Dropping the “young” or the “lil” from a name is a rite of passage into Hip Hop maturity.

Young Thug turns 25 on August 16 — the same day his Jeffery album is expected to drop — and he could be looking to re-brand himself with something more befitting of a quarter-centenarian.

So far though, he has yet to address or publicly confirm the change on social media or otherwise. His manager, 300 Entertainment exec Lyor Cohen, is the one who announced the change to “No, My Name Is Jeffery” (possibly inspired by an interaction on a whiteboard that also spurred rumors of an August 26 album release).

Even if the new name doesn’t catch on, lots of established rappers have managed to grow old while keeping the “young” title. Young Buck is 35, Young Dro is 37, Jeezy is 38 (but shed the first part of his name a few years ago) and “Bust a Move” rapper Young MC is the oldest of the lot, soon to hit 50.

Much like the “Young” title, “Lil” can also be a tough moniker to shake.

Lil Jon, Lil Wayne and Lil Kim have owned their smaller statures with the name, and won’t ever outgrow it. Shad Moss has done his best to retire the tag, going from Lil Bow Wow to Bow Wow to just his given name. But to anyone born before around 1990, he’ll always be known as Lil Bow Wow (or possibly just Calvin Cambridge).

“I changed my name because I’m getting older now and it’s too many Lil’s,” a 15-year-old Shad Moss told MTV in 2002. “All these Lil’ rappers, I’m just kind of getting real irritated by it. I said, ‘You know what? Drop the Lil’. Forget it. I’m Bow Wow.’ Besides, I’m growing up, I’m not little anymore. [I just decided] two weeks ago. I really got irritable. It’s all these Lil’ cats, forget it. I’m Bow Wow now. Everything is just ‘Bow Wow,’ no ‘Lil’ Bow Wow.'”

Lil Boosie effectively rebranded himself as Boosie Badazz, though I guarantee at least one person reading thought Lil Boosie was still in prison and that Boosie Badazz was someone totally different.

Many other rappers have switched names over the years too.

Tity Boi was able to successfully transition to 2 Chainz (because, he explained, it’s more “family friendly”), most likely to the relief of everyone who has to call him by name.

Puff Daddy has more aliases than a credit card scammer with multiple personality disorder, and even when I started writing this sentence I didn’t know whether to refer to him as Puff Daddy, P. Diddy, Diddy, Sean “Puffy” Combs or some combination of all of that.

Yasiin Bey used to be Mos Def, and though he’s had the new name for years, still gets references to his old one in headlines from many outlets to this day.

It’s important that we allow rappers to grow and change and experiment both as artists and as people, but at the same time, they need to have the forethought to choose a name that has some lasting power, especially at a time when having a consistent brand across different social platforms and media outlets is so important.

So if you’re starting out as a new rapper with dreams of hitting the big time, please pick something unique, something memorable, and for God’s sake, something easily searched on Google.

And remember that though you may be young now, you won’t be forever.