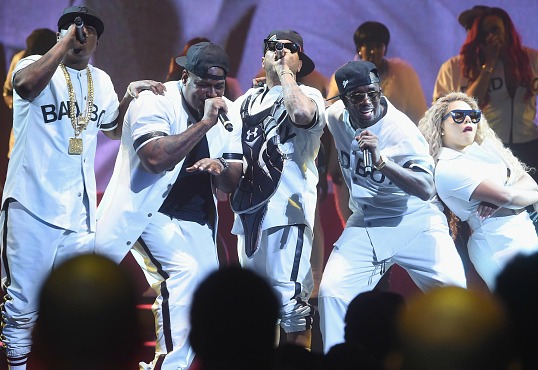 4 Hip Hop Reunions That Could Potentially Happen This Year

Diddy set NYC on fire this past weekend by kicking off the 20th Anniversary Bad Boy Reunion Tour in Brooklyn; the place where the label’s legacy all started. During the two-night spectacle at Barclays Center, Diddy ran through a decade of hit records alongside the original Bad Boy family. As if bringing together Lil Kim, Ma$e, 112, The Lox and Faith Evans wasn’t enough, they managed to bring out some very special guests ranging from Jay Z to Desiigner.

Undoubtedly this will go down as one of the most monumental live shows in Hip Hop history and luckily it wasn’t “one weekend only” as the Bad Boy Family hit the road at the end of this summer for 25 more shows. All of this really attests to Diddy’s ability to spearhead and execute a tour that music lovers in general have been begging for. Naturally, this raises the question: “what other Hip Hop reunion tours have we been begging for that have real potential of happening?”

We could sit around all day and fantasize about the biggest and best ‘90s labels reuniting and touching road but those are primarily pipe dreams. The odds of dynasties like Roc-A-Fella and the Ruff Ryders reunifying are slim to none but there are a handful of other collectives that might want to dust the off the mics and give the people what they want. Here are four reunion tours that actual have potential of happening in the foreseeable future.

CASH MONEY RECORDS (With or Without Birdman)

Most people probably think this reunion tour will never happen in a million years based on the current Birdman vs. Lil Wayne debacle. Last summer’s LilWeezyana Fest sparked the idea of a Hot Boys reunion but for this tour to be the ultimate Cash Money records reintegration, all parts of the label would have to come together. This means not only the Hot Boys linking back up but the Big Tymers and Young Money would also have to be in attendance. CMR has been around since 1991 and has evolved dynamically over the years so everyone from Mystikal to Nicki Minaj would have to be present in the tour as they all lent a hand in building the label. This is easier dreamed than seen happen but there is hope.

B.G. is currently behind bars for gun possession and witness tampering but is forecasted to be released shortly. Turk might be a wild card but he did in fact drop his 2015 lawsuit against the label and still goes by @HotBoyTurk32 on Twitter so if anyone is still holding onto the Hot Boy dream, it’s him. Juvenile and Mannie Fresh recently teamed up with Lil Wayne for the song “Hate” which actually featured a corny, yet optimistic outro by Birdman himself which is all good news for those wanting to rock camouflage bandanas and watch a modern day performance of “Bling Bling” and “We on Fire.”

Individual past members like Curren$y and Mystikal don’t appear to have any outstanding beefs with the label that gave them a boost and would surely hop on stage for a verse or two. Furthermore, getting some of the original Young Money members together would be an easy sell. Drake and Nicki’s loyalty for Wayne runs very deep and the likes of Gudda Gudda, Jae Millz, Lil Twist would be happy just to be mentioned in the Ticketmaster description. Tyga on the other hand, seems to have burned his final bridge with the label.

The untapped energy of the No Limit Boyz will undoubtedly rub off on all the veteran Soldiers of the Tank should they embark on a reunion tour. Master P along with his son Maserati Rome, have been fairly active over the last year campaigning for their No Limit Forever Records team who seem to have a promising few years ahead. Along with Master P himself, signed rappers like Krazy and Silkk The Shocker are trying to remain active and have projects that are set to be rolled out in 2016.

What is most exciting however is the potential prison release of original No Limit member Mac. In a recent interview with HipHopDX, Mac felt confident that the circulating clemency petition will spring him out earlier than expected. As a true founding member of the label, it would be only right for Master P to rally the old and the new No Limit-ers for a reunion tour in honour of Mac’s release.

Even gathering a handful of The Real Untouchables, minus C-Murder and Big Ed of course, would be a big deal for rap fans that have been listening to the Tru 2 Da Game double disc for over 19 years. Add a couple shows with Mystikal and Snoop Dogg and you’ve instantly got a live show that would be flashier than some of their old album covers.

Crunchy Black may slipped up and let the cat out the back in a recent interview with HipHopDX but the early news is better than no news. Since Juicy J experienced a career resurgence after signing with Wiz Khalifa’s Taylor Gang in 2012, the future of the Memphis rap legends was in jeopardy. To quote Captain Obvious, the deaths of longtime affiliates Lord Infamous and Koopsta Knicca didn’t help matters none. Nevertheless, the originators of crunk music as we come to know it have plenty of active members and ammunition to unleash onto a patient fanbase.

Terror Squad’s reunion hasn’t officially happened yet but the success of Fat Joe and Remy Ma’s “All the Way Up” (now complete with a Jay Z guest spot) proves they still have the juice. The duo have been building themselves an impressive 2016 with said single and don’t show any signs of slowing down. With Remy back home (hopefully for good) and both her and Joe in an amicable place, a reunion tour is no out of the question.

The beauty with this reunion tour is that it could work two fold. It could work simply as a celebration tour for Remy and Joe where they can cascade through their hits, new and old, while bringing out Tony Sunshine for a track or two and of course getting DJ Khaled on the ones and twos. Cuban Link has yet to resolve his beef with Joe and would probably rather never rap again than to do live ad-libs for “All the Way Up.” At the end of the day though, Joe, Remy and Khaled are really all you need.

Another option is a commemorative Big Pun tour. The Punisher is coming up on his would-be 45 birthday and a tour highlighting all his greatest accomplishments throughout his eight-year career would be one hell of a birthday gift. The whole hologram charade might not be the angle fans are looking for but if a tour in his honor were to be done tastefully then it could one of the greatest tours in Hip Hop history. Not to mention hearing “Lean Back” through stadium speakers should be on everyone’s bucket list.