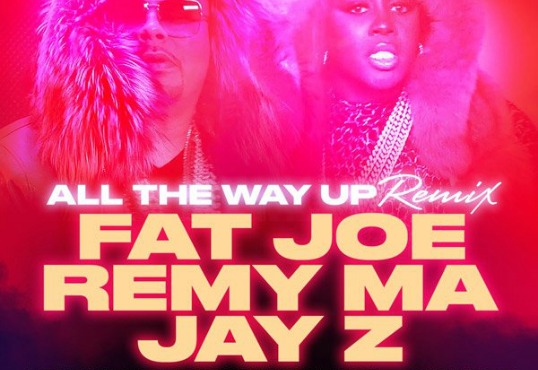 Let’s be honest, “All The Way Up” is the biggest surprise hit of 2016. Yes, we all know Brooklynite who has broads in Atlanta has controlled the singles conversation this year. However, a track featuring two New York veterans getting as much attention as Fat Joe and Remy Ma in this current Hip Hop climate is pretty much unheard of even with contributions from both French Montana and Infared. Is it the extremely catchy hook, Cool & Dre production or the bars alone? Who cares? It knocks. Looks like Jay Z understands that as well in his first guest appearance in a while. And no, those two “Pop Style” bars don’t count. Does Hov add anything to “All the Way Up?” Allow HipHopDX Managing Editor Trent Clark and Senior Features Writer Ural Garrett to give their opinion on the remix.

Does Adding Jay Z Boost “All The Way Up” Higher?

Trent: I was highly amused reading the comments on the site and our Facebook page. The opinions were on the absolute value spectrum for both ends of the scale. It was either Jay was washed like the laundry aisle and needed to vicariously live through Beyonce or “King Hov” was showing the new rappers how to do this. Son.

Damn, can there never be a grounded reaction anymore? I’ll agree with the rapmudgeons that Jay’s flow was more Ex-Lax than sturdy; he’d rather come off across on the track as cocky than to allow anyone to have ammunition to say he’s rusty. But you have to give props where it’s due: traditional punchlines and double entendres are on the verge of becoming an endangered species in rap and Jay has some witty flavor here. “We never gonna let the elevator take him down” in reference to Prince’s death? C’mon man. Who out is wrapping their head around the beat with lyrics like that?

The biggest L for the record is the fact that Jay Z’s presence will forever overshadow Remy Ma’s phenomenal bars. Hopefully she saved some heat for Platas o Plomo. (That was a rhetorical statement; of course she did.)

It goes without saying that the “All the Way Up (Remix)” is a much-needed victory for what constitutes as a New York Hip Hop sound but this track is a national smash hit. Pay homage to The Don.

Ural: New York is probably having the best year in recent memory. Clearly, the biggest and most controversial single of the year so far is “Panda.” The Desiigner joint features everything the post-internet generation loves about all Hip Hop inspired by Atlanta. The roll-out for “All the Way Up” and its success is almost the exact opposite. Cool & Dre’s production has a contemporary bounce to its horn sample that screams a very specific lyrical attack which is why Fat Joe and Remy Ma make so much sense. Adding French Montana and Infared into the mix makes sense considering the younger rap listeners. With that said, “All the Way Up” is New York’s biggest bridging-the-generational-gap moment since damn near forever. The more traditional radio push approach really sealed the deal in it’s success. For the first time in a while, New York Hip Hop is really having a spectacular year. Having Jay Z on the remix more than hone in the point. On the surface level, the novelty works.

Jigga does exactly what many expect from him on the “All the Way Up (Remix)”. The checklist approach will either excite or turn-off depending on where one stands. We get references to his wife and Lemonade, Prince dying with his masters only available to be streamed on Tidal and even the infamous “Elevator” incident years back. Oh, he’s still pushing D’usse and drinking the fine cognac out of his 21 Grammy Awards. Joey and Remy’s new verses feel a lot more lyrical aggressive this time around, yet less catchy than the original. That’s fine as the original verses would have sounded weird with Hov’s more updated content. It’ll be interesting to see where Hov takes this for the rest of the year considering he’s rumored to be dropping a project by the end of the year. Meanwhile, there isn’t exactly a clear release date for the collaborative Crack and Remy project Platas o Plomo nor follow-up single. Who cares? A banger having one of the catchiest hooks this year received a remix featuring one of the most prolific emcees turned mega mogul to come from the city that never sleeps.