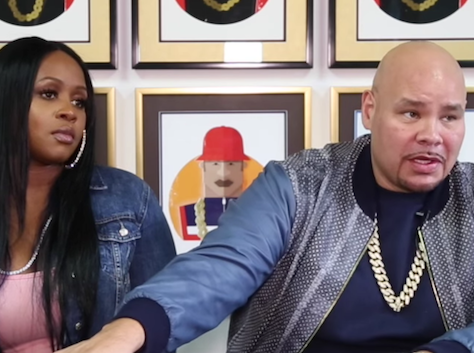 Los Angeles, CA – Troy Ave and Joey Bada$$’s conflict hit overdrive this week. Ave released visuals to “Bada$$,” his supremely disrespectful track mocking the Cinematic emcee and fallen Pro Era member, Capital Steez. In response, Joey Bada$$ visited Sway In The Morning and dropped 10 minutes of viciousness targeting the Major Without A Deal-rapper. Sides aside, both artists represent two of New York’s most respected young guns. For a region accused of lacking the unity seen during the south’s 00s dominance, the 10s appears to be carrying on the same, arguably crippling tradition.

During a recent visit to #DXHQ, Fat Joe shared his thoughts on Troy Ave and Joey Bada$$’ conflict. “Terrible,” the Terror Squad captain said, describing how he feels seeing the two upstarts toss bars back-and-forth. Joe was notably in a public beef with 50 Cent in 2005 and now says conflict never benefited his career.

“Fat Joe, personally reached out to Joey Bada$$ who’s a good friend of mine, and Troy Ave and tried to broker the peace,” Joe tells HipHopDX exclusively. “That shit ain’t it, first of all. That’s me being an elder statesmen from New York, I tried to get the two young brothers together. It didn’t work, but I tried.

“I don’t really think there’s no real progressive place for battle rapping and dissin’ a nigga and everybody warrin’,” he continues. “All you’re doing is fucking up your money. Trust me, I went to war with everybody. I had the biggest battles on the globe—silently and publicly. It got me nothing. It got me nothing. So all I can tell a young brother like Troy Ave or Joey Bada$$ is exactly that. Look, the rap battle got me nothing. It doesn’t get you nothing. In fact, one of you might lose real bad to where your dream came true and left true. That’s a fact. Somebody can get musically destroyed.”

Fat Joe and Remy Ma recently released the video for their single, “All The Way Up.” Expect the two to release a new album this summer. HipHopDX will release the full interview on Monday, April 4.