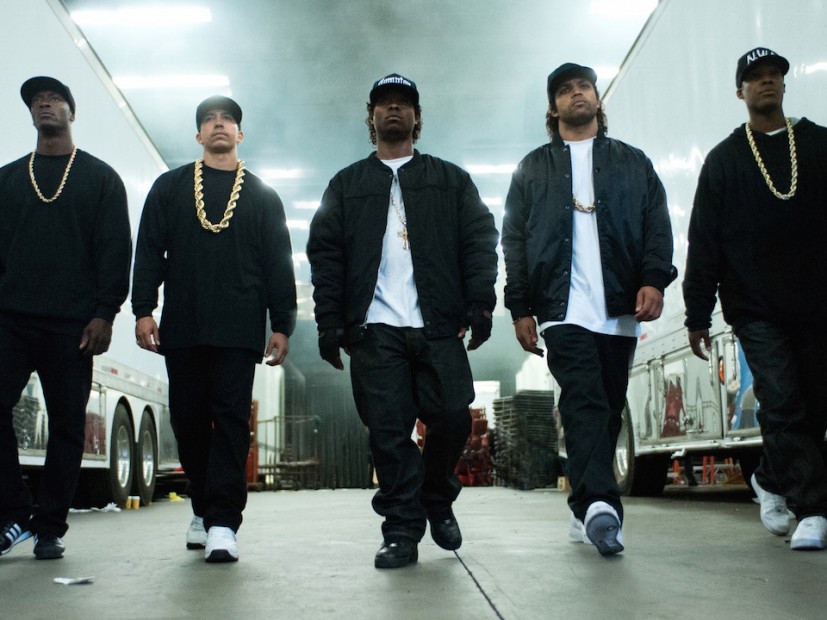 “Just one, random slave for the Academy members to recognize us as a real, black movie,” joked Ice Cube during an interview promoting the home video release of N.W.A. biopic Straight Outta Compton with Angie Martinez on Power 105.1 FM. Since the mid-January announcement of the 2016 Academy Awards nominations, accusations of racially inspired neglect for films featuring primarily African American cast and staff have led to everything from ceremony boycott to the comical #Oscarsowhite hashtag on social media. Two films were at the center of the debate through Creed and Straight Outta Compton. In an age of national protest, #BlackLivesMatter and everything else in-between, there wasn’t a film released in 2015 that became more relatable to black struggles than the F.Gary Gray directed motion picture about Hip Hop’s most influential West Coast group. Many were surprised when the only Oscar nomination the film received was Best Original Screenplay. Ironically, script writers  Jonathan Herman, Andrea Berloff, S. Leigh Savidge, and Alan Wenkus were all white. The overwhelming response to Straight Outta Compton’s Oscar snub wasn’t shocking considering the promotional roll-out and later success of the movie.

Released August 14, 2015, the Universal Pictures film starring O’Shea Jackson, Jr., Corey Hawkins, Jason Mitchell and Paul Giamatti became a rarity in black cinema. Beyond Straight Outta Compton becoming enough of a financial success to break a few records including becoming the highest grossing music biopic and film directed by a black director of all time, the film received positive critical reception as well. Having a $6.2 million dollar opening weekend led to ending 2015 as the 18th largest box-office grossing movie at $161 million. Regarding the Best Picture nominations, that’s more than every nominee excluding Matt Damon vehicle The Martian which landed at number eight. Currently, the Legendary Pictures, New Line Cinema and Cube Vision productions rest at 88 percent top critics score on Rotten Tomatoes and 72 percent on Metacritic. Focusing more on the film-centric Rotten Tomatoes, Straight Outta Compton positions itself at number 70 for the best-reviewed movie of 2015.  Oscar favorite The Revenant starring Leonardo Decaprio is housed slots lower with 83 in comparison.

As many anticipate Chris Rock’s monolog during his Oscar hosting duties this weekend, one question remains. Was the snub a matter of taste or racial motivation? According to African-American Film Critics Association founder and president Gil Robertson, the answer could be both. “Before the nominations were announced, Straight Outta Compton received recognition from everywhere including the Screen Actors Guild, Producers Guild of America and National Board of Review,” says Robertson. The AAFCA itself lent awards to the film for Best Picture and Best Ensemble alongside Jason Mitchell winning Best Supporting Actor for his role as Eazy E. Incidentally, the organization dedicated to supporting African-American films honored the 25th Anniversary of Boyz N The Hood and New Jack City during its annual awards ceremony early February in Hollywood. Of course, both films honored have been cherished by the Hip Hop community since their release decades ago.

Palate wise, Hip Hop has mainly had luck in areas more specifically related to the music itself through the Best Original Song category. Eminem set the wheels in motion around 2002 with “Lose Yourself.” Juicy J, DJ Paul and Frayser Boy all won the same award three years later for Hustle & Flow track “It’s Hard Out Here For A Pimp.” Last year, despite Ava Duvernay’s Selma causing controversy after its alleged snub, John Legend and Common received the award as well. This means that The Oscars have recognized the various complexities of Hip Hop through the lyrically anthemic (Eminem), ratchet (Three 6 Mafia) and inspirational (Common). When it comes to the totality of the works themselves in other more prominent categories like Best Picture or Best Director, there may be a disconnect that Robertson mentioned. This is more noticeable in the much-reported lack of diversity in the voting sector of The Academy.

Unfortunately, Straight Outta Compton couldn’t compete against the critical favorites of 2015 like Mad Max: Fury Road, Brooklyn, Room and The Martian. Putting things in perspective, Mad Max: Fury Road is the highest reviewed film of 2015 on Rotten Tomatoes with a staggering 97 percent. Besides Mitchell, none of the cast found themselves looked upon for individual acting nods from many end-of-year lists or special awards. That includes the most seasoned and revered actor of the ensemble cast, Paul Giamatti, who didn’t receive much notice for his role as Jerry Heller. For Straight Outta Compton’s competition in the Best Original Screenplay category, its biggest threat is Bridge of Spies and Pixar’s Inside Out which has already garnered numerous Best Animated Feature awards. The Steven Spielberg directed Bridge of Spies is up for the night’s Best Picture which doesn’t help much either.

Straight Outta Compton will go down in cinematic history as the film that opened the door for more stories told from a Hip Hop perspective. Thankfully, it didn’t become the critical catastrophe, yet successful box office earner that was Notorious. Instead, the film about the groundbreaking gangsta rap group made up of Eazy-E, Dr. Dre, Ice Cube, DJ Yella and MC Ren is the blueprint for quality rap biopics. Doesn’t matter much if The Motion Picture Academy doesn’t recognize that. That’s fine. There was a moment when Driving Miss Daisy received better Oscar recognition than Spike Lee’s Do The Right Thing over twenty years ago. Hip Hop will surely become grateful for a lifetime for everything Straight Outta Compton represents.