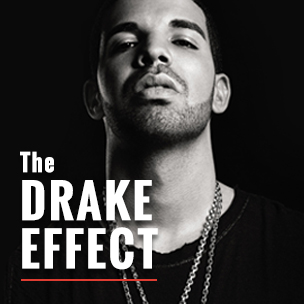 The Drake Effect: 10 Times A Drake Co-Sign Introduced Budding Stars To The Mainstream

Drizzy Drake is back at it. Yesterday the official version of Drake hopping on Fetty Wap’s “My Way” dropped and the song is now a bonafide hit. Before Drake saddled up to that thing, the song was the kind of sing-songy b-side we could have done without. But now, with a Drake feature attached to it, people will be singing it at obscene levels in the club and, like it or not, you will be forced to acquiesce to its moodiness.

This isn’t the first time, though; Drake has walked into the life of a bubbling local act and taken their sound to superstardom. Sometimes he simply absorbs them into the OVO collective (which is like the borg but kind of cool and they’re good to their moms), and other times they let them roam free into the wilds of superstardom, always ready to call in that favor.

Call him Mr. thank-me-later, because a Drake co-sign can change your life. And unlike Jigga or Ye´ it seems like he also takes seriously the idea of artist management. From The Weeknd to iLoveMakonnen, PARTYNEXTDOOR and Majid Jordan, Drake doesn’t just take a keen interest in an artist, he seems to shroud them in the aura of his sound and brand.

Here, we go over ten tracks that helped move artists into a mainstream light that they found elusive to slide into before the Drake effect took hold.

The Will-A-Fool produced “Tony Montana” dropped to much local fanfare, but it wasn’t until the Toronto emcee/crooner hopped on the record that the thing reached the velocity that took Future into the mainstream. Drake’s introduction to the record was fairly organic, as well, despite the back and forth kind-of-sort-of beefs these two have had over the years since. Future told Karmaloop TV at the time, “He just felt the movement from my 1000 mixtape on out. He was like, ‘Man, I’m listening to all your mixtapes. Right now, I’m listening to your Dirty Sprite mixtape. Man, I love how you switch your flows up on every song, you might be rapping and then you might start singing in your hook. You’ve got melody…how do you come up with your patterns? The patterns you choose is so different’…but that’s what I do. Every song I switch up for a reason: to show the diversity.” Combined with “Magic,” Future’s Pluto firmly planted the artist on everyone’s radar, but we’re pretty sure his trajectory would have been less pronounced without that Drake feature.

Migos’ was already huge in ATL before Drake caught wind of their regional hit “Versace.” Apparently, Migos ran into Drake at Birthday Bash when 2 Chainz brought him out. Never one to miss an opportunity, Drizzy started naming songs off No Label and the crew was impressed. After he threw the line they sent him “Versace” and the rest is history. The man knows where to look, as well. Is there any question that Atlanta is the 10,000-pound gorilla of Hip Hop right now considering the fact that Drake continues to reach his OVO hands in that cookie jar? See a pattern?

“Trap Queen” was a local buzz worthy hit last year before Fetty Wap’s alignment with 300 Entertainment allowed more mainstream recognition. The New Jersey native eventually gained his first number one on the Billboard Top 100 chart. Could it be Zoo Wap’s interesting aesthetic or the infectious hook? Doesn’t matter, the masses flocked to an ode to a woman not afraid to get her hands dirty. Then again, in today’s music climate, that doesn’t necessarily equal longevity. For the second go, Fetty Wap dropped “My Way” featuring Remy Boyz member Monty some months ago. As that track began to gain traction, Drizzy hinted earlier in the day of his addition before releasing a CDQ version later. The result is another successful feature in a long line of out-of-nowhere guest appearances with artists not exactly well known to the mainstream yet. Fetty began his career as a successful curiosity. Drake’s appearance on the “My Way” remix gives him clout as someone with possible longevity.

“Tuesday” has become synonymous with turning the traditionally turned down second day of the workweek into an opportunity to turn-up. And, in traditional Drake fashion, that Atlanta cookie-jar looked too good to keep his hand out of. iLoveMakonnen wasn’t necessarily bubbling before Drake turned him into a household name but he was grinding. And that’s the thing about Drake, he only chooses artists that already fit neatly into his aesthetic. So neatly in fact, that the transition from independent artist to OVO signee always seems seamless.

The potential for Meek Mill doubled when he made his way over to Rick Ross’ MMG imprint. However, the Philly native was really only known for that loud raw flow full of grit. Having Drake’s melodic touch on “Amen” added mainstream friendly seasoning that propelled it to greater heights. That Midas touch also made Meek Mill a lot more digestible to the masses. Since then, that connect has led him to Drake’s YMCMB sister Nicki Minaj after a short stint in jail. Now, the stars have officially aligned. At the center of that glory was OVO’s fearless leader.

One of the biggest surprises of last year had to be YG. From “Toot It And Boot It” to My Krazy Life, the massive leap in both sound and lyrical acumen were gargantuan. But even more of a surprise was his Drake feature on the quasi-crossover “Who Do You Love.” The rap game’s hottest producer, DJ Mustard, produced the breakout hit, and the ability of YG to relate his gangster-rap proclivities to Drake’s audience was tantamount to My Krazy Life being one of the breakout hits of the year. This one would have done really well without this song at all, but like a Dre´ mix, a Drake feature right now can send you into the stratosphere.

House Of Balloons was an emo-masterpiece, no doubt, and it felt inevitable that if the young crooner weren’t signed to OVO then he would be very, very soon. Then Thursday came along, and lo and behold we found Drake attached to “The Zone.” The dark, spiraling echo was perfect for a Drake feature. And despite The Weeknd not being officially wed to OVO, quips like “that OVO and that XO” show there’s more than a causal relationship between the two camps. While The Trilogy was released in a combination of his own imprint XO and Republic, The Weeknd has benefited greatly from his very close relationship with the OVO owl over the years.

After Overly Dedicated, Kendrick Lamar was viewed as Hip Hop’s potential West Coast savior. Drake must have been noticing as well when he added him to Take Care interlude “Buried Alive.” By then, K. Dot already released Section 80 several months back and captured the hearts of core Hip Hop fans. In fact, many saw that album as superior to Take Care despite the obvious difference in sales. Drizzy allowed Lamar to spill his heart out without interference, only adding to the album’s themes. Before the post- “Control” rivalry, the Compton emcee’s grand mainstream introduction came by way of the 6 God himself.

Unless one was into Sampha’s collaborative efforts with London R&B singer/songwriter Jessie Ware or electronica luminary SBTRK, his reach out here in the states couldn’t have been much to shake at. In a past life, Drizzy may have been an A&R because adding “Too Much” to Nothing Was The Same was pretty clever. Sampha releasing a Drake-less version some time later seems even more interesting. It was a display of what makes OVO such a figure in Hip Hop. He has the ability to elevate himself further by wisely aligning himself with artists on the cusp of success. It’s as his career in music has him doubling as an acute tastemaker.

Formulating his OVO label, Drake’s first artist given a proper roll-out on the Warner Brothers imprint was non other than PARTY or later more known as PARTYNEXTDOOR. Nearly within hours of announcing the signing, “Make A Mill” made the blog rounds with Drizzy’s blog as the source. It wasn’t until Drizzy’s assistance on PARTYNEXTDOOR EP first single “Over Here” that many began to notice. For someone to provide background backing to for an artist is one thing, lending a creative co-sing via guest verse makes all the difference.