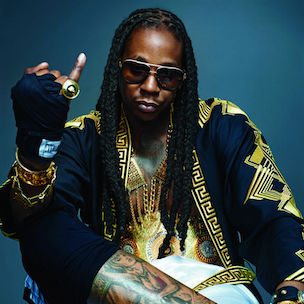 When news broke earlier Tuesday morning that HLN news pundit Nancy Grace would debate G.O.O.D. Music’s own 2Chainz over marijuana legalization, there was one legendary standoff that came to the minds of many Hip Hop aficionados.

Despite how entertaining hearing now classic phrases like “You Mad” became over time, the important and excessively tiresome conversation on rap lyrics’ effect on young impressionable minds went relatively nowhere. Everyone from Bill O’Reilly to Salome Thomas-El, Cam’ron and Dame Dash all seemed to be brainlessly running in circles without truly understanding each other’s context.

However, the discourse between Grace and Titty 2 Necklaces felt positively different. There was an air of civility even past slightly disrespectful barbs mainly coming from Grace’s mouth. Interestingly enough, nothing elevated toward a shouting match similar to this incident between Talib Kweli and Don Lemon last year.

Though Grace sounded worse than Dr. Alfred Carroll in Reefer Madness, 2 Chainz did something positive for Hip-Hop while effectively pushing toward responsible legalization of recreational marijuana usage. While many MCs of various levels celebrate the mighty fine herb, most fail to inform the fans on a systemic level. Hopefully this could lead toward more becoming more proactive. In the mean time, here are HipHopDX’s  five reasons the man who only wanted a big booty hoe for his birthday outsmarted the former prosecutor and television host.

2 Chainz Did Not Get Into A Shouting Match

For someone who once threatened to “close the docket on that ma’fucka prosecutor,” Titty Boi’s ability to remain calm in the face of Grace’s nonsensical arguments regarding weed usage  was surprising. Even when the HLN host rudely interrupted Tauheed Epps, he kept his cool the entire time. Then again, there’s the possibility he smoked some of the finest beforehand; always the best way to deal with idiots of this caliber. It’s even more astonishing considering how G.O.O.D. Music head Kanye West has had a hard time conducting interviews without raising his voice at times. Maybe the father of North West could learn a few pointers for Mr. Tru.

2 Chainz Left The Insults At Home

There isn’t a better medium for grade A insults than Hip Hop. Hell, the artistic battle of wits can reach levels of hyper competitiveness on both literal and figurative levels. 2 Chainz is known for having his share of scathing lines including this fan favorite:

“Bitch sit down, you got a bad atti’/gave her the wrong number and a bad addy/ you ain’t going nowhere like a bad navi/ Ass so big, I told her, ‘Look back at it!”

Outside of a few interruptions and alluding that participating in rap automatically means a lack of intelligence by mentioning the Atlanta rapper’s “higher than mine” college GPA, nothing escalated to cheap shots thankfully.

Yes, 2 Chainz is right, prosecuting minor weed offenses is indeed a waste of taxpayer money. According to popular marijuana legalization lobby group Norml, 60 thousand individuals are behind bars for marijuana offenses costing taxpayers $1.2 billion per year. In addition, $7.5 billion and $10 billion are spent arresting and prosecuting individuals for marijuana related violations; 90 percent of those arrests are only for possession.

The former one-half of Playaz Circle mentioned tax revenue from pot legalization benefiting local education and fixing potholes. There’s some truth to that. Since legalizing marijuana in 2012, a recent CBS affiliate in Seattle discovered the city stands to boost Washington state’s tax revenue by $25 million by July and an estimated $200 million by mid-2017. However, where that money goes specifically is a little murky. In the case of Washington, .20 cents of every marijuana purchase sales tax goes to general funds for the state according to the video below.

The look on Grace’s face when 2 Chainz said that one of the kids caught on video being forced to smoke would eventually end up smoking weed later in life considering the type of inadequate parents was priceless. Only that type of unfiltered brilliance could give listeners this parental advice in naming one’s child.

For some reason, Grace relied on footage of awful parents making bad decisions to justify her stance. Obviously, she hasn’t spent a good thirty minutes searching through YouTube. How exactly she concluded legalization would lead to legion of parents blowing joints with kids while enjoying a family session of Grand Theft Auto is beyond comprehension. Like 2 Chainz mentioned, in those instances, there are issues taking place in the home that goes far beyond parents finding it acceptable to film one’s child high on illegal drugs. The point? Criminalization as well as legalization won’t eradicate irresponsibility.

August 2013 saw 2 Chainz take part in one of the most bizarre arrests for possession seen in some time for someone of his status. After his tour bus was pulled over for a “broken taillight,” the officer discovered the smell of marijuana. Utilizing their constitutional rights, they refused a search. Their tourbus was then towed to a nearby police training facility where he and several others were arrested and charged with possession. All over what Titty Boi claims was less than a gram of weed contrary to other reports. This is where one could lean toward personal responsibility, but when you read ridiculous cases like these, Mr. Tru starts to make a whole lot of sense.