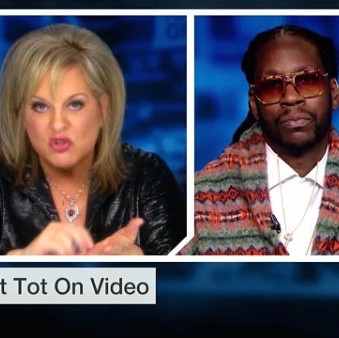 Atlanta, Georgia emcee, 2 Chainz debated marijuana legalization on Nancy Grace tonight (January 13) on HLN. During a snippet released, the talk show host used the case of Melvin Blevins as an example of why marijuana is a dangerous drug. The case involves a 19-year old man who videotaped himself forcing his 18-month old niece to smoke weed. A pawn shop clerk found the tape inside of a camera that Blevins pawned.

“I got something for you, Nancy,” 2 Chainz said in response. “I’m from the urban community. I’m from the inner city and pawn shops are associated with a drug known as crack. Most of the time when people pawn things it’s not to buy a sack of marijuana. It’s to feed a high that’s much more strenuous than a drug such as weed. I feel like that person had a problem that’s probably deeper than weed. Maybe they was high on crack when they were doing that footage right there.”

“It’s the same thing we talked about earlier, darling, with the legalization of alcohol,” he said. “You’ll find some footage like this but everyone is not doing this. Some people actually love their child. Some people know that that’s obviously wrong. So there’s nothing to really argue about. These people are imbeciles. You can’t use this case to define a whole community.”

The New York Daily News reported in 2009, that Michael Blevins was sentenced to 10 years in prison after pleading guilty to several weapons and drug charges in Columbus, Ohio. He was also accused of being a part of marijuana-trafficking ring. A WBNS-10tv report says drug enforcement agents found 2,000 pounds of marijuana during a raid on Blevins’ home.

2 Chainz is expected to release his next mixtape, Tru Jack City on January 27.