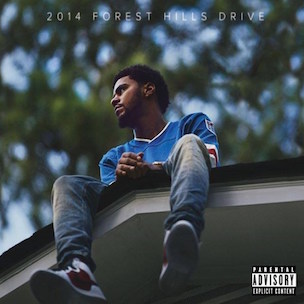 As such, I’m reserving this space for a weekly reaction to Hip Hop’s current events. Or whatever else I deem worthy. And the “I” in question is myself, Andre Grant. I serve as HipHopDX’s Features Staff. Aside from tackling stray topics, I may invite artists and other personalities in Hip Hop to join the conversation. Without further delay, here’s this week’s “Stray Shots.”

We Want J. Cole To Find Himself

Who is J.Cole? Is he the guy that showed up to Ferguson? One of the only emcees to make his way down there, and the only one from the new crop of young heir-apparents to actively take an interest in politics? The potential has always been there, dark and secretive like a plot, but he seemed hesitant to embrace his destiny. Maybe those “Young Simba” comparisons had something more than a shallow Disney metaphor circling them, or maybe he truly is embracing the mythology that exists around him as this sort of bridge between the old generation and the new. The lyrical dexterity has always been there, and some of his most amazing beats he’s given to other artists. But with all those tools, J. Cole is still hiding in the shadows of a few greats. Of course, there’s his boss, Jigga-man, for one, and the opposite side of the coin of Golden era New York Rap, Nasir Jones for another.

Whatever the case, Cole must be prepared to tell us exactly what he wants to be with this upcoming album. His last two projects were deeply divided ones, with critics generally in favor but searching for more, and fans either providing unwavering support or discrediting his flow as boring. So what’s it gonna be, Cole? Is young Simba all grown up and ready to take the throne? And you know the other thing that could almost guarantee a Cole winter? Letting someone else behind the boards.

We Need J. Cole To Use Different Producers

Like his ‘09 brethren’ Big K.R.I.T. did this year to great effect on his breakout LP Cadillacitica, J. Cole must allow other people behind the boards if he’s going to truly expand his sound. Right now, we know he’s enamored with the heavy samples of his youth and the souled out hymnals of his trans-Atlantic southern roots, but it may be time to let other people have a turn at his vision. Freeing up your time to focus specifically on the narrative, giving over producer privileges might split his bucks, but increase his effectiveness ten-fold. See the sudden leaps Kanye has taken as he has allowed other emcees to get in on a piece of his creative pie, culminating in the genius work that was MBDTF.

Being both a highly capable producer and emcee can sometimes work outside your favor. It’s extremely difficult to be superlative at both, and with the support he’s getting from Roc Nation the world is literally his oyster in potential beat smiths and super producers to choose from. I’d very much not like to meet my sudden end wondering what Cole would sound like over a Pharrell, Timbaland, Kanye, MikeWillMadeIt, Metroboomin’, DJ Dahi etc. etc. beat. You know, like how he sounded free and lucid on his mixtapes. And, speaking of mixtapes…

We Think J. Cole Needs To Forget The Radio Singles

J Cole sounds best not having to awkwardly put out radio singles for a commercial public he kind of doesn’t understand. Exhibit A is maybe the most tone deaf successful rap/pop song ever in “Power Trip” and right on it’s heels is “Mr. Nice Watch” from his largely inconsistent debut effort. So forget the radio singles. You don’t need radio now anyway! In the world we currently live in what you really need is social media to pick up your song and run with it. Youtube views, Vine loops, Pinterest pins, Tumblr tumbles and all that other good stuff is damn near making the radio single obsolete.

So we need him to just make whatever the hell he wants to make and forget about making stuff to appeal to the masses. In today’s climate what does a “crossover single” mean, anyway? No one is selling records so you might as well take out all those dusty ass ideas they told you would never work and make what’s in your cold millennial heart. Plus, it’s the only way for young J. Cole to do the next thing we’d like him to do.

We’d Like J. Cole To Separate Himself From His Peers

J Cole has to have matured musically to a point where he can now successfully navigate his own sound. And by peers we don’t just mean the rest of the folks in his draft class like Kendrick, Drake, etc., I’m talking the elder emcees he often imitates like Jay Z, Andre 3000, Kanye and Nas. He’s a master now, and he doesn’t have to do things students do. No paying homage on this album and no more giving props. Like it or not, Born Sinner saw him go to the All-Star game of Rap, but now we need him to put it all together and win a ring. It’s what defines emcees, still, even in this climate of singles and little to no focus on a cohesive, narrative driven album.

Save us the trite references to women he never got to, and save us the stories about boy/man/girl/woman lost unless they’re pushing forward an overall narrative. I guess I’m saying it’s time for J. Cole to show us what it’s like to see J. Cole in his prime. LIke Weezy’s 03’-09’ or Drake’s right now, it’s what he needs to differentiate himself truly from his peers so that when he says, “I’m the best,” people have to hold their tongue and nod.

A Project That Fully Cashes In On His Enormous Potential

The Rap game Lebron James still feels like he’s scared to take the last shot most times. He’s never taken it far enough, told a story that personifies the inner experience to such a degree that it mirrors and connects to the universal outer experience. Connect those two worlds and J. Cole might be able to build on everything he did better on Born Sinner and create a masterpiece along the lines of Good Kid, m.A.A.d City. What will that take? It’ll take a summoning of his prodigious powers and a pushing of his current boundaries and comfort zone to create and tell the stories we know he can tell. Who is J. Cole?

Is he ready to give us a project that defines him to both the present and to the future? A project that puts his lyrical dexterity, flow and cadence to the fire along with his wild story telling ability and production that convinces you, transports you to another world? The expectations he has to live with must be deafening at times, but it could be worse. We actually want J. Cole to be able to say, “I gave you prophecy on my first joint and y’all all lamed out.” We want to dive back into his catalog with new eyes. We just need the motivation first.

Andre Grant is an NYC native turned L.A. transplant that’s contributed to a few different properties on the web and is now the Senior Features Writer for HipHopDX. He’s also trying to live it to the limit and love it a lot. Follow him on Twitter@drejones.