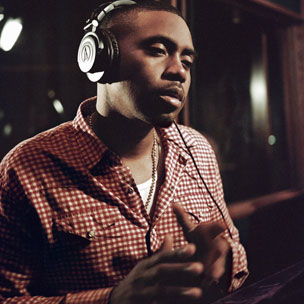 Get Your Mind Right: It Was Written (Unfortunately)

“There is no such thing as a record deal.“

It’s no secret: I am not the biggest Nas fan in the world.

But I do have a tremendous amount of respect for the brother, and I count him among the dopest emcees to ever do it.  That said, it is with genuine concern and great sadness that I’m about to say what has to be said.

In the first week of October an email claiming to be from Nas to record executives at his label (Def Jam) made its rounds on the internets.  The letter is titled “PUT MY SHIT OUT!”.  In the wake of initial doubts of authenticity and stubborn clouds of denial from those of us who grew up on Nas, three things have become abundantly clear.  They are listed here, in no particular order.

The email opens up as follows: “With all do respect to you all, Nas is NOBODY’s slave. This is not the 1800′s, respect me and I will respect you.”

If there’s one theme that Nas has championed in his catalogue, it is the notion that slavery is still very (very) real, both in the lives of black folk in America and throughout the diaspora. For more than 15 years Nas has given us gems which describe neo-colonialism and its oppressive tendencies, and its ongoing impact on the real lives of millions of starving, dying people all over the world. Better yet, skip the history lesson. Check out Distant Relatives, which was released just this year. On it, Nas and Jr. Gong lament the current state of shared oppression experienced in the States, Africa and throughout the contemporary world. In fact, much of his career has been devoted to illuminating slavery in contemporary American society. So to start off with “Nas is NOBODY’s slave” and “this is not the 1800’s” leads me to believe that something has gone terribly wrong in Nas-land. By his own admission (ironically on the first Lost Tapes, no less) he was a slave to Columbia Records.

“I’m a Columbia Records slave, so get paid,
control your own destiny, you are a genius,
don’t let it happen to you like it did to me, I was a Black zombie.”

But somehow now that he has a different label (i.e. Def Jam) he thinks things are different.  Having the ability to choose your master doesn’t make you free.

The next paragraph goes into a diatribe about how record labels oppress artists and miss the point about what the “people” really want.

Complaining about executives exploiting labor is like complaining about bees making honey. THAT’S WHAT EXECUTIVES DO. No one should know this better than Nas! The age-old cliché of rapper complaining about the industry is so familiar that it is tough to imagine any other rapper-stance. Have you ever heard of a rapper praising the industry? Have you ever heard an artist say “Fuck my fans; shout-out to my A&R for believing in me”? Neither have I. Like the token geeky white kid dancing in the video, “shots” at the artist’s own company have become commonplace, dry, and played-out.

Then, the letter becomes almost nonsensical. After an (apparently brief) moment of clarity where he acknowledges the futility of appealing to an executive’s sense of morality, Nas actually proceeds to cite Tommy Mottola and Donnie Eisner as positive examples of what executives should be. Tommy Mottola? Donnie Eisner? Sheesh. I’m tempted to go into Mottola’s career of documented, legitimized immorality, but I won’t. Let me just say that calling out the industry for its problems and then pointing to Mottola as an exception is a lot like criticizing Christmas for its materialism and then thanking Santa Claus. But what I found most alarming was Nas’ version of reality. Nas threatens Def Jam by saying, (and I quote) “I could go on twitter or Hot 97 tomorrow and get 100,000 protesters @ your building..”

Obviously, this is the low point. The idea that people would protest a record company for doing anything (much less not putting out an album) is mere silliness. The record companies control the minds of the listener; they would certainly never allow such a thing to happen. Not to mention the fact that those most interested in this particular issue are the ones least likely to give a fuck about anything other than where the next season of Jersey Shore is going to be filmed. And just so you know that he’s not just playing around, Nas even refers to the Lost Tapes, Volume 2 project as a “movement”.

A buddy of mine once (passionately) tried to convince me that the Lost Tapes was Nas’ dopest, most revolutionary stuff ever, and that it was completely different than any of his other major label stuff because of its realness and its crucial critique of the “system.” He said that the music represented resistance, in a way that the corporate music industry infrastructure couldn’t account for. My response to all of this was simple: “Slow it down, Huey- you listen to all that so-called revolutionary rhetoric and then do exactly what everyone else does: take your ass to work tomorrow.”

As a matter of fact, the only thing Nas has moved people to do is be better consumers. Isn’t it interesting that this is what this whole letter is about? Nas is pissed because the label that owns him (i.e. the label that he sold himself to) is preventing “the people” from consuming a product. Is this a crime? Is this injustice? Read his movement bit a little closer and you’ll see that Nas can’t even successfully differentiate a movement from personal career ambition. No legitimate social movement I ever heard of doubled as a “very important set up piece for a career.” I believe it was the great Bob Marley who once sang:

“So soon we’ll find out who is the real revolutionaries…
And I don’t want my people to be tricked by mercenaries.”

A few garbled rantings about Karma and magical moments aside, the email ends with one final dose of profundity. Nas exhorts his owners to “Stop being your own worst enemy” and “Let’s get money!”

At this point I’m thinking that the only thing more disheartening than Nas’ confusion about his role as exploited labor in the music industrial complex is his hopeless allegiance to it. I’m very sick of black folks trying to get ahead by playing along in a game which we’ve never won. Not ever. In fact, as soon as (through our own brilliance, persistence and ingenuity) we start to win; they change the very rules of the game.1

Imagine if instead of writing a “sorry-sir-please-be-kind” letter, Nas wrote a “fuck-you-then-I’m-out” letter. Imagine if we all stopped begging and pleading for fairness and loved ourselves enough to actually start knocking the hustle. Justin Bieber featuring Raekwon [“Runaway Love (Remix)”

] is not okay. Nasir Jones pleading with jillionaire executives for the privilege of selling black music to white kids is not okay. Once upon a time, the music industry literally depended on artists birthed from the pain, joy, struggles and triumphs of community2. Nowadays that same industry invents, manufactures, and markets artists itself; with no community sensibility whatsoever (yes, I’m talking about Drake).

I’m not judging Nas. Lord knows I’ve done more “sorry-sir-please-be-kind”-ing than I care to admit. I’m just saying that he (of all people) shouldn’t have to play that game. Get Your Mind Right:  None of us should.