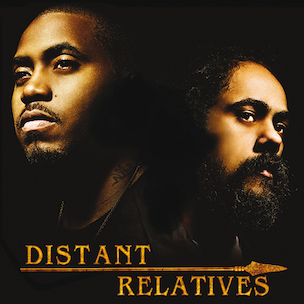 Much has been said about Nas and Damian Marley since they announced their collaborative endeavor as Distant Relatives. While much of it was praise in anticipation, expectations grew to nearly unattainable heights. Both Nas and Jr. Gong are no strangers to this – both sons of famous musicians, both with hits in their history. Each held in high regard within their respective genres, individually, they have managed to forge rich legacies in the streets, while always maintaining a message in the music. With the message behind a project like Distant Relatives – drawing strong parrells between the music of Africa, America and the Carribean, as well as the “one blood” that flows within us all, it would be easy to get too preachy, too informational. Luckily, Damian Marley’s powerful production creates the perfect surface for he and Nas to educate and demonstrate their points masterfully.

Lyrically, the album boasts thought-provoking, introspective writing. Distant Relatives exemplifies the type of lyrical prowess both artists have become known for, with songs like “Welcome To Jamrock” and “If I Ruled The World” in their respective catalogs. The Realtives speak on current events (“My Generation”

), their own triumphs through troubles (“Strong Will Continue”

) and worldly issues (“Africa Must Wake Up”

) with the same amount of dexterity, deftly covering topics with skill and insight. They lend words to the power of loyalty (“Friends”), good fortune (“Count Your Blessings”) and religious beliefs (“In His Own Words”), sharing personal touches with every turn. Both take risks, and balance their master-plan, as Nas candidly forecasts the birth of his youngest child. Throughout the album, Nas and Jr. Gong ask the right questions (“Why do we all collide? Why do the young die?”) and provide just enough inspiration in the process (“Only the strong will continue, I know you have it in you”). They offer the right amount of positive influence with a balanced realism, juggling intellect with lived experience. They also manage to do something few traditionally “conscious”-labeled artists pull off; they never sound corny or contrived. Only artists of this stature could pull of this kind of undertaking. With honest emotion, intelligent bars, enjoyable melodies and fluid delivery throughout, this is a benchmark album for Damian and Nas, both as artists, but also as social poetical prophets.

The production on the album shows just how much thought was put into the project, one that also shows range. Where many have forgotten about the lost art of full length album making, this project is best served whole. Whether mixing live instrumentation with cleverly flipped samples (“The Promised Land”

) or borrowing from various cultures and genres, the beats here do not disappoint. Not often thought of as a Hip Hop producer, Bob Marley’s youngest son (with some assistance from brother Stephen) assert themselves as versatile studio conductors. It’s refreshing, for instance, to hear tribal drums on “Tribal War” following the up-tempo breakbeats of “As We Enter”

. All of this sets the stage for “Strong Will Continue,” which acts as one of the standouts in a heap of uniqye cuts, an anthem that blares with electric guitars, piano keys and a potent drum pattern. They can also mellow things down (“Leaders”), bringing the acoustic guitars out (“Count Your Blessings” and “In His Own Words”) and borrow from various cultures and languages, something heard on chants in “Patience”

“Dispear” and “Friends.” They can go from the accessible (“My Generation”) to the gritty (“Nah Mean”) with ease and keep heads nodding throughout, without ever losing the cohesion that makes this a complete album. Like Madlib, Damian Marley has the ability to make his music sound globally relevant. The production matches the lyrical points perfectly, which may be one of the most challenging achievements on such an ambitious project.

From the moment the listener absorbs opening-cut, “As We Enter,” the chemistry is solidified within Distant Relatives as the two trade bars and this collaborative spirit can be seen throughout the album. Nas’ and Damian’s work together is superb and each guest (Stephen Marley, Joss Stone, Lil Wayne, Dennis Brown and two guest spots from K’naan) fits sensibly with the project’s perimeters, ensuring that nothing is done for show and no detail is spared. Front to back, this album provides no filler and boasts substance. In a genre-bending effort, the duo manages to succeed in creating a best of both worlds collaboration without compromising anything – a feat rarely seen. The relativity between Nas and Marley comes across in this music as well as it does in their message, as both men create a benchmark in their rich careers.