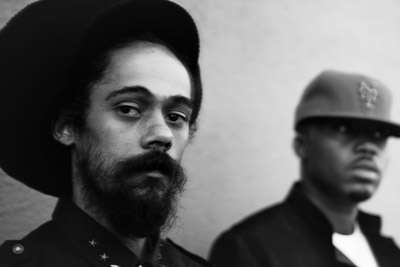 After initial plans for a first quarter 2010 release, Damian Marley & Nas‘ Distant Relatives collaboration album has a concrete due date, set at May 18, 2010. Speaking with HipHopDX late Monday night, Marley expressed his enthusiasm. “It’s a relief. I feel excited. It’s been a lot of work and we’ve been lookin’ forward to [releasing the album].”

While his leading album singles like 2005 smash hit “Welcome to Jamrock” have been summer sensations, none of Marley’s work has been released at a time that many specifically seek Reggae riddims in stereo. Marley explained to DX how he looks at this opportunity in Distant Relatives. “At the end of the day, [my philosophy] has always been to put stuff out when it’s ready, ’cause I don’t believe in puttin’ out music that I’m not satisfied with, or I don’t think has reached its potential in terms of the creative process. At the same time, I’ve never really had an album that was released at the beginning of summer. All of my albums have been previously released in September. I’m really lookin’ forward to what that response will be, knowing that traditionally, Reggae music is what they call ‘summer music,’ so I’m kind of really looking forward to what that’s gonna be.”


two appearances from K’Naan as well as Pop/Soul singer Joss Stone and Reggae legend Dennis Brown, many Rap fans were excited to hear last week’s announcement, courtesy of XXLMag.com, that Lil Wayne will be appearing on the Universal Republic Records release. Damian was asked his thoughts on Lil Wayne bringing a younger generation into his and Nas’ global-minded album.”It’s funny, because the track is called ‘My Generation,'” Damian answered with a chuckle. “It’s definitely geared towards that. [Lil] Wayne really showed a lot of respect in his verse, in the way that he handled it. He handled it exactly how I would’ve really loved him to. I don’t have any criticism at all about what he did. I think it’s a great and blessed track. That’s all I can really say about that.” Wayne’s verse reportedly touches on the one-ness in different cultures, eras and music.

With the newly-confirmed tracklisting, Damian also spoke about the importance of sequencing the album and finalizing its 13 cuts. “To tell you the truth, the tracklisting hasn’t really changed that much in the months, it’s more-so that there’s been some inaccurate listings that people have put on the ‘net. The tracklisting has pretty much remained the same throughout the project. Marley did however admit, “The sequencing has changed. That is a matter of trying to make the album a long-listener, where you can put it in, hear from top, and just play straight through. So it goes off of feel; you don’t want to have too many slow tracks back-to-back or too many fast ones back-to-back for that matter. I just try to make sure that the album feels good throughout.”

The finalized tracklisting is as follows:

Lastly, Damian reacted to the impact of December’s VTech-sponsored Distant Relatives event at the National Geographic in Washington DC that included Hip Hop godfather DJ Kool Herc, Rakim and Dancehall legend Big Youth. “It really feels like something important – everybody feels like it’s an important project. Not just because of the music, but because of the whole idea behind the project, the focus of the project itself – both in aspects of it being related to Africa and us tryin’ to shine a light and educate our generation on that a little bit more and also from the fact that two genres, which we’ve been saying, come from similar beginings and their destinies are intertwined. A lot of people have known that for a very long time, and this whole project has become a platform for us to express it. I’ve seen that it’s not just myself and Nas, but all these other people, who are very credible, have validated what we’ve been tryin’ to say.”

Next Monday, specific dates will be announced for a North American tour that plans to hit almost every American city, as well as dates in Europe. Epic/Decon Records artist Nneka will be the Distant Relatives Tour opening act, as Nas will appear on her official remix to “Heartbeat,” from her album Concrete Jungle.

As of this week, fans can visit DistantRelatives.com for information on the duo, the project and tour dates. The site is going live this week, with full launch expected by next week.

The Distant Relatives will also be performing in South By Southwest this Wednesday (March 17) at Emo’s (603 Red River) in Austin, Texas. They’re slated to hit the stage at midnight, joined by DJ Green Lantern.