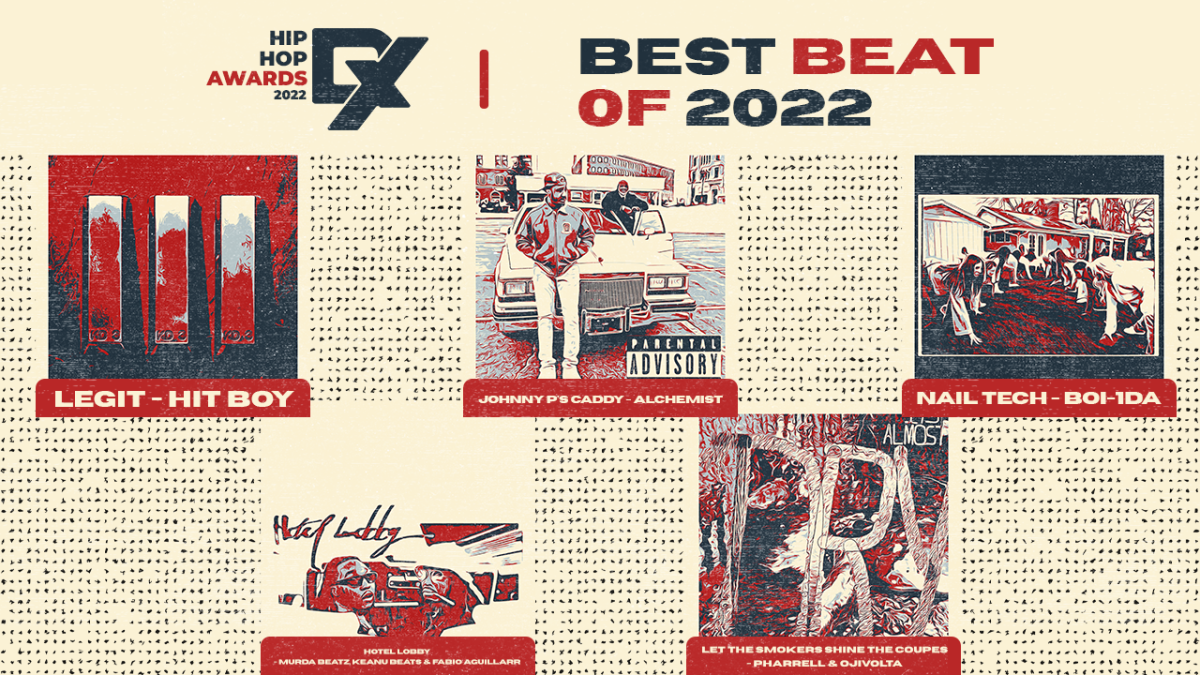 A great Hip Hop song doesn’t come from lyrics alone. Yes, they’re important — it’s a foundational part of the music — but great raps fade from memory without the right beat. It’s not just a timekeeping device, it’s a central part of the mechanism. The right producer can help a rapper find their voice or send them in unexpected directions. A sample takes on a life of its own, adding complexity and new meaning to a musical tradition. After all, it’s the drums that encourage the head nod. When every element comes together, the result is greater than the sum of its parts. And 2022 was an exceptional year for Hip Hop music thanks in large part to the producers that understood this dynamic.

None of the best beats of the year sound anything alike. The psychedelic Atlanta thump of “Hotel Lobby” got functions across the country poppin off, while the soulful boom bap of “Johnny P’s Caddy” brought out the best in Benny The Butcher and J. Cole. Whether it was the trunk rattling urgency of Pusha T’s “Let The Smokers Shine The Coupe,” or the busy and lush workings of Nas & Hit-Boy on “Legit,” the variety of sound is a testament to the breadth of beats Hip Hop encompasses. It’s a living artform, full of innovative voices searching for new modes of expression.

HipHopDX has narrowed down the best Hip Hop songs with the most inescapable and instantly recognizable hip hop production that served as essential backdrops to equally great performances.

Check out the nominees for Beat Of The Year below. 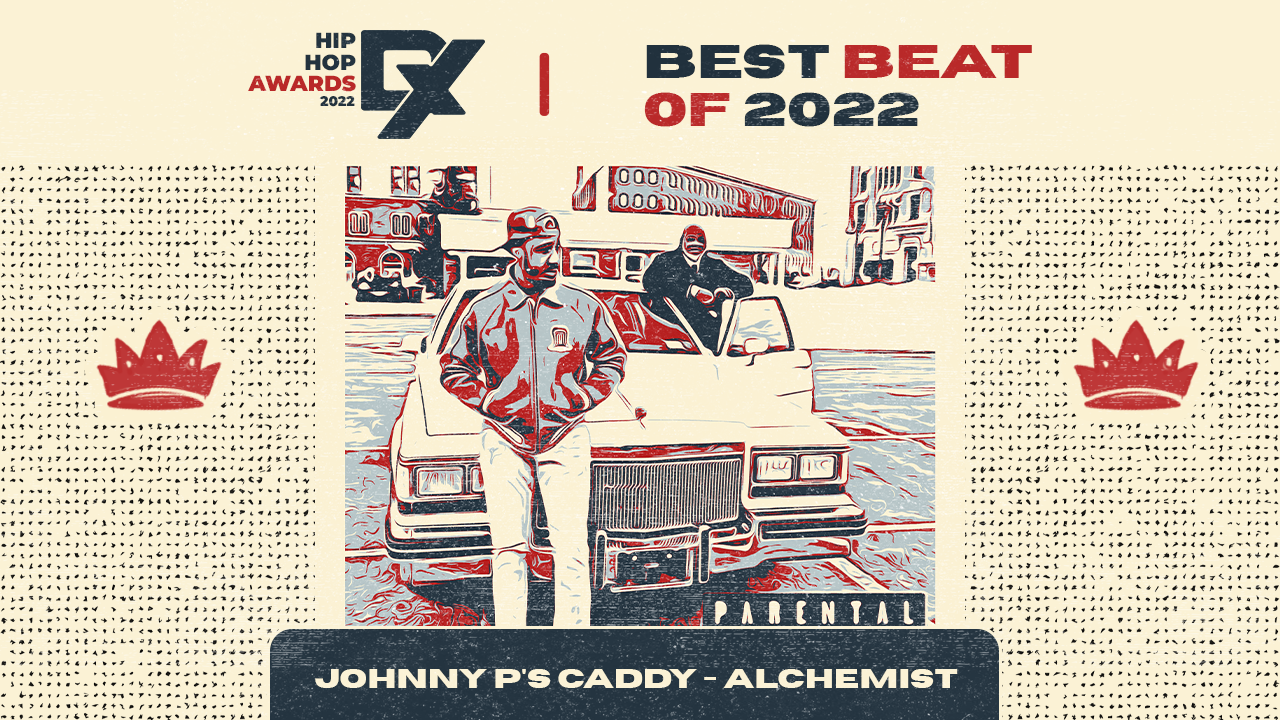 The Alchemist’s genius isn’t found in his ear for samples or dexterity with chopping drum breaks. He’s brilliant at both, without question, but it’s his ability to figure out how to fit into — and expand — a rapper’s world that sets him apart. In a 2021 interview with Complex, Al explained that he starts collaborative projects by getting to know who he’s working with. “If you’re … really in tune with yourself, … you’re making music that is representative of you as a person.” He doesn’t simply make beats for someone to rap on, he looks for insights into their character that dictate the kinds of sounds they need. “Johnny P’s Caddy,” demonstrates that concept to a tee.

Al loops up a sample from a doo wop band, increasing the pitch and setting it far enough back in the mix to obscure the words they’re singing. The drums are dry and open, creating a loose pocket for Benny and J. Cole to kick around in, but the key is the sample’s melody. When paired with Benny’s contemplative verse, it sounds a little melancholic, giving weight to his rags-to-riches bars. Cole, who’s led a much different life than Benny, raps boastfully about his lyrical abilities. The floating voices behind him feel triumphant. Because Al understands who he’s working with so well, he can hear the subtleties of a loop that can change mood depending on context. Alchemist is more than a producer, he’s a world builder, and “Johnny P’s Caddy” proves it. 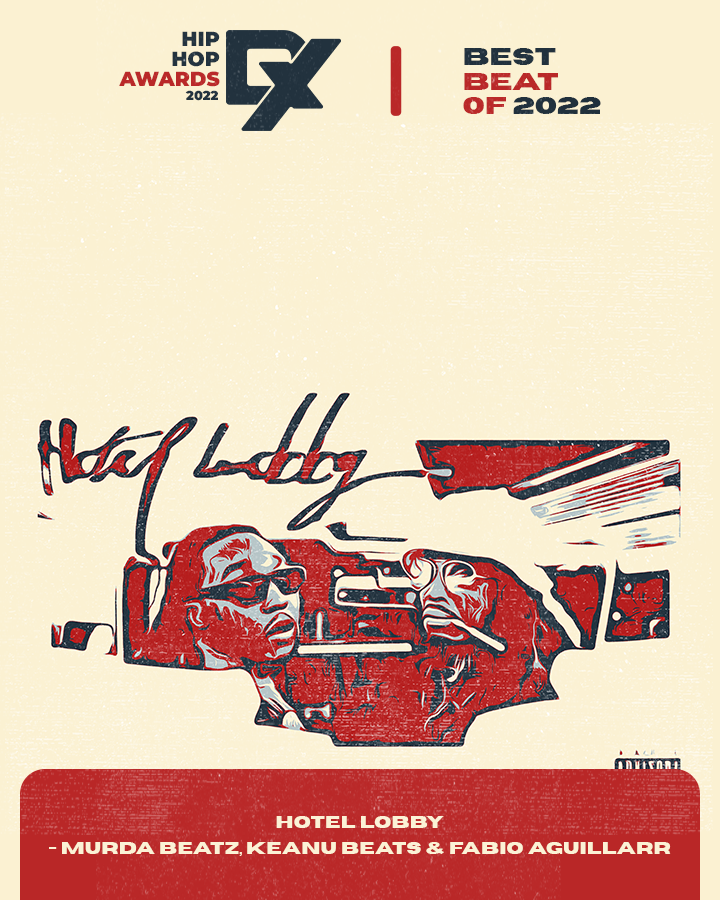 You’ll be hard pressed to find a more thunderously psychedelic radio hit from 2022. Quavo and Takeoff’s “Hotel Lobby,” produced by the committee of Murda Beatz, Keanu Beats, and Fabio Aguilarr, stomps through speakers like a movie monster, towering over everything in sight. It’s brilliantly straightforward: a chiming guitar line repeats for eight bars, followed by another eight bars of an ascending synth loop. The 808s are enormous, the snare sharp, and the hi-hats skitter just enough to propel everything forward. It harkens back to the mesmerizing simplicity Juicy J and DJ Paul perfected on early Three 6 Mafia records; you can hear echoes of “Ridin’ N’ Da Chevy” or “Enquiring Minds” in the atmospheric samples that peek out from behind the wall of bass. Most importantly, the producers keep the tempo at a syrupy drip, creating plenty of space for the two former Migos to flex their acrobatic flows. “Hotel Lobby” is a crushing Platonic ideal of Southern rap music, the kind of trunk anthem you can hear rattling from miles away. 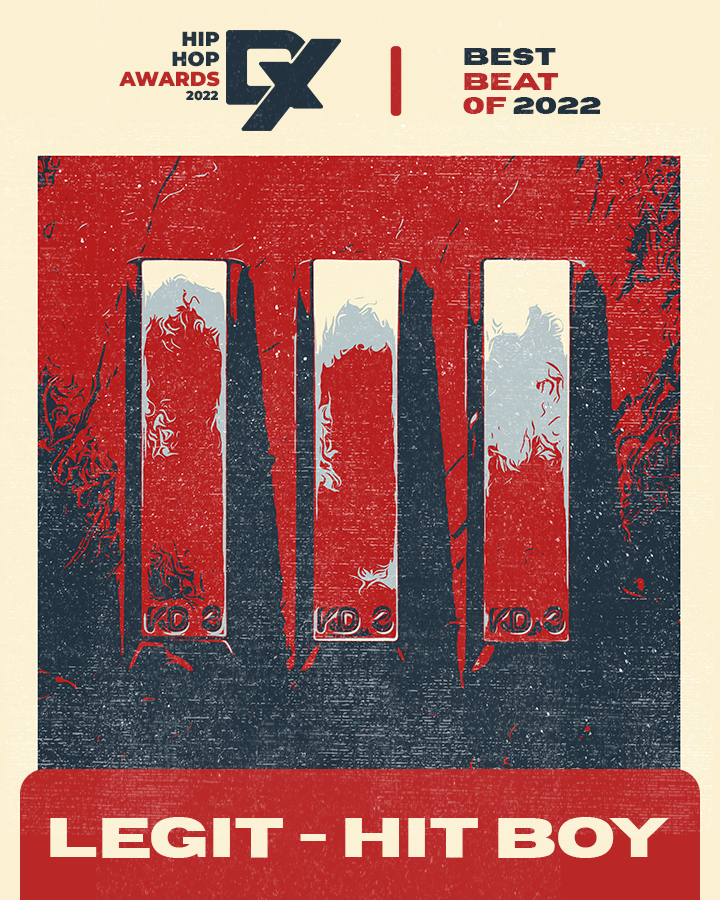 Hit-Boy and Nas’s partnership has been both productive and polarizing. They’ve released four records in the past three years, mostly to fanfare, though how consistent the albums have been is a topic of heated debate. With King’s Disease III, the duo may have hit their stride. It’s the best of the four collaborations and has at least one truly unimpeachable song: “Legit.” It’s jubilant and celebratory, and the infectiously joyous production helps Nas deliver some of his best rapping in a long minute.

There are a few things at play in “Legit” that make it such a phenomenal beat. There’s the element of nostalgia, as Hit-Boy samples the heart-soaring scene from The Five Heartbeats when the band comes into its own, ditching the lifeless lowrider sound that’s drawing boos from the crowd for a stirring rendition of “A Heart Is A House For Love.” Hit-Boy repurposes Duck’s buoyant piano line into the beat’s main melodic figure, overlaying Eddie’s initial vocal. It’s transcendent. The arrangement is more dynamic than most of Hit-Boy’s production, as the beat begins without drums, only to burst into a classic groove reminiscent of “H to the Izzo” halfway through. He doesn’t filter out the crowd noise from the movie scene, either, which makes the song feel effervescent and alive. No matter how you feel about this era of Nas’s career, “Legit” is a joy to listen to. 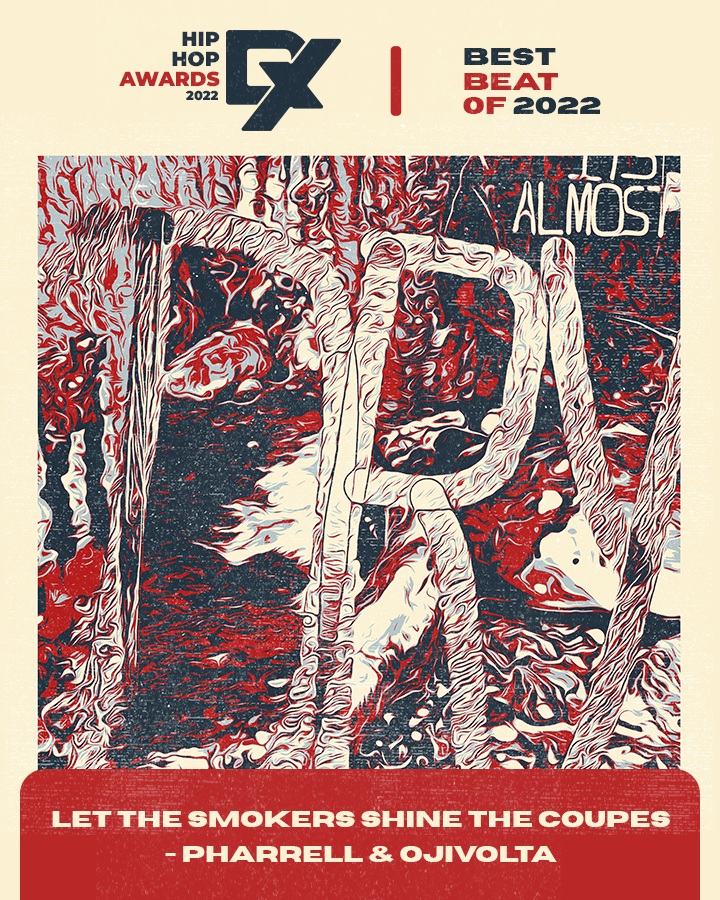 One of Pusha T’s most remarked upon qualities is his precision. His songs are mixed with pristine clarity and his flows often feel diamond cut. He wastes no space. What sometimes gets lost in conversations about his fastidiousness is his willingness to experiment. Clipse records were often outlets for the weirdest Neptunes beats and though his solo career has its share of undeniable jams, their off-kilter nature is often overshadowed by Pusha’s ruthless perfectionism. “Let The Smokers Shine The Coupes” continues this legacy: it’s extremely strange and thoroughly bangs.

On paper, the elements of “Smokers” shouldn’t work. Pharell and Ojivolta combine Brooklyn drill’s rimshot snare and booming bass kicks, syncopated sample stabs that sound like New Orleans bounce, chintzy piano, and drunken breakdowns that feel played by hand. At 100 bpm, it’s the fastest beat on this list, careening forward at a frenetic pace. When combined with Pusha’s flow, which mimics the rhythm of the kick drums and sample stings, its energy is indisputable. “Smokers” taps into that same knuckleheaded intensity as “Simon Says” or “Ante Up.” It demands to be turned up as loud as possible, preferably on the biggest speakers you can find. 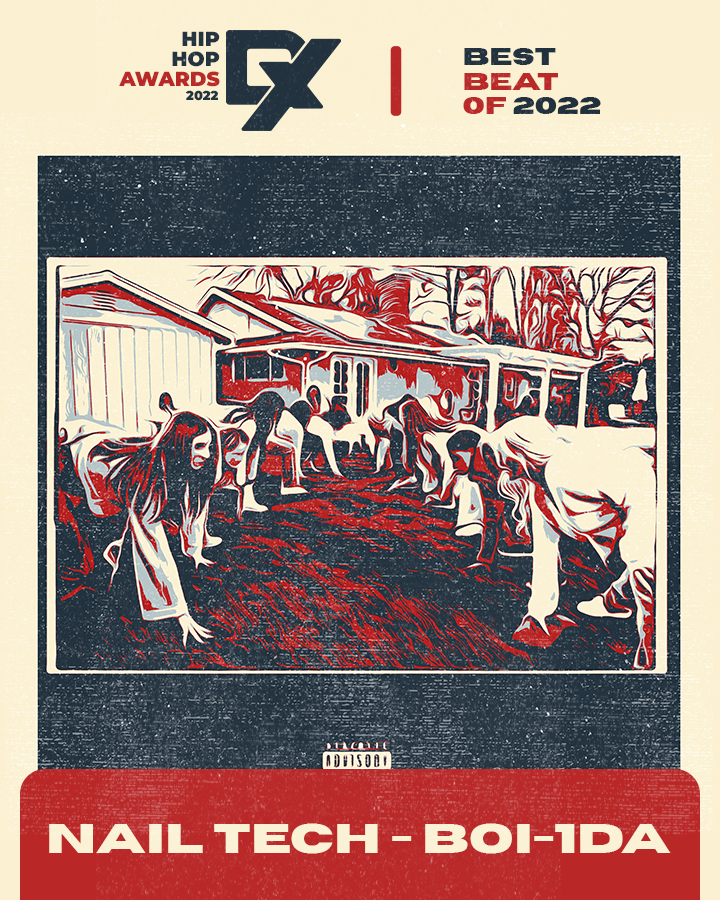 There’s an age-old debate about whether Louisville, Kentucky is part of the Midwest or the South. The city sits almost exactly halfway between Atlanta and Chicago, and the music that comes out of it defies most regional classification. Jack Harlow, the city’s most visible emcee, embodies that liminal identity. He tries on a lot of different styles, ranging from the wild-eyed triple time DaBaby made his name on, to the rushing, confessional verses of his main influence, Drake. “Nail Tech” feels different though. It’s a real earworm, thanks mostly to Boi-1da’s studied beat. He weaves the Southern and Midwestern influences into a distinct bounce that suits Harlow’s nimble flow.

The key to “Nail Tech”’s groove is the ticking hi-hat. Boi-1da keeps it steady, creating the kind of unbreakable groove found in Chicago rap classics like GLC’s “I Ain’t Even On Yet” or “Bogus Mayn” by Crucial Conflict. The synthetic horn sample feels distinctly Southern, as if someone turned the volume down on a Lex Luger track. It’s eminently listenable, sounds great in the whip, and is melodic enough to stay stuck in your head for days.

Return to our Hip Hop Awards nomination page for more categories or check out the nominees for producer of the year, music video of the year and biggest comeback of 2022.

Check out our previous Hip Hop Instrumental of the Year award winners.