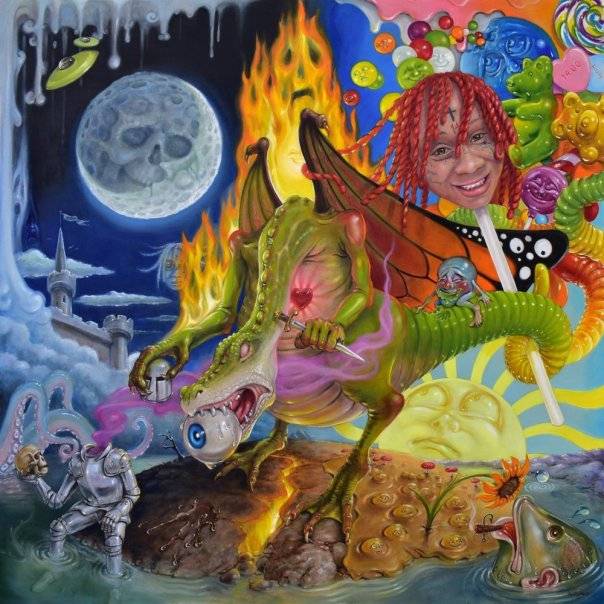 Trippie Redd’s relationship with SoundCloud is stronger than most siblings.

His mixtape A Love Letter to You is an internet classic, featuring lyrics that read like poetry and vocal performances charged with depression, anxiety and paranoia. This, on top of his innate ability to craft catchy melodies, helped Trippie become one of SoundCloud’s biggest artists next to Lil Uzi and Playboi Carti. But as time has gone on, he has tried to shed the style of songs made on a laptop and taken on more experimental and melodic approaches to his music.

Last year, Trippie released Pegasus and its deluxe edition hosted by Travis Barker, Pegasus: Neon Shark vs Pegasus, the latter filled with pop-punk anthems as if he were the frontman of Yellowcard, or (sigh) Machine Gun Kelly.

But his latest album, Trip At Knight has him going back to the SoundCloud well for his source of inspiration. He takes on the production styles of Ken Car$on, Cochise and Playboi Carti, but for the most part sounds like he’s just doing more raspy and gritty versions of a style all three do better. The features span from SoundCloud newcomers like Sofaygo to veterans like Lil Uzi, along with a long-awaited collab with Drake, albeit it’s hard to tell many of the songs apart.

The Drake track “Betrayal,” stands out only for headline fodder, with the OVO Overlord bitter and petty as he takes shots at Kanye West for the umpteenth time: “All these fools I’m beefin’ that I barely know/ forty-four, Forty-five,” he mocks with a snicker and a toothy grin. The obvious cold war between Drizzy and Kanye throws Trippie to the back burner on his own album.

Things get better on the Lil Uzi collaboration “Holy Smokes.” Uzi nearly blends in with Trippie and the production which sounds like it was ripped from SoundCloud in 2017. They shine together on the hook and their chemistry couldn’t be more in sync throughout the track.

But this pales in comparison to “Matt Hardy 999,” where the late Juice WRLD delivers a posthumous performance that sounds like he’s ascending to the heavens as he raps. Trippie complements Juice’s energy, showing why the two had such great chemistry on tracks like “1400/999 Freestyle.”

And Trippie continues to unleash captivating posthumous verses on “Danny Phantom” featuring XXXTentacion. With the poor track record of X appearances since his death in 2018, it’s refreshing to hear a verse that sounds like it was recorded while he was alive, showing how much Trippie cared for his friend.

Trippie’s strongest performance comes with the Playboi Carti assisted, “Miss the Rage.” The stressed horns of the production distort in the background, while Trippie is creating an anthem on the hook, “I can’t see a damn thing, thank guap.” For nearly four minutes, Trippie and Carti create a world where money blinds all of life’s ailments, leaving the listener with nothing but euphoria from the noise. It may be the finished version of a leak dating back to 2018, so many people have heard it, but that doesn’t detract from the track’s greatness.

Trippie can also pull away from the SoundCloud aesthetic when called upon, like on “Rich MF,” a link up with Chicago natives Polo G and Lil Durk who deliver adrenaline-pumping verses with Trippie fitting right in on the chorus.

The problem with the album doesn’t rest in the features or Trippie as much it does in the production. Over 18 tracks, every single one of them sounds the same (outside of “Rich MF”). The beats are Pi’erre Bourne, Star Boy and Outtatown copycats that lack any form of variation unlike beats picked by Sofaygo, Ken Car$on, Duwap Kaine, and Yeat, who have already pulled this off with more originality than Trippie.

Despite this redundancy, Trip At Knight is his most consistent project to date, though it doesn’t break new ground. Arguably, it rips from the new class of SoundCloud artists, but it’s not as big of a deal because those artists helped develop their sound because of Trippie. His willingness to get with the times shows he’s adaptable, it’s just a shame he couldn’t find anything new to say.

This makes Trip At Knight a solid, but ultimately forgettable record despite its impressive sales numbers, a come and go affair with moments of brilliance but not enough originality to stand out in the crowded field that Trippie helped tillage years ago.

tripp at knight album of the year so far, idc if its “the same songs” theyre consistent

Tripp at Knight better than both https://t.co/Fhvse7pGtR