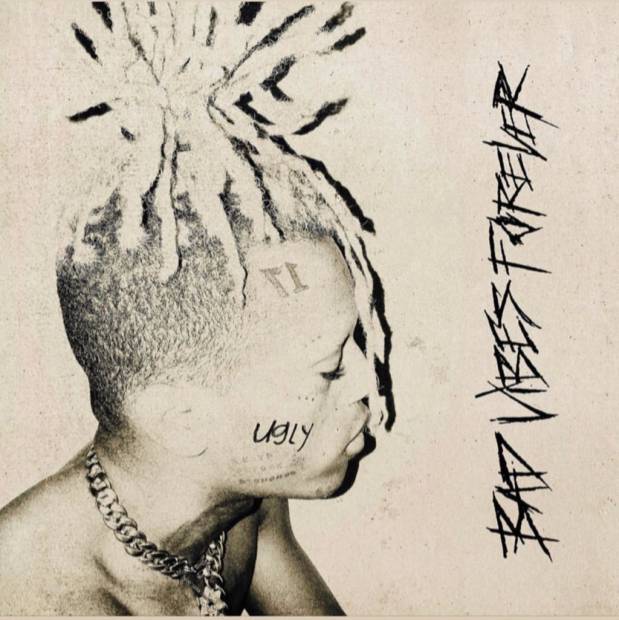 At this point in 2019, XXXTENTACION has as many posthumous albums to his name as he does non-posthumous. It’s the sad reality derived from Jahseh Onfroy’s life being cut radically short due to nonsensical violence; violence that has plagued an alarming amount of Hip Hop’s youth over the past decade. It would be a lie to say that X (who was only 20 years old when he was murdered) didn’t bring some serious negative energy into his own tangled ecosystem — which makes the title of this new posthumous release, Bad Vibes Forever, an eerie listen.
As much as an unearthed classic would delight the die-hards, the closest thing to euphoria new music fans will get are the half-baked songs and snippets from his team’s hard-drive.

For starters, no songs exceed two-and-a-half minutes and it’s very easy to tell that the songs are incomplete. In fact, it would be more accurate to describe the songs as referential voice notes as they often spiral off into ad-lib mumbles where X would have likely filled in the lyrics at a later date. “Ex Bitch” is a perfect example of this reference track style that just follows a ska-rock rhythm with no lyrical dexterity. That said, there are far more acoustic-rock-ballads on this project than any serious rap cuts; an insight to where X might have gone had he been given more time. If the names had been removed from the title track, it wouldn’t be hard to mistake X, Trippie Redd and PnB Rock for a campfire Jonas Brothers cover band.

However, X does happen to show some prowess for rap writing as well. “School Shooters” with Lil Wayne and “I Changed Her Life” with Rick Ross are both very short yet very satisfying rap songs that could have been certified hits had they been more fleshed out.

What’s most striking about this project is how wildly diverse the sounds, tones and flows are throughout. His past projects (posthumous or otherwise) have of course been filled with rap, rock, scream, acoustics and every other form of modern musical expression but Bad Vibes Forever takes it to the next level. Being that it’s his longest album to date with a whopping 25-song tracklist, there is quite literally a song for every type of music fan. Sure, it isn’t executed to the highest level but the sheer attempt and will to produce a kaleidoscope of genres in one fell swoop is undeniably impressive. “Ecstasy” is for the deep house fans, “Hot Gyal” is for the dancehall fans, “LIMBO” for the hard rock fans, “Daemons” is for the backpack rap fans and “CHASE” is for the dark lord worshiper in all of us.

To call Bad Vibes Forever an album is definitely a stretch and even in the single song streaming era, there isn’t one standout track (aside from aforementioned title track) that’s likely to have legs moving into 2020. But of course, that doesn’t seem like the goal X’s team was aiming for. This 25-song compilation renders itself as a gift to the die-hard X fans that are rightfully craving anything new from the late rapper – even if it’s simply lo-fi humming over baselines for a hot second.