Review: Offset’s “Father Of 4” Is A Catharsis He’ll Never Get Credit For 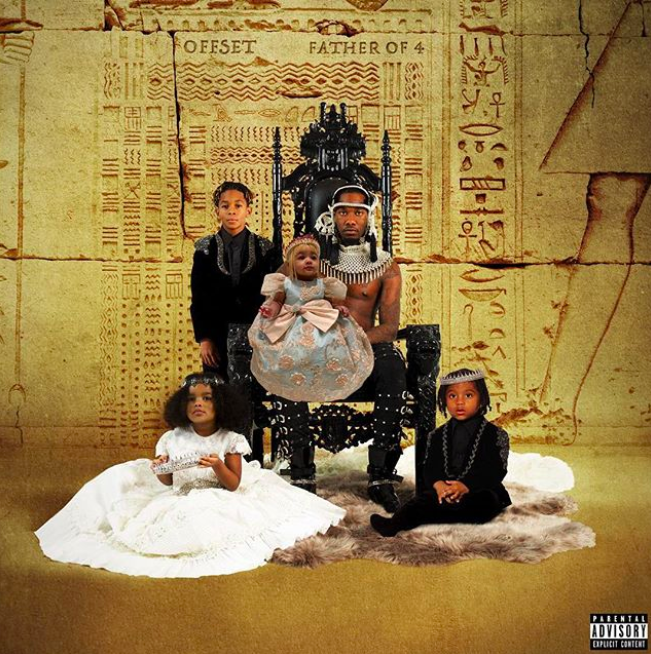 Ubiquity has severely tampered with the Migos brand.

Rewind the clocks back just two years and the Atlanta-bred trio was on the cusp of megastardom (simply because Donald Glover loved “Bad & Boujee” so much) after putting in years of grind just outside of the mainstream’s wandering eye.

But a year later, they were on the cusp of overexposure after they dropped the bloated Culture II onto the masses and followed up with unsolicited solo albums from Quavo and Takeoff.

With the group possessing enough drip music to fill a dozen Rap Caviars, remaining solo rookie Offset wisely makes his debut effort — Father Of 4 an interpersonal affair. As the outright MC of the bunch, the 27-year-old Offset digs deep into his Atlanta Hip Hop lineage, crafting an album that’s equal parts rare in this climate (seeing it follows an unfolding narrative) and refreshing, given its telling content.

From the onset, it’s clear the album’s theme is all about bridging family strength — and no cap, building off his much-ballyhooed Cardi B cheating scandal. The revelation doesn’t disappoint, as an apologetic Offset spills his soul on the woozy “Don’t Lose Me” with unfiltered thoughts: I’m sorry, let me come on home/She said, ‘Put down the Styrofoam’.”

Elsewhere, Offset delves further into the life of celebrity where he blames the blogs (the CeeLo-boosted “North Star)” retracing his past adjacent from J. Cole (“How I Got Here”) and the seminal title track boasts its honesty with a well-placed diatribe from Dungeon Family’s Big Rube (score two points for paying it forward).

Despite having the usual production suspects such as Metro Boomin, Southside and Zaytoven, (among others), the entire album is underscored with stark and daunting instrumentals, giving way to Offset’s detailed lyricism. (The music also teeters along the lines of symmetry or consistency depending on one’s eardrums.)

Ironically Father Of 4’s ambitions to mirror an intentional rap classic are also its shortcoming. About 30 minutes in (a.k.a. after the autobio has run its course), the LP leans on A-list collaborations for C-list results.

Offset and Cardi can absolutely do better than the flossy “Clout” (which feels trite in the causatum of the aforementioned “Don’t Lose Me”). The Without Warning reunion on “Legacy” is anticlimactic and unproven if it’s actually new music from the original sessions. And with a new Migos album in the works, the Quavo-assisted “On Fleek” (do kids still say that?) could have been spun into a more fleshed out idea.

Offset may be easier to say than Kiari Cephus, but on Father of 4, the man behind the gaudy ice pendants and random gossip headlines dominates the spotlight.

Way to man up.