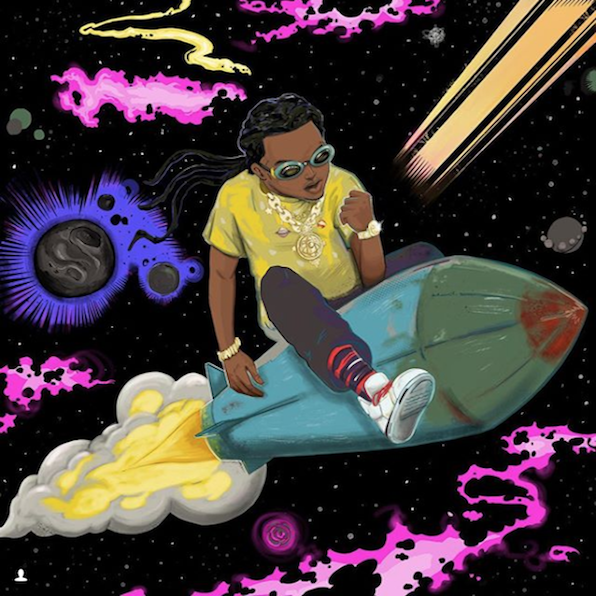 At this point, it’s safe to say that Migos are on the verge of overexposure. As they conquered the Billboard Top 40, Offset became one half of Hip Hop’s reigning power couple and cemented his group’s A-list status. But this ubiquity hasn’t necessarily translated into artistic consistency. While Culture II was a bloated disaster filled with D-sides, Quavo’s recent solo album similarly felt overstuffed. Thankfully, Takeoff’s solo debut The Last Rocket is a welcomed change of pace; it’s succinct, amusing, and has the occasional flare of experimentation that recalls why the trio became so successful in the first place.

The Last Rocket is a loose concept album which in a similar vein to Weezy’s alien alter ego, presents Hip Hop glamour and success as otherworldly and extraterrestrial. Album-opener “Martian” kicks things off with an announcer broadcasting a literal take off. And once the rocket is in space, Takeoff starts dropping braggadocious bars over a menacing, bouncy beat. This bleeds into “She Gon Wink,” a sleeper groove with a strong chorus from Quavo.

Other than Quavo, the project is sparse on features. In the absence of his groupmates, Takeoff has taken a streamlined approach with some tracks not even reaching three minutes. This constraint heightens a solemn song like “None To Me” because it ensures that a dark theme doesn’t get muddled by contradictions. In their catalog, Migos have unabashedly celebrated bling aesthetics. However, this track serves as a nihilistic exploration of the do-it-for-the-Gram lifestyle. On the choruses, Takeoff discusses how designer clothes are “nothing” to him because material wealth is becoming mundane. Despite seeming like the average boast, he later opens up about being betrayed by his own brother: “My brother changed up on me for dead guys / Can’t look ’em in the face cause he got red eyes / Far from I know, he a demon / When I found out he was scheming.”

Another highlight is the lead-single “Last Memory,” an airy, breezy track produced by MonstaBeatz. Takeoff shows an impressive range in his flow, going from ferocious and energized to nonchalant mumbling within seconds. In addition to songs filled with new sonic textures and themes, there are plenty of straightforward bangers like “Lead the Wave” and “Vacation.”

The album’s quality does, however, plummet in the last quarter. Both “Soul Plane” and “Bruce Wayne” don’t add anything new or inventive to the aerospace formula. But “Infatuation,” a pop track featuring Dayytona Fox, is an unexpected, lighthearted curveball. The Atlanta artist takes a break from the trap lifestyle to raps a romantic ode over spongy, groovy synths.

With its brevity and risk-taking, The Last Rocket succeeds at illustrating Takeoff’s talents. Though there’s no outright banger and some filler, this solo album serves as a glimmer of hope for the longevity of Hip Hop’s current favorite trio.