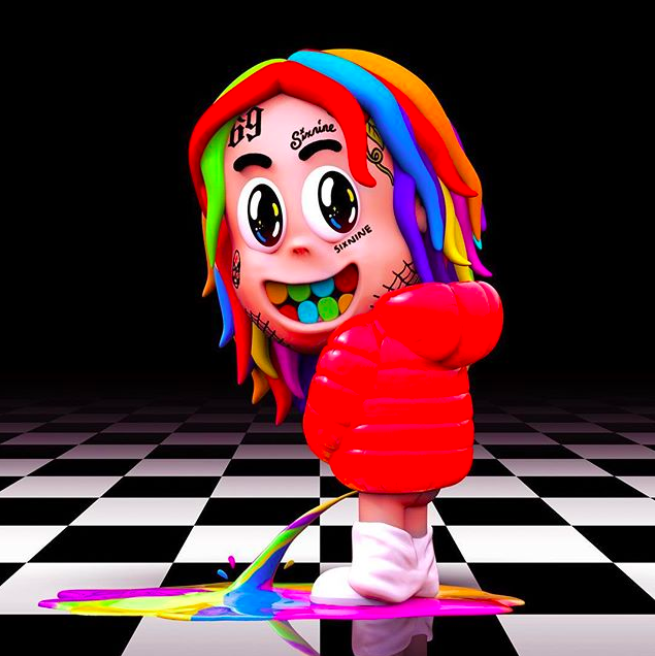 Since exploding onto the scene with 2017’s “GUMMO,” Tekashi 6ix9ine’s burgeoning career has been shrouded in controversy. From the highly publicized 2015 child sex case to his aggressive social media presence, he’s had the cards stacked against him since day one.

But as the Hip Hop community watched his lightning speed trajectory reach its peak, the polarizing rap figure’s momentum suddenly crashed. His tough talk finally caught up with him last month when he was arrested on several felonious charges stemming from his alleged affiliations with the Nine Trey Gangsta Bloods gang.

Now locked up in a New York penitentiary somewhere facing racketeering and weapons charges, the rainbow-loving rapper has to watch his debut album Dummy Boy hit No. 2 on the Billboard 200 from behind bars.

The project itself has already been problematic. Following 6ix9ine’s apprehension, the 13-track album was promptly delayed, only for it to be leaked a few days later. Despite his mounting challenges, 6ix9ine forged ahead with Dummy Boy‘s official release much to the delight of his hardcore (and endlessly loyal) fans.

First and foremost, the album almost immediately sets the listener up for disappointment. “STOOPID” featuring fellow incarcerated rapper Bobby Shmurda is an infectious 1:44-minute banger that seemingly sets a rowdy tone for the rest of the 34-minute effort. However, that’s not the case.

While 6ix9ine’s style is reminiscent of DMX’s raspy yell-rap, whenever the tempo is reinvigorated it’s hard not to envision his multi-colored grill spraying spit everywhere as he screams his sophomoric musings at his audience.

In total, there are four standout cuts that highlight 6ix9ine’s penchant for crafting catchy singles — “STOOPID,” the Scott Storch-produced “WONDO,” “KANGA” featuring Kanye West and “WAKA” with A Boogie Wit Da Hoodie. Otherwise, the Caribbean-flavored love smatterings in between sound like joints that should have been left on the cutting room floor — or handed over to Sean Paul.

Although songs like “BEBE” kindly pay tribute to 6ix9ine’s Puerto Rican roots, his rapping quickly proves to be tolerable in tiny, almost microscopic doses, while the album closer “DUMMY” is like a carbon copy of the homogenized sound currently infiltrating mainstream rap.

Even with the help of rap royalty like Nicki and Kanye, Dummy Boy fails to propel his perceived artistry to another level. It’s a continuation of his unquenchable thirst for attention and notoriety, much like his social media persona.

If 6ix9ine does manage to weasel his way out of his suffocating legal woes, the hype that once surrounded the blindly ambitious 22-year-old “King of New York” might already be a thing of the past.

The album’s saving grace could’ve been manifested in 6ix9ine’s live shows — if he were around to perform it. But as it stands, the music on Dummy Boy certainly isn’t going to provide him the longevity he so desperately needs to stay relevant.