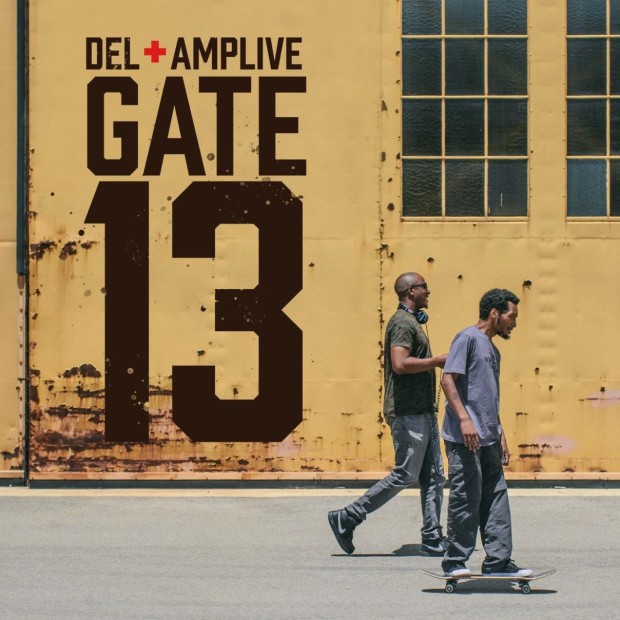 At this stage in his career, Del The Funky Homosapien doesn’t really need to prove his Hip Hop pedigree. As a founding member of Hieroglyphics, the Bay Area native and cousin to Ice Cube has been penning colorful rhymes since the culture was rolling through record stores on training wheels.

For his latest trick, the hygienically inclined MC has enlisted producer Amp Live for the collaborative album Gate 13. Known for his previous work with fellow Bay Area staple Zion I, Amp teeters on the line between EDM and boom-bap Hip Hop. On Gate 13, he leans toward more traditional soul and funk-infused beats while consistently pumping out his signature deep, hard-hitting bass, especially on album standout “Run Free” featuring SIMMI.

Together, Del and Amp have created an intrinsically layered, 17-track Hip Hop gumbo. The heavy synths and operatic singing on “Help” with Adult Karate and fleeting reggae flavor on “Wheel Of Fortune” flex Amp’s diverse production style, creating a challenging soundscape for Del to conquer.

Although the beginning of “Wheel Of Fortune” is a little wobbly, Del hits his stride by the time he gets to the album’s third track, “The Glow.” On the hook, he raps, “Don’t get lost in the glow, the glamour, the glitz/ You just work here/ You don’t know who the manager is,” a reminder to those walking around with an inflated ego to check themselves. It’s a consistent theme throughout the album, something most obvious on the aptly titled “Humble Pie,” one of the moments Del’s storytelling prowess truly takes centerstage.

The song revolves around a violent school bully who picks fights in the cafeteria on the daily. As Del rolls out the story, he reveals the moral with, “Wear the hat that fits you/ And don’t get too big for your britches.”

Things take a short detour roughly midway through the album. The ’80s-influenced “Chili Sauce” featuring James Melo and Mr. MICROwav is easily the riskiest track of the entire project. You can almost picture Amp playing a keytar and rocking a mullet as he crafted the beat for the song. But somehow, it works — and works well. Even with the borderline corny hook, its throwback vibe is too accurate to dismiss (vocoder included).

From there, the funkiness of the “Funkrolla 4.0” interlude flawlessly sets up “Sit Ya Ass Down,” another track that puts Del’s intolerance of overblown ego maniacs on display.

Living Legends MC Eligh jumps in for “On The Ball” and does some of the heavy lifting toward the end of the track while Zyme of the Bayliens raps on “Far Beyond.” Other than that, Del carries the bulk of the rapping duties and allows additional singers to provide even more depth to his eccentric raps.

The “Lateral Thinking” instrumental brilliantly brings the album to a quiet close with its ethereal vibe and shows off Amp’s ability to evoke emotion with nothing more than the pulse of a steady beat. While admission tickets for Gate 13 may not be in crazy high demand like they were during the No Need For Alarm era, Del’s staying power is admirable no matter how you spin it.