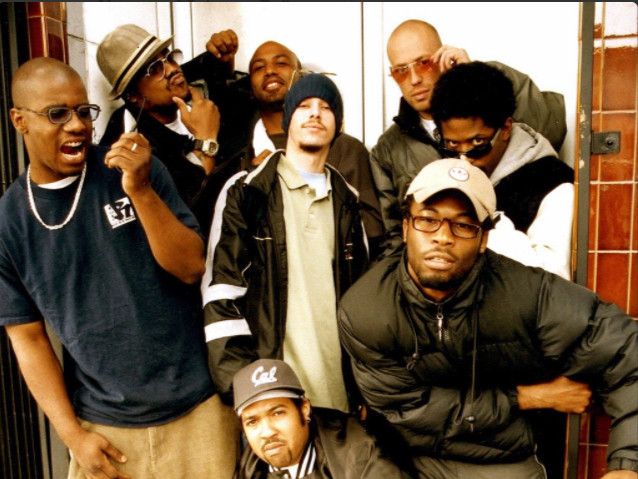 Living Legends Reunite For How The Grouch Stole Christmas Tour

West Coast Hip Hop collective Living Legends — Murs, Luckyiam, Eligh, The Grouch, Sunspot Jonz, Bicasso, Scarub, Aesop — have officially reunited for a regional tour and are hitting the road as part of the 10th annual How The Grouch Stole Christmas Tour on November 30.

Formed in the late ’90s, the Legends rose to prominence in part due to their relentless independent hustle. After 16 various projects, including 2000’s Angelz Wit Dirty Faces, 2004’s Creative Differences, 2005’s Classic, and 2008’s Legendary Music Volume 2, the group called it quits, while several members went on to pursue successful solo careers. In 2015, the Legends briefly reunited for Tyler, the Creator’s Camp Flog Gnaw music festival, which was presumably a catalyst for the current tour, however, Grouch was instrumental in its orchestration.

“Basically, it had been a while since the Legends got together and Grouch got at us to do a reunion tour as part of How The Grouch Stole Christmas,” Sunspot explains to DX. “I’m always down to with my brothers and the time seemed right so I agreed to rock, and the rest will be history.”

“As far as I know, this was The Grouch’s idea,” Luckyiam confirms. “It’s the perfect time to do it. 2016 has been such a trash year, minus the new A Tribe Called Quest album, and some love was needed in the world. I also suspect that Grouch’s younger brother Brad Scoffern had a strong hand in the curation of this.”

Kicking off in Las Vegas, the tour heads down the coast and winds up in Colorado for several dates before wrapping up in Los Angeles on December 14. Dilated Peoples MC Evidence is included on the bill, as well as Eligh’s newly formed trio Grand Tapestry (select dates), and the always loyal DJ Fresh is backing them on the turntables. When asked if this could lead to another album and more shows in the future, Sunspot was clear.

“Yes,” he says. “Like I said, Voltron always needs its pieces. We are the defenders of underground Hip Hop and when we come together, worlds bond with the power of the electricity of the sun.”

“It’s surreal,” Lucky says. “I can only speak for myself, of course, but the last time we all traveled together was 2007, so this is about to be a very interesting experience. I can’t wait to reconnect with the fans and assist them with reliving what a lot of people regard as a very special moment of life. Legends, baby.”