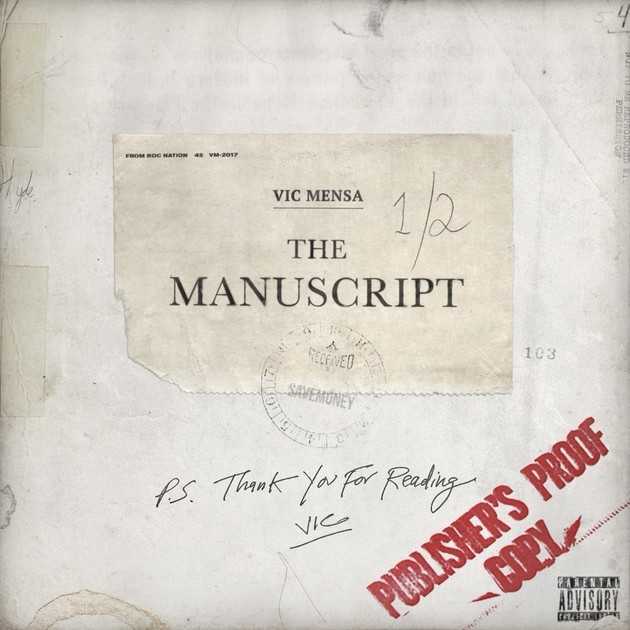 The last time we heard from Chicago’s Vic Mensa — nearly a year to the day — we were to believe There’s A Lot Going On. Given that past revelation, it comes as no surprise then that the politically charged MC opted to release his latest EP on #ComeyDay.

A four-track life update from the former Kids These Days frontman, The Manuscript – the first half of a two-part project – is the latest in the evolution of Vic Mensa, showcasing both his growth and his frustration in a possible peek at a more even-keeled artist.

It takes a level of confidence to start a project with the line “This for all my fans that say they want the old Vic. I’ve grown too much to ever be the old Vic/I’m new and improved call me Vic 2.0, still making two points every time I move an O!” The basis for opener “Almost There” is simple: Mensa is ready to own it.

In reality, it feels like 2013’s standpoint mixtape Innanetape was the launching point, yet in reality the Roc Nation signee has yet to put out a proper debut, something he notes on his stream of conscious lead track “Almost There”: “I tweak on every little thing, that’s why it took me so long / but the album is coming, it’s done for you niggas, hold on.” In the years going forward, Vic developed a Jekyll and Hyde set of personalities; the mad scientist has vented his frustration on a Kanye-esque level on tracks like “U Mad,” while the more suave artist has delivered party-ready songs such as “Down On My Luck.”

Progressively speaking, The Manuscript brings these two Vic’s together, allowing him to proclaim “Fuck Bill O’Reilly” without completely losing his cool on “OMG” featuring Pusha T. After years of ranting and raving, he’s found a way to voice his anger without upping the volume.

Over what has been a lengthy career for a mere 24-year-old, Vic Mensa has worn many hats. Most artists strive for such a level of creativity, but his wide range of styles and sounds has often found a way to become a distraction; as he’s come of age, he’s become man enough to acknowledge listeners will “judge it as you may.” It’s an old musical trope, in Hip Hop as well as other genres: An artist’s first project is often among their best. Old Auto-Tune habits resurrect like “walkers” on the synth-heavy “Rollin’ Like A Stoner,” but both here and on the anthemic finale “Rage” he’s closer to a middle ground than in years past, something that will surely give fans looking for a standout track among The Manuscript hope that one is coming in the near future.

Fans might be begging for the “old Vic,” but won’t be wrong to settle for the newly refined Vic instead.