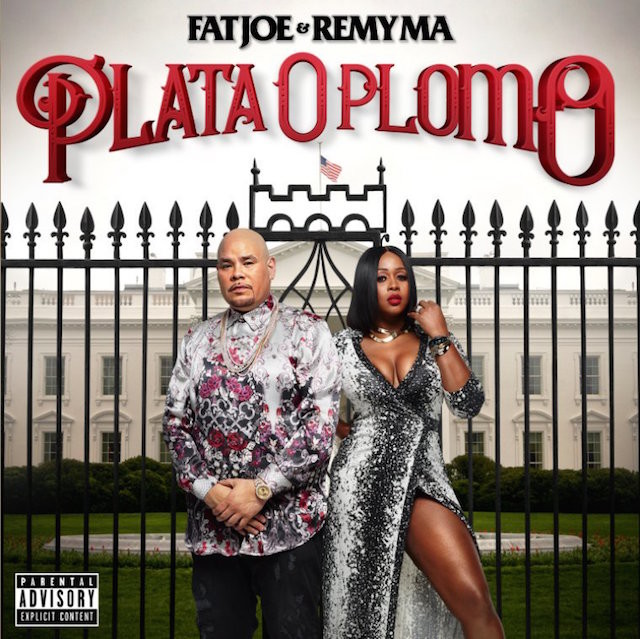 It’s hard to not be happy for Fat Joe and Remy Ma over the past year – especially given the duo’s unlikely-to-succeed circumstances. Joe was given a four-month jail sentence for tax evasion back in 2013 which is really nothing compared to Remy’s six-year bid that ended in 2014. Regardless, they mutually looked down for the count both legally and musically; not to mention the “unforgivable” beef wedged in between them for many of those troublesome years.

But luckily for those beckoning horns courtesy of Cool & Dre and French Montana’s triumphant chorus, Remy and Joe found themselves at the top the charts with “All the Way Up” – a song and moment that has surpassed the lure of “Lean Back” with its Grammy nominations and HipHopDX honors. Fast forward nearly a year and the duo now has a full-length studio album together that unfortunately isn’t nearly as exciting as their one-of-a-kind single.

Naming the album Plata O Plomo carries an interesting and borderline genius theme for both rappers who were literally at a “do or die” point in life less than a year ago. However, that’s where that storyline begins and ends as the suitable Pablo Escobar proverb is rarely mentioned — or even felt. Instead of illustrating the two’s storied past decade, we’re subjected to featured guest choruses scattered throughout songs with no overarching purpose.

Theme or not, nothing on the project scales the magnitude of “All the Way Up” which both helps and hinders. The lack of any other mainstream smash weakens the album’s chart performance and will have the casual listeners default simply to the one chart-topping anthem. “Cookin” attempts to recreate a similar anthemic vibe but falls flat. On the other hand, a few of the remaining songs are actually pretty gritty and will be sure to spark interest in dedicated Terror Squad fans (if there are any left).

Both Remy and Joe bring back that abrasive Bronx dexterity on “Spaghetti” with Rem going particularly hard at some unnamed female rap contemporaries: “Y’all bitches got fat while we starved/Shots in your ass, pads in your bras/Y’all some liars it ain’t no facts in your songs/And yeah that crown is coming back to the Bronx.” The same goes for “Swear to God” in which Joe comes correct but Remy washes him top to bottom. In fact, on all tracks that include substantial verses from both of them, Remy brings out a much heavier lyrical arsenal. Perhaps it’s just a total unleashing of pent-up creativity but whatever the reason, she aims for the bullseye each time out.

If anything, they picked a solid roundhouse of producers to contribute banging beats to this otherwise mediocre release. Cool & Dre, StreetRunner, ILL Wayno and Edsclusive all help with the album’s head node potential but when filler verses fly frequently, there isn’t much a slapping beat can do.

Plata O Plomo was definitely made with the right intentions and features some solid rapping but the most memorable moment remains “All the Way Up” which has since been inducted into Hip Hop’s overplayed archives. Although a concept album or at least a more fabled album, would have been ideal for the Bronx pairing, those records take time to develop. Remy and Joe clearly wanted to feed the streets with some new music in attempts to save the momentum brought forth by their smash single. So instead of taking time to piece together a true BX masterpiece, they opted to just fuse some fluid rhymes over hot production. The end.