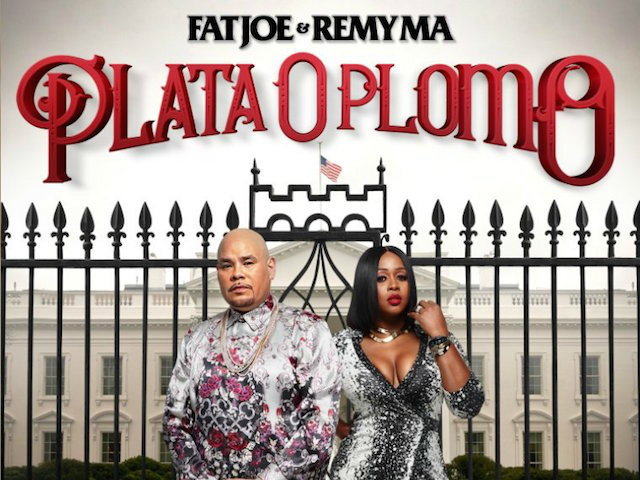 Along with the lead single “All the Way Up” featuring French Montana and Infared, the project (which means “Silver or Lead” in Spanish) is made up of 12 tracks showing the Terror Squad rappers are just as relevant as ever.

Fat Joe and Remy Ma have what might possibly be the song of the year (or at least the collaboration of the year) in “All the Way Up.” The track gave the rappers multiple Grammy nominations, making Remy Ma the only female rapper with a nod this year. The dynamic duo has kept their momentum going throughout 2016 and are looking to take that swing into the next year with their Plata O Plomo album, due out February 10.

This information comes with the official iTunes pre-order, which also shared the project’s cover art and tracklist. Plata O Plomo — which is Spanish for “Silver or Lead” — is made up of 12 tracks and includes an all-star cast of guest features. French Montana appears on “All the Way Up” of course and the project’s other single, “Cookin.” Ty Dolla $ign assists on “Money Showers” and other stars lending a hand on Plata O Plomo include Kent Jones, Sevyn Streeter, BJ The Chicago Kid and The-Dream.

In an interview from March, Fat Joe hyped up the project, saying it could compare to any collaboration between two titans.

“The album is the best album coming out,” he said. “It should give inspiration to everybody in New York City. This shit is phenomenal. Remy’s gonna be rated top. They gonna ask to see if she’s the best rapper on Earth, male or female. That’s how bad she’s going on this album. It’s so fuckin’ incredible, when people hear this album, this shit is so fuckin’ crazy. I feel like God blessed us … It’s like if Snoop or Dre did a new album. Kanye and Jay Z did a new album.”