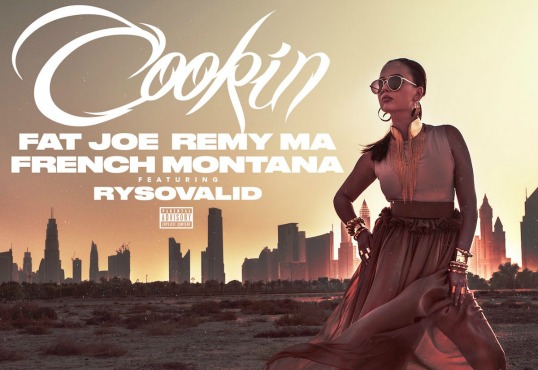 There isn’t a more uplifting story (get it?) in Hip Hop this year than the success of Fat Joe and Remy Ma’s “All the Way Up.” Just watching two veterans from New York earn a platinum plaque in an age where the city’s creative authenticity are constantly questioned was nothing short of inspiring. Let’s not forget about Cool & Dre’s hypnotic production alongside French Montana and Infared’s cherry-on-top swagger. Getting Jay Z on the remix became even more of a symbolic moment. Two questions remained with the single’s success: Would rap fans get an actual release date for Plata O Plomo and what’s the follow-up?

Earlier this year during HipHopDX’s coverage of Power 106’s Powerhouse concert, Joey Crack sang the hook to what would become “Cookin'” Dropping exclusively on TIDAL, the track reunites the duo again with French Montana and relative unknown RySoValid. Does it reach the heights of “All The Way Up?” HipHopDX’s own Managing Editor Trent Clark, Senior Features Writer Ural Garrett and Music Curator Shirley Ju give their thoughts.

Are Fat Joe, Remy Ma “Cookin” Up Another Hit?

Trent: We’ve seen the follow-up clone model several times in Hip Hop before. Such as Ace Hood’s “Hustle Hard” to “Go Get It” or Lil Wayne’s “Lollipop” which shamelessly turned into David Banner’s “Shawty Say.” And then there was the great DJ Mustard wave of 2014. Sometimes the public will blatantly diss a blatant attempt of striking the iron while it’s hot but then again, completely abandoning the fanbase is never a good look on any front. “Cookin'” is the undisputed first cousin of “All the Way Up” first cousin but I would be remiss to say that Joey Crack hasn’t always loved him a good horn melody. His 2002 Loyalty album opener, “Take a Look at My Life,” is one of my favorite triumphant anthems ever created in rap, so there has always been a focus on stadium status material. Whether it hits or not is a totally different conversation. I say “Cookin” is explosive enough to keep the Terror Squadians’ names ringing out well into the fall, now that “All the Way Up” has hit its max potential — Jay Z verse and all. But it does give me a general concern as to how the final album is going to come out. At this rate, it’s shaping up to be a handful of singles with maybe a “real-life” track and another that focuses on lyric acrobatics.

It’s an obvious win for the short-term goals but come next summer, they’ll be back in the rat race. French Montana and Young Cartagena also got an easy victory here.

Ural Garrett: Fat Joe and Remy Ma found lightning in a bottle with “All the Way Up.” A track from two veteran New York MCs that walked a tightrope between the nostalgia of their mid-2000s heyday and realities of contemporary commercial Hip Hop. “All the Way Up” featured enough raw spitting, a catchy hook and production that fit in just enough for the club. The duo did this all while Desiigner’s “Panda” became the talking point of how the Big Apple lost its way to Southern sensibilities.

“Cookin'” has them successfully doubling down everything that made “All the Way Up” so successful and more. The production is more anthemic thanks to the pretty lit horn loops and the drum build up is damn near flawless. French Montana plays the same assisting role and only time will tell if RySoValid’s hook will catch on. However, the lead stars seem to up the ante with their bars. Joe even cleverly mentions “Panda” with his “Bad bitches, mommy with the slanted eyes/half-black, half white that’s a panda vibe” highlight. Meanwhile, Remy Ma is really hitting her stride. “The match chinchilla, my pets been killa/I’m cookin’ like it’s the last Thursday in November / That means it’s Thanksgiving, I’m making baked chicken
/ I’m on my second plate, and your pieces ain’t hittin'” might be one of the best bars spit this year. It’s damn near in my top three.

Plata O Plomo may not have a release date, but between “All the Way Up” and “Cookin'” the album could be one exciting game changer for New York Hip Hop.

Shirley Ju: My expectations for this were high, and I mean really high. “All the Way Up” was/is an anthem, one that always hit the spot. Jay Z hopping on the remix meant even Hov was fucking with it and Frenchie on the chorus was the cherry on top. I’m not so sure about this joint. Remy Ma always delivers, but I’m still underwhelmed. Exactly what is it that they’re cooking? Fat Joe’s son being on the record is cute and all, but for now, I’m not convinced.