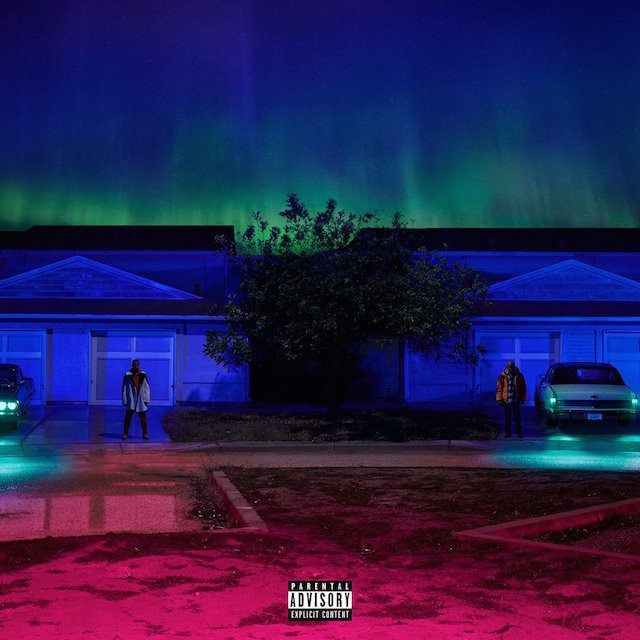 We told you before that every review we submit to the public is a consensus decision. It eliminates bias and adds clarity. Here’s the conversation that led to Big Sean’s rating for his new effort, I Decided.

Trent Clark (HipHopDX Editor-in-Chief): I know I wasn’t around back then but I still think it’s a travesty Dark Sky Paradise didn’t get a 4.5 from DX. If this was the older days where there were fewer artists in the limelight and more A&R attention-to-detail, that would have been his debut album. This album finally shows that he can be that listenable artist for those who doubted him all these years.

Scott Glaysher (One-year HipHopDX Contributor): Well, off top, I think it’s right up there with Dark Sky Paradise. All the songs after the first few listens are really good.

But is he not missing something? Why isn’t he there yet? Why am I not over the moon about it even though I know it’s super tight? He didn’t necessarily switch anything up on this project but when I really think about it, I don’t think I would want him to. I definitely don’t want him to go all Childish-Gambino-Awaken-My-Love! but I feel like I’ve heard songs like “Moves”, “Inspire Me” and “Halfway Off the Balcony” before.

Anyone else feel me on this one?

Ural Garrett (HipHopDX Senior Features Writer): I second Scott’s motion. Nothing about it necessarily stands out, but it’s another solid album from Sean. At this point, Big Sean is Hip Hop’s most popular middle-of-the-road rapper which is an accomplishment in itself post-internet. Does it reach the heights of Dark Sky Paradise? Nah. There obviously isn’t anything as big as “IDFWU” or “Blessings” and nothing as banging as “Paradise.” This might be the time him and Jhené go the Sonny and Cher route with Twenty88.

Trent: I wouldn’t call him “middle-of-the-road.” He’s a great medium between new-gen turn-up rapper and lyricist from the 2000s. He still bars out. See: “Jump Out the Window”.

William E. Ketchum III (12-year DX contributor): Dark Sky Paradise is the stronger album, but I Decided. conveys a more powerful message. The skits and the narrative appear thin on the surface, but the message is clear: give yourself and the people you love flowers while they can smell them. It’s a dope message that resonates with his previous message, without being redundant or boring. It’s interesting how Dark Sky Paradise was top heavy with all the bangers all at once, before setting into the songs with a message for the last half. While this album has those songs all throughout. I think it shows a newfound confidence in believing what he has to say.

Aaron McKrell (Two-year DX contributor): I really like this album. It’s Big Sean in his essence. He’s got quotables for days, of course, but he shines when he gets deep. The touching tributes to family members on “Inspire Me” and, even more notably, “Sunday Morning Jetpack,” are gems. He also continues his Twenty88 brilliance with tracks like “Jump Out the Window” and the all too brief but excellent “Same Time, Pt. 1.” The production is spacey and cohesive, and largely enjoyable. There are a few missteps – “Moves” sounds like a poor imitation of Drake and “Halfway Off the Balcony” is marred by cluttered production – but overall this is an excellent body of work. Is it transcendent? No. Is it going to be the album of the year? No. But it’s very high quality, and very enjoyable. And I’ll be playing songs from this album for months. And that says something.

Favorless: Eminem & Big Sean boiled up some hot water with this one.

What did everyone think of that Eminem feature?

Scott: The Eminem feature was exactly what everyone should have expected; some tight punchlines, angry delivery and of course shock value bait name drops. It’s the type of verse I think we’ve all heard before but hearing a god-level bar brigade from one of the GOATs is always appreciated. With that said, that particular song is one of the album’s weakest – Sean pretty much phones in the chorus and lets Em do all the heavy lifting. Agreed?

Aaron: I wasn’t a big fan of the Eminem feature, to be honest. The lyricism was brilliant, but he’s done this kind of elongated lyrical exercise before and to a better effect (“Rap God,” anyone?). How many times are we going to hear the same angry delivery from Em, not to mention the familiar shock value? It would have been better if his verse fit into the “No Favors” concept of the song.

Trent: When it comes to a reclusive legend like Eminem, you take what you get but that verse didn’t add anything to the mix other than shock value. It’s not wack in the slightest but still. I’m a critic so I’m far from impressed with the Eddie Kendricks sample used for “Light” that Alicia Keys used to sell her Unplugged album. It’s those little things that keep the peanut gallery scoffing when you mention Sean in the same sentence as Kendrick, Cole and Chance.

William The skits don’t add to the album at all. They don’t hurt it, but after hearing Sean speak about the concept in interviews, and considering the fact that he hasn’t used skits before (aside from the interludes on Detroit), I had higher expectations.

Aaron: I don’t think it has so much of a clear narrative as it does a theme through the narration and some of the cuts. The album begins with the narrator speaking about working at a job that he hates for decades, about wondering what’s wrong with his life. It comes full circle on the final track on the album, gospel-tinged “Bigger Than Me,” on which Sean speaks of living in the moment and not wasting your life. That theme is present on songs like “Voices in My Head/Stick to the Plan” and even “Sacrifices.” Sean’s hunger permeates the album and injects it with life, and in that sense, there’s definitely a clear theme.

Scott: I don’t know any more about Big Sean than I did an album ago which is a little disappointing. That isn’t to say he doesn’t’ rap about anything with substance here, he’s simply done a good job of telling his tale on past projects. On this album, there is just really solid rap songs with really solid rapping – simple and plain. Aaron is 100% right in saying that the replay value is there but this is by no means a “classic” or even his personal best.

Does anyone have any song on repeat other than “Bounce Back”? I haven’t totally fallen in love with any one or two yet. I guess this means he crafted an even-keeled album.

Buuuuuttttt … What are this album’s “Blessings” and “IDFWU”?

“Halfway Off The Balcony”: Literally, Figuratively or Lyrically?

Ural: Also there is the reality that the beat for “Bounce Back” was already used on Juicy J’s “Act.” No different than the issue I had with J. Cole’s album and the “Déjà Vu” beat.

Trent: But we know that who won that historic contention ranking. Big singles aren’t necessary to create a dynamic album narrative.

There aren’t enough pinnacle moments on here that would compel me to place it in the allured 4.0 territory. I feel if it were to earn a 4.0 it wouldn’t have any skips but unfortunately, it does.

Does “Voices In My Head/Stick To The Plan” not just sound too close both sonically and lyrically to “Halfway Out The Balcony”? Same with “Light” and “Bigger Than Me”. They’re all good songs but each one doesn’t demand to be listened to again and again. Even “Bounce Back” and “Moves” are basically part one and two of one large “I can rap really fast” song. One thing I do have to give Sean props for his constant ability to tackle any beat. “Bounce Back” sounds nothing like “Same Time Pt. 1” which sounds nothing like “Voices In My Head/Stick To The Plan”. The production was very well done simply because he primarily used the same rotation of beatsmiths. Amaire Johnson handles most of the production with people like Metro Boomin, DJ Dahi, Detail, Key Wane and WondaGurl all lending the project their signature components.

But again, he performs well throughout the entire 50 minutes but not uniquely enough for 4.0.

Trent: A 3.8–3.9 severely underplays the quality control put on display here. A lack of pinnacle moments keeps him from touching the realm as to say a Chance The Rapper’s Coloring Book breached but this is definitely a 4 or better.

William: I’m not crazy about Stick to the Plan and I like the beat to “Jump Out The Window” a lot, but the production doesn’t match the song topic at all. I was jigging to it for days before realizing “wait, he’s trying to save his homegirl from an abusive relationship??? With repeated listens, the overall album concept is clearing up more than it was before. It’s still not good kid, m.A.A.d. city level or anything like that, but it’s not as weak as I thought it was before either.

Aaron: I’m glad you came around, Will. I really like the concept. I found the narration to provide a poignant undercurrent to the album’s theme. There’s also something to be said for the narrator’s aged but unwavering voice. It provides the ideal tone for what Sean was going for.

William: Yeah. I enjoyed the way he played with flows, melody and song structure a lot here. The middle portion of the album reminds me of songs like Kanye’s “Flashing Lights,” which are more focused on being exploratory sonically and structurally instead of conventionally telling a story from beginning to end.

Ural: If naysayers didn’t necessarily find themselves appreciative of Big Sean’s work after Dark Sky Paradise, this definitely isn’t going to get them on board now. However, he does maintain his ability to probably make better widespread songs than his peers that can travel from the club or radio to core rap heads. This is why he can call himself a member of the highly exclusive “I have an Eminem feature” club while making Metro Boomin-produced bangers like “Bounce Back.” Stat Quo said that he had a problem trying to be something for everyone, but Sean is really the only artist out there that can legitimately do it all. Is he the best at that? Nah, but it’s better than a lot of artists who try to cater to one specific demo. In this day and age, that’s an accomplishment on its own.

Trent: I think it’s a pretty fluid listen and he’s definitely coming into a great zone as an artist. That being said, his biggest crime here is not losing himself B. Rabbit style and taking it the next level. After an album like Dark Sky Paradise, it’s time to go for a classic, not settle for low-key ruminative grooves.