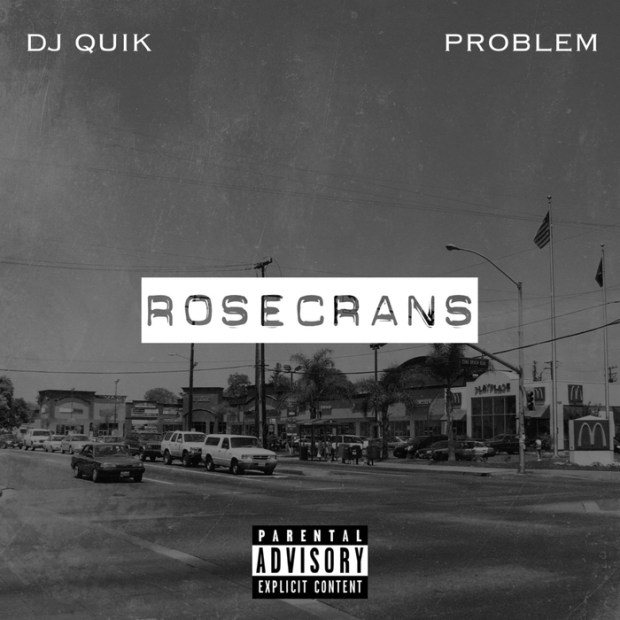 Over the course of Hip Hop history, rappers have always celebrated their hometowns in their lyrics. In recent memory, the West Coast has found a refreshing way to honor the inner cities of L.A., encapsulating moments for out-of-towners to feel as if they were right there living it. After the praise Kendrick Lamar, Dr. Dre, and The Game received for their conceptualized albums for Compton, Problem is carrying the baton of historic tributes on Rosecrans with 90’s G-Funk pioneer DJ Quik. The six-track EP is a laid-back listen, honoring the traditions of G-Funk and spotlighting a young Compton rapper’s ambitions to cement himself among California Hip Hop’s gatekeepers.

DJ Quik and Problem previously collaborated on Snoop Dogg’s Ego Trippin’ album in 2009. Back when Problem was a ghostwriter and producer, the initial meeting created a chemistry found later on Problem’s “I’m Toe Up (Remix)” and various other collaborations that never saw the light of day. “We just got hella close. I’ve been fuckin’ with Quik for years,” Problem told HiphopDX last month. “Recently, we were in the studio a lot just fuckin’ around and doing good music for no real purpose or reason. I’m like shit, no point in just leaving this shit here, let’s do a project. He was with it. If Kendrick is with Dre, then I’m with Quik.” The analogy bodes well: Quik and Problem bridge a similar generational gap for today’s rap fans, repurposing a sound that has shifted the “who runs Hip Hop in 2016?” conversation to LA. Hell, a song like North Carolina-based rapper Colonel Loud’s “California” wouldn’t be the go-to feel-good record if it wasn’t for the West Coast’s resurgence right now.

On the six-track EP, Rosecrans Avenue, a long thoroughfare that starts from Manhattan Beach and crosses through cities like Compton, is the subject of Quik and Problem’s breezy rhymes that flow near effortlessly over their lush and clean production. The first couplet sung by Candace Boyd on “Rosecrans” is “got my windows up, cause my niggas rolled up/as we riding down Rosecrans/Hit the bottle on the low, look around to make sure/cause we riding down Rosecrans,” which immediately puts you in the backseat. The Game delivers a prideful verse about what he’s done for the city, like bringing Dr. Dre and Drake to his neighborhood, but it’s Quik who sets the stage: “I am the abominable DJ Quik, and I’m here with my boy Problem.” Buckle up and get ready to ride out.

The rest of the tracks fit in line with what Quik is known for: crafting fun songs that don’t sell-out to modern trends. While guests like Wiz Khalifa, Buddy and Bad Lucc come along for the ride, the best track on the EP is “A New Nite/Rosecrans Grove,” a remake of Quik’s early 1991 hit “Tonite,” that extends to about 10 minutes long. The song starts off with Problem referring to the bleeps and blips in the instrumental as “is that my motherfuckin’ pager going off?” It’s a perfect lead-in to the song’s smooth vocals of Shy Carter and excellent verses by the Problem and Quik, where the latter even raps “now this the kinda beat that I might need Dre on.” The second half is a sonic epic, a free-forming jam session that morphs as listeners hear elements of jazz, experimental synths and even a vocoder get introduced until the song fades away.

Songs like “Take It Off One Time” and the EP’s closer “Straight to the City With It” are Problem’s most cohesive songs to date, giving him the needed edge to potentially have another mainstream hit with the same accessibility as “Say That Then” and “Like Whaaat.” As for Quik, his late-career revival after The Midnight Life continues to cruise, delivering detailed instrumentations that are seemingly timeless. Who knows if this pair will reunite again for an official full-length (Problem says he had to beg Quik to actually rap on the project), but Rosecrans is a digestible body of work that fans shouldn’t rule out a possibly of another collaboration.