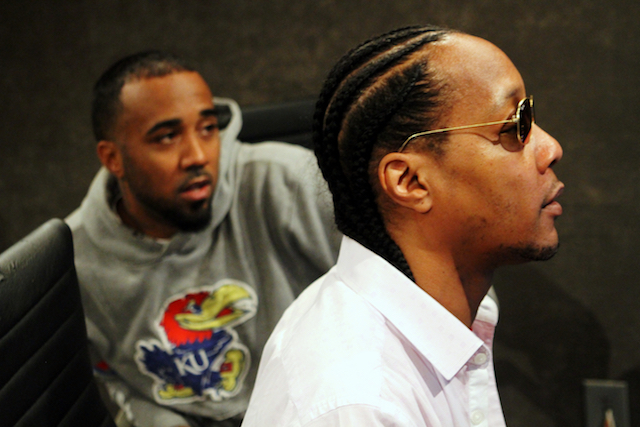 On Monday (April 18), Diamond Lane’s North Hollywood recording studio was far more packed than usual. For a few hours, guests, entourage and everyone in between are watching DJ Quik mix and master his joint EP with Problem, properly titled Rosecrans. It sounds good enough to release to the public as is, but Quik is being the perfectionist that gave Hip Hop Quik Is The Name. Linking up with the “Like Whaaat” rapper shows West Coast unity is generational as well.

By the time Problem makes it in from a quick video shoot in Las Vegas, the real listening party for the project properly dropping on 4/20 begins. And to think, weeks ago, DX stopped by the studio to talk the making of his last mixtape, Hotels 2: The Master Suite, which hit the net last month. After hearing a few snippets and promising to keep the secret, the conversation had to be about Rosecrans: Problem co-producing and rapping with Quik, lessons learned and the workflow between both rappers/producers.

HipHopDX: Before we get into the project with Quik, you just dropped Hotels 2.

Problem: I wanted to gear this whole project toward women and the beauty of them and their independence. Not just the one type of women. Not just the bad chick or ratchet, just women in general. I wanted to give them a CD or album to turn up to. Get it all the way off to in different kind of ways. On another note, the fact that Hotels 1 was so dope with DJ Hed. The hold he has on L.A. radio right now is just crazy. Just to show the growth of us five years later was important to me.

DX: You and Quik have been connected for quite a long time. How did that relationship develop over time?

Problem: Man, we met during Ego Trippin’ project and Snoop brought him. We just got hella close. I’ve been fuckin’ with Quik for years. Recently, we were in the studio a lot just fuckin’ around and doing good music for no real purpose or reason. I’m like shit, no point in just leaving this shit here, let’s do a project. He was with it. If Kendrick is with Dre, then I’m with Quik. That’s the way I look at it as. Even with the road taken. He was independent and did his own thing. He was about the females and turning up.

DX: Do you remember your first interaction around the Ego Trippin’ sessions?

Problem: When I came over during those sessions, he was the only blood in there. I don’t gang-bang, but I grew up with Pirus. He gravitated from that and he knew I had some hustle in me. He never saw me write and go home. He’d see me write a record, go record my stuff. I did “I’m Fucked Up” during that process. He was seeing how my get-down was and he would give me game. Then there’s the moment where it was like 1:30 in the morning in Compton, I got a call from Terrace Martin telling me he and Quik were pulling up. I hear him in the background like, “I gotta pee, Blood.” I wake up and he’s like, “where the bathroom at.” I was staying with my Auntie at the time. I want to wake them up, but it’s early in the morning. I took a picture of him by something in the house. Then he was like, “I’m about to head to the studio right quick to make some linguine and apple pie.” It’s been lit ever since then.

Problem: That nigga Quik is a world class chef. I think he has something in works with the Cooking Channel or whatever.

DX: Why name the project after Rosecrans Ave?

Problem: The project is called Rosecrans. that’s a very big street in Compton. It’s the one street that goes through the whole city. It’s crazy because I don’t want to talk about it like its an album because it was never the point. We were just doing dope records. “This Is Your Moment” is a fun record and you got “City Limits” just giving up for the city.

“I Basically Learned How To Craft Records Because Of Him”

DX: You just likened your relationship with Quik like Kendrick’s is with Dr. Dre. Dre’s albums have always been looked at more as collaborative projects than Quik’s more streamlined solo joints. What was the workflow like?

Problem: It wasn’t hard because at first we were doing records. We produced four together. It was more so like that makes the best song. Quik got the musical ear and I’m a drum dude. That’s my specialty of when to take them out, when to cut, making them boom and echo. We just stayed in our pocket. I never went over there like, “I need you to add this nine or seventh chord” because I don’t know what the fuck that is. Quick didn’t ask me to do anything on the drums so we pretty much knew what it was.

We just really produced records together. It’s crazy. He’s doing the drums and this dude comes with the guitar and his process of making music is crazy. We had Wiz come in there one day to turn up. It was just beautiful and a good time. These records had to be heard. Just for the city as a whole, we need more joint shit just inside of the city. Compton is beautiful right now. We got one of the biggest artists in the game right now. Salute to Kendrick. YG doing his thing man. The city is on fire. Lets keep it lit.

DX: Did you learn anything from Quik in terms of your own approach to music?

Problem: I’ve been around in the background with dude for so long. I basically learned how to craft records because of him. I knew what it was when I was in the studio. Just fun and a good time in the music. The record came out so spontaneously. I was able to get it off. It’s just crazy. I’m just happy to be surprising people.

DX: How did that approach lend itself to the lyrical component?

Problem: The first record we cut was “You Are Everything.” That’s the first record on the project. They had the beat up and I just felt it. I’m in it and I got in for just two minutes straight. While I’m going, he just stopped the record and said, “This is the same way I felt when ‘Pac did this record.” I was like, “What? He’s actually producing me.” Then I asked if I could fuck with the drums and he said go ahead. I got down, chop it up and add the 808s making it go into some other shit. Then he was like, “This is going to be easy.” He can leave the room and I can leave the room. That’s the hardest thing with producers/rappers. It’s a trust thing with it. You know what you want it to sound like, but a lot of people don’t know that you know what you want it to sound like. The literature is sometimes hard. Once you get that done, that was the first record.

DX: Getting Quik to rap again?

Problem: The fact that I got him to rap on it was the hardest part. He wanted to just produce and I’m like, “It’s no way in hell I’m getting out of here without you getting on.” It was a lot of that. He told me he wasn’t going to rap no more. I remember him telling me that.

Problem: I begged DJ Quik. Ain’t no talking DJ Quik. I begged. I said, “Dawg, you don’t understand. The city as a whole from the old to the young is going to go crazy.” It’s not typical.

DX: Just to wrap this up since I know you’re still working crazy. Outside of Hotels 2 and Rosecrans, any update on the Diamond Lane & Jamla project you mentioned late last year?

Problem: It’s done. It’s just about understanding when we want it out. That muthafucka Bad Lucc and Rapsody. I get to spar with these two? Damn. And, Rapsody is amazing. Her new shit is fuckin’ flawless. I’m on there for sho. Had to be on there.