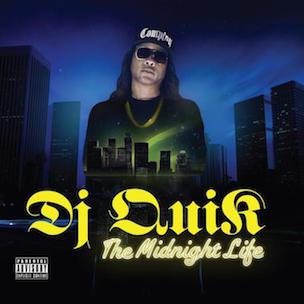 DJ Quik has long been a producer’s producer. Stories of a diaper-aged Quik able to play sound-association memory with his mother’s record collection help explain his early-developed and practiced ear. In a genre that so often applauds beatmakers for channeling musicality in sample form, Quik is as capable of ushering it into life on his own. His hallmark as a solo artist and Hip Hop producer, both as a sampler as well as a self-appointed session musician, has been a perpetual knack for funkiness, proving like his forebearers that it can be found nearly anywhere. On this album’s first song, Quik loops a banjo riff after a tongue-in-cheek, dare-me-not-to intro that alludes to the instrument perhaps as Hip Hop’s next big thing. The intro/track duo is a bit of a playful red herring though, and while there’s a comedic element to the banjo’s placement and Quik’s own satire about it, he makes it work, gliding over top with crass sex jokes and slick threats. Come at Quik? He’ll cast a spell and “you’ll be stuck.” “That’s the voodoo that Pirus do / That fly crews do / That fire on tired niggas that block cock like you do,” he raps, more fly shit-talk than actual menace.

As a solo artist and rapper, Quik’s quirkiness and off-kilter, conversational delivery has kept him outside the realm of commercial palatability. Now on his ninth album, the previous eight built him up as regional hero, leader of a cult of savvy groove-seekers, and slept-on super producer in one. The last several years have allowed Quik some deserved critical acceptance though, thanks in part to the release that preceded Midnight Life. The Book of David was smart and sporadically morose, the producer/rapper confronting the most recent of his life’s many griefs, specifically an outright hatred for a sister that he admits to slapping up after she apparently plotted to kidnap his children. By contrast, on Midnight Life, Quik sounds happily and productively surrounded by family and friends instead of glancing at them sideways, even if new and public family tragedies have popped up between the records. Quik still waxes plenty on some of his life’s hardships with “Puffin the Dragon” as the album’s stand-out moment of grave reflection. As ever, he wills some self-gratifying comedy into a verse that also glosses over random twists of catastrophe—“Before my face got stubble / My house burned to rubble”—and smacks of his begrudging attitude towards being underappreciated. The song is the third in a string of five (or potentially six) unskippable tracks that anchor the middle of the record, starting with a soulful, conga-laced interlude that would make Marvin Gaye proud.

“Pet Sematary,” which follows immediately after, is Quik’s most deliberate bit of R&B-infused-Gangsta Rap ambassadorship. The track is a reminder that despite a renewed spotlight on the West, something has been missing. There’s a down-to-earth localism in Quik’s gangster alongside the G-Funk: “I hit the liquor depot, on Crenshaw / Where all the working class G’s go / Around the corner from Greg house,” he raps to open the album’s first single. Here again, he also leaves behind abbreviated moments of bitterness, like, “Anything I do for music’s never celebrated.” Few people will laud Quik for building such a vibe out of an unconventional five-bar arrangement, but when he mentions the stuff in interviews, you can tell he geeks out over his own tinkering. His rapping has never been particularly innovative or showstopping, but his talking-over-tracks approach makes his Gangsta R&B supremely affable and his character enduring. Nevermind that Quik might steal your girl, partying with him sounds irresistible.

Quik is a fantastic melodic writer, but the actual shape of the basslines and synth riffs are equal characters in his arrangements. After lacing beats with gear like Moog and Roland keyboards for much of his career, Quik abandoned analog sounds for several albums before returning to them for Book of David. Here again he sounds organic as ever, and even the most contemporary tracks—“That Getter” is a timely West Coast banger—inflect with sounds like a synth stab that’s worth marvelling at all its own: crunchy, sharp, jarring. “That Getter” is also one of four songs that feature Quik’s son, David Blake II, as a rapper. Before he appears, Quik seems to whisper advice in his ear: “Remember, if people don’t like you, that means they see you as competition.” Blake II is an entirely different type of rapper than his father, certainly timelier and agreeably stylish but not as distinct.

Particularly as the type of absorbed fan to read album credits himself, Quik has been grievously robbed of the public acknowledgement he deserves, both in the absence of his name on song and album credits—his lending kicks and snares to Dre for 50 Cent’s “In Da Club” is probably the most open secret of his ghost-in-the-mix moments—as well as his underappreciated role in the narrative of the rise of G-Funk in West Coast Hip Hop. Midnight Life again refocuses Quik’s gaze inward; well into the third decade of his career, he’s still turning over new sounds, breaking little bits of ground in the process. It’s also a reminder that if Quik sticks to his word and quits after his next and tenth album, we’ll all miss moments like these. He’ll likely slip back into the shadows either way, but it’s always been a different type of fun partying with him instead of mysteriously because of him.