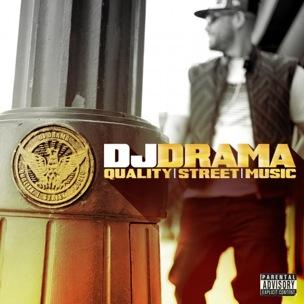 DJ Drama has been a relentless force in the mixtape scene for nearly a decade now, with his success in executing full-lengths landing somewhere around commendable. It’s clear that he realizes there’s a stark contrast between delivering a front-to-back solid project and feeding listeners’ mixtape after mixtape for sheer relevancy, and that role plays out appropriately on Quality Street Music.

With literally every artist under the sun at his disposal, DJ Drama does an impressive job with his collaborative pairings. Over a minimal yet effective Hit-Boy beat for “My Way,” Common and Kendrick Lamar leave a trail of lyrical relics while Lloyd brings the record home through his booming vocals. Then on “Never Die,” Jadakiss, Nipsey Hussle and Young Jeezy vividly depict a reality in the streets that is all too familiar for them (“I’m down the block from the shootin’, it started to sound like recruitin’ / Seein’ niggas I grew up with sleep to funeral music”).

“Clouds” is another match made to excellence. With lavish production courtesy of V12: The Hitman and crooner Miguel setting a luxurious scene, Rick Ross, Pusha T and Curren$y let their female counterparts revel in the fruits of their labor. Even the perpetual middle finger of “Ima Hata” succeeds as Waka Flocka Flame and Tyler, The Creator ratchet up the intensity. One of the failed pairings though is “Same Ol Story,” which passes by without a notable performance from any of the four features.

Themes present on “My Audemars” and “Real Niggas In The Building” will likely never disappear as a perpetual posse cut, and for that reason Quality Street Music is unable to transcend beyond its own execution. On the former track, Gucci Mane and Birdman lazily approach the topic of stuntin’ while the latter finds Travis Porter and Kirko Bangz unceremoniously steering into cringe-worthy territory, though that’s nothing new for them. The only track with a single featured artist, “Monique’s Room” feels out of place as the topic of love lost ends with mixed results (“I was the man who planned to cuff it up / But you had dicks on the ceiling, you fucked it up”).

For the most part, Quality Street Music lives up to its name, with DJ Drama furthering his prominence as a tastemaker in Hip Hop. His involvement in the actual song-making process may be limited, but his ear for the finished product shouldn’t be understated.