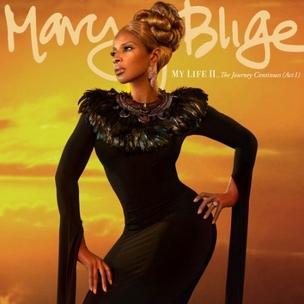 “If you look through my life, you see what I’ve seen.”  The trademark line and Roy Ayers’ “Everybody Loves the Sunshine” sample are forever synonymous with Mary J. Blige’s 1994 My Life album. Back then, a young Mary—rocking baggy jeans, Timbs, and a pained heart—connected with a fan base that crowned her the “Queen of Hip Hop Soul.” Almost 20 years after the original’s release, the Queen offers the follow up, My Life II… The Journey Continues (Act 1). And although she’s living her life in the sunshine these days, her sound is vintage Mary, as the Lady still sings the blues like no other.

Much of My Life II’s appeal comes from Mary’s reunion with My Life producer P. Diddy. The two prove that some partnerships just work, as they succeeded in creating a ‘90s Hip Hop feel that lasts throughout the entire project. As soon as Nas spits on the Wu-Tang Clan-sampled opener “Feel Inside,”

it’s hard to stop the instant head nod. The ‘90s vibe continues with “Midnight,” which finds Mary rhyming: “Homegirls love me and we be ridin’ Phantoms. Mad chicks hate me ‘cause I be writin’ anthems.” Busta Rhymes keeps her rocking on the Danja-produced “Next Level.” The track has an irresistible old school roller-skating feel, and sounds like “You Bring Me Joy” 2.0. Maintaining that soul school vibe, she covers her idol Chaka Khan’s “Ain’t Nobody.” Just like her rendition of Ms. Khan’s “Sweet Thing,” the remake stands strong alongside the original, while Darkchild’s bag of electronica tricks and studio pyro provides a modern twist.

Of course, no Mary album is complete without songs about heartbreak, although there’s more power than pain to them this time around. She waves her white flag on the Danja-produced “No Condition,” but she’s confident to let go.  Drake, who spent most of Take Care lamenting on failed relationships, joins her on her current single, “Mr. Wrong.” Rick Ross tops off the Sunday morning in a Cadillac vibe on “Why,”

and hails her the “Queen of our time,” as she brings the blues to another “feels so bad but it hurts so good” song. The empowered Mary returns on “Love a Woman,”

a clash of the Titans duet with fellow diva Beyoncé. The two speak truth over an Aaron Hall-esque track: “She doesn’t want makeup sex, she wants your respect.”

Mary leaves the most emotional songs for last. The brilliantly acoustic “Need Someone” is an album standout, simply because her vocal restraint is so unexpected. Nothing sums up Mary’s journey like the album’s final cut, “The Living Proof.” It sounds like a letter the My Life II Mary penned to My Life Mary: “So glad the worst is over, because it almost took me out. I can start flying now. My best days are right in front of me.”

My Life II… The Journey Continues (Part 1) is one of Mary’s most memorable albums. It’s clear that her journey has made her a stronger woman. Thankfully, her evolution hasn’t diluted her music’s honesty in the slightest.