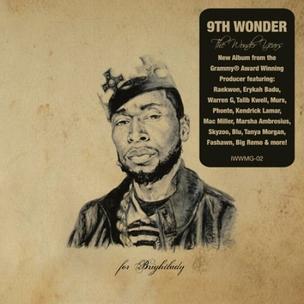 It’s a bit ironic to hear 9th Wonder distance himself from the burden of describing his own legacy in the opening monologue of his third official solo album, The Wonder Years. “I don’t think we define our own legacy,” he states plainly. “When you leave the game or you leave this Earth, people will decide the legacy for you.”

The Grammy winning producer sounds earnest, unabashedly humble almost. Then his quintessential snare hops in on “Make It Big” (featuring Khrysis) and that beautifully chopped soul sample bounces perfectly all over the place. Then on the opening bar, a rapping “Ninth Wondra” shares how he really feels: “Mattic now one of the best / Who wanna test?” before detailing seemingly every step along his rise to acclaim – 6th grade, Jay-Z’s “Threats,” his work with Ludacris and Destiny’s Child. It’s more than a great song; it’s a statement.

“They say that boy’s back / Nigga this is blackboard rap / You go and chalk it up to a loss,” raps Phonte on “Band Practice,”

(also featuring Median) seamlessly reuniting with his Little Brother producer, sounding as if they never disbanded. “I know you’re probably used to dudes who lie a lot / Take you to the mall, trick some doe, they buy a lot / Saying they taking you to a higher spot / But steady be getting they browse on like Chrome or Firefox,” Tay raps nine tracks later on “One Night,”

a groovy, two step ready jam loaded with crashing snares and subtle horns. 9th Wonder’s production has always espoused the best of boom-bap rap. But jazzed out extended breaks like the one on the Terrace Martin and Talib Kweli assisted “Never Stop Loving You”

or “Peanut Butter & Jelly” with Marsha Ambrosius or the sultry, uplifting “20 Feet Tall” (featuring Rhapsody and Erykah Badu) live in a space much broader than Hip Hop. It’s impressive, even as a background listen.

Skyzoo, Fashawn and King Mez all come rhyme tight on “Hearing The Melody.” Raekwon drops a truly inspired verse on “No Pretending”

and Mela Machinko’s soulful vocals on “Now I’m Being Cool” are enough to hope a 9th produced solo album is on the horizon. From mic to plug, The Wonder Years flows consistently lovely, even with a sporadic score of singers and emcees from across the musical divide stopping by to show skills.

9th Wonder makes a solid point in that opening monologue: defining his legacy isn’t his responsibility. And the legacy of his career and this album will undoubtably be hashed out at the pleasure of fans and rap critics. At an hour in length, The Wonder Years is long, but doesn’t feel like it. A handful of filler tracks like “That’s Love”

If there was ever a shred of incredulity concerning the stature of 9th’s legacy, even by 9th himself, The Wonder Years serves as a seismic rebuttal. This is a Hip Hop album, complete with the wondrous elements consistent with a broader musical appreciation. And it just might be 9th Wonder’s best yet.