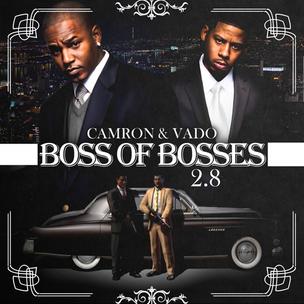 Cam’ron and his Diplomat goon squad will always have consistencies, such as their tried-and-true recipes for coke cooking and Killa Cam’s often giggle-inducing, lifestyle-flaunting bars. What they lack, they make up for in entertainment value. “2.8” lives up to this, yet suffers from various other inconsistencies, the most predominant being the lack of DJ Drama. A Drama-less “Boss Of All Bosses” results in a mixtape which, though dubbed official by Mr. Giles himself, feels more like a cheap tape they would grab out of a backpack and give as a free gift along with a powder purchase. The sound quality is lacking, the beats aren’t bad, but not jaw-dropping either, and the best songs on the project are those fans have already heard (“Warning” remix

What really sets “2.8” back, though, is the overwhelming presence of the second string emcees and singers that affiliate with Cam’ron and Vado. Something like a scene out of an NCAA tournament when a team comes to terms with the fact they’re about to lose the championship game and their coach lets the Freshmen C-List ballers onto the court for ten seconds each so they can say they actually played in the finals, the tracklist on “2.8” reads like the Dips let their rookies (or for lack of a better term, “weedcarriers”) have their ten seconds of fame before Cam and Vado come back on “3.0” with their A-List rap friends and Drama in tow to rap circles around everybody. Female emcee Jaz racks up a total of seven features on the 21-track compilation, and though she has a good grasp on how to relay her voice on a mic, her bars remain mediocre. To place her alongside Vado is nearly insulting, as he switches between double-time to slowed-down bars effortlessly, expressing his brick-influenced lavish lifestyle eloquently enough that a rewind button might get a workout.

Despite its setbacks, “2.8” is still worth a listen for fans of Harlem coke rap. Entertainment value is top notch on the project, with Cam’s lyrical antics being a good counterbalance to Vado’s impressive flows, and skits such as the “White Boy J Murder Skit” proving that if rapping stops paying the Dips’ bills, stand up comedy might be the way to go. As bootleg-sounding as “2.8” is, Cam still manages to drop lines true to his signature style, such as, “but I move more drugs than CVS, got the bezel done, never rode the short bus but knew I was a special one,” as heard on “Star.” And though Cam’ron couldn’t turn White Boy J into a murderer, he and Vado did manage to get 0.3 steps closer to “3.0.” And when DJ Drama returns from his travels abroad “getting fucking money” and brings this mixtape series back to its polished prime, “3.0” should be as hot as the stoves upon which Cam and Vado (allegedly) cook their coke.

Listen to Cam’ron & Vado Boss Of All Bosses 2.8