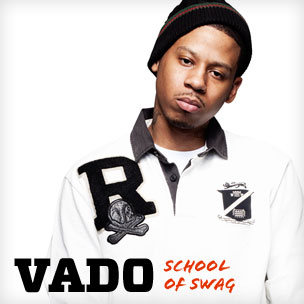 When Vado’s name first popped up out of nowhere on Cam’ron’s 2009 DJ Drama-hosted mixtape Boss of All Bosses 2.5

, it was hard not assume that we wouldn’t be hearing from much of him in the future. That’s not call Vado’s talent into question; it’s just that when it comes to co-signing new artists, Cam’ron hasn’t exactly had the best track record. Although J.R. Writer, Hell Rell and 40 Cal are talented rappers that never really got the proper shine that they deserved (Writer’s History in the Making still goes hard), the same really can’t be said about Un Kasa. Or Jha-Jha. Or S.A.S. Or Penz. Or Katt Williams. To really convince listeners that he wasn’t just another hack that had somehow hustled his way into Cam’ron’s inner circle, Vado had to make like Shyheim with Big Daddy Kane and show and prove that he could hang tight with Flea. Fortunately for us, however, Vado is much more than bud-holding sidekick. Within the brisk span of two years, Vado established himself as a graduate of the Harlem school of Hip Hop.

Despite Vado’s relatively recent rise to fame, the Harlem-bred U.N./Diplomats member and DXnext alum has made quite an impression on the Hip Hop scene. Between his outstanding work alongside his mentor Cam’ron on their Boss of All Bosses series and aptly trading verses with a host of seasoned New York veterans like Jadakiss, Fat Joe, N.O.R.E. and Fabolous, Vado’s accomplished a lot more than many of his musical peers in a fraction of the time. And coming off of inking a record deal with Hip Hop powerhouse Interscope in March, he’s become one of the few members of the new generation of emcees that hails from New Yitty to actually sign to a major label. At the same time, his debut retail mixtape Slime Flu  found Vado stepping out of the side-kick role into his own place in the rap game as a versatile lyricist equally capable of firing up the club as he is the streets. He’s proved his not just another fly-by-night co-star; rather, he’s a bona fide lyricist grounded in art of matching catchy-as-hell club bangers and lyrically dexterous street anthems.

It shouldn’t comes as much of a surprise that Vado follows directly in line with his mentor Killa Cam and Harlem Rap titan Big L. Armed with an arsenal of outrageous catch phrases and off-the-wall slang, Vado is thoroughly schooled in the lyrical ways of Lamont Coleman, Cameron Giles and Uptown’s other emcees. His performance on Slime Flu’s opening track “Council Music” finds him ripping through a litany of tongue-twister multi-syllabic lines, spitting, “The nicest you can find be Slime, truly / Top of the line jewelry / Shades on, Pelle’s worn, but mine’s Louis / You write rhymes, my lines define movies / Never ate off the books so how you gon’ to try and school me?” He even adopted Big L’s own stylistic flair from the song “Ebonics,” putting L’s slang lexicon into a modern context with lines like, “A hot car’s a toy, A cop car’s the boys / We call Nike Shox the boings, loose change is coins / Gunplay, you shot things with noise / Say you wearing bang-bang, means your chain is moist / You like the way I deliver it / I talk for Harlem, I will never stop kicking it.”

Over the course of Boss of All Bosses’ 23 tracks, the Harlem rookie stunned listeners with top-notch verbal assaults that blended his street-tested ethos with battle-ready punch line appeal. Tracks like “Ric Flair” and “Pop Off” found him doling out witty, rhythmically complex bars like, “I love beef, usually have it with lo mein / So trained, got them waiting in line like Soul Train / Rolls Royce, platinum-red, watch the boy floss/I get head chasing tail like a coin toss.” At the same time, Vado proved he wasn’t just another emcee prone to wholly interchangeable punch lines. His lone solo track on the mixtape “Fed Story” captures the gritty reality of Harlem street life through a sober lens, rife with vividly crafted lines like, “No callers, no orders / I’m like a fish on land with no water / As I stand on both corners / ‘Bout a dollar, trying to expand like four quarters / No losses, no forfeits / Just a chair in the trap, no office / Gunshots are so often / Niggas’ll leave you in the dirt with no coffin.”

While Vado’s performance on Boss of All Bosses gave him a strong foothold within the industry, it wasn’t until the release of the mixtape’s two sequels that the Harlem upstart really started to turn listeners’ heads. Vado and Cam smashed sound systems across the country with singles like “Stop It 5”

and the Kid Cudi-assisted “Y’all Killin’ Me”

. While these tracks worked partly due to Cam’ron’s reinvigorated craftsmanship and producers AraabMuzik and the Alchemist’s talent with the MPC, Vado showed that he had grown immensely as a lyricist from his first outing. On “Stop it 5,” Vado displayed an impressive cohesion of his colorful slang and panache of hysterical punch lines with bars like, “You peel onions, let’s go pie for pie / I hit ‘em like Dolph Lundgren – if he dies, he dies,” while his energetic opening verse on “Speakin’ in Tungs” upped the ante on how New York emcees had to approach club hits.

But booming club bangers and gruff street songs aren’t the only tricks Mavado’s got up his sleeve. He can move seamlessly between the types of material that established him as game changer and subtler, more lyrically driven fare akin to Cam’ron’s “Come Home with Me” and “Down and Out.” Songs like Gunz N Butta’s “Be With Me” and the previously leaked “On His Own”

find the Harlem emcee in an entirely different light than that provided by the Boss of All Bosses series. On the former track, he steps into a self-reflective state looking back on the drug trade that landed him behind bars for eight months, saying, “The day that you came back, I couldn’t believe it / Was hard as a rock, but I wouldn’t mistreat it / You told me to stop, but I couldn’t achieve it / I’m back on the block from morning to evening.” Like his mentor, Vado can shift between being the typical swagged-out braggart of a rapper and a dead-serious emcee that puts his life in his lines.

In just two years, Vado’s accomplished what takes the majority of burgeoning emcees half a decade or more to accomplish. He’s transformed from a sideline player into a lyrical heavyweight able to duke it out on the mic with any veteran New York rapper. At the same time, he’s shown real growth as a lyricist with each new project. Like Big L and Cam’ron before him, Vado’s a wildcard of emcee that perfectly encapsulates the swagger and lyrical gravitas of the golden era’s finest. Who needs freshman recognition when you’re on the fast track to graduating from the same lyrical school that birthed Uptown’s finest?

Sean Ryon is HipHopDX’s Editorial Assistant. A former intern, he has been writing about music professionally since 2009. He presently lives in New York City.