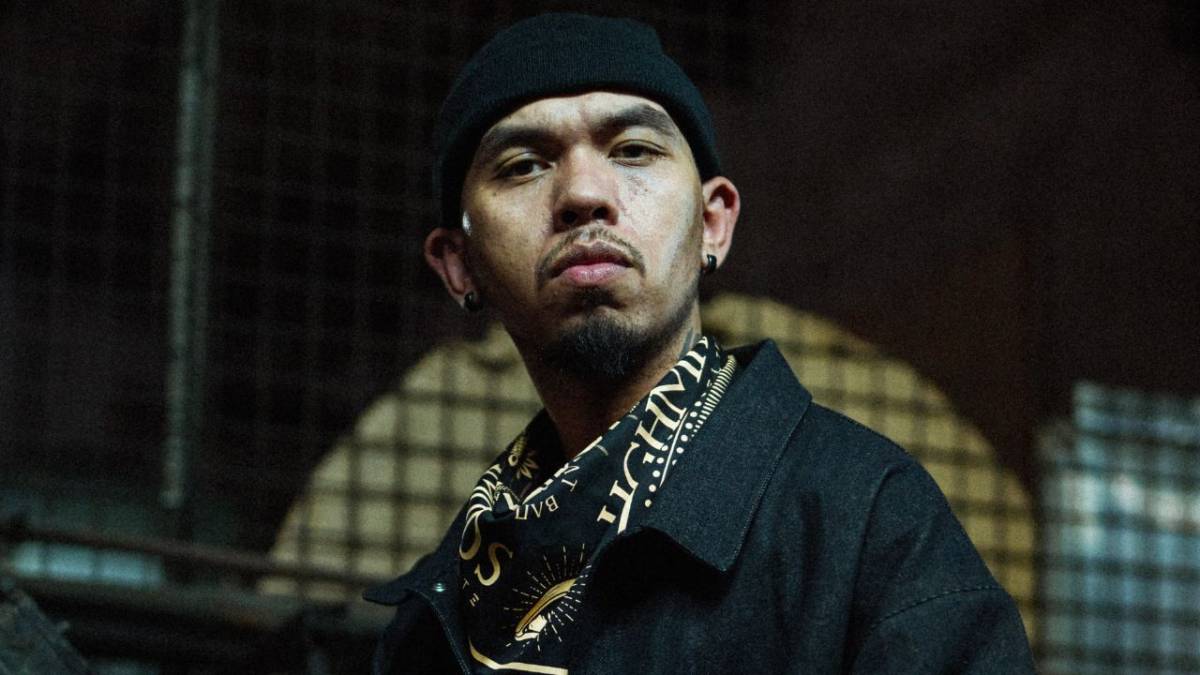 Loonie is a household name in the Philippines’ hip hop scene. Not only is he one of the most respected battle rappers in the industry—serving as an inspiration for fellow “The Regionals: Philippines” participants Arkho and Mhot—but he has a film credit, as well as multiple high-profile features and ventures  under his belt.

However, before the fame and accolades, the rapper’s gateway into the genre was Naughty By Nature. He rattles off a list of other artists who inspired him as he traveled down the hip hop rabbit hole: 2Pac, Bone Thugs-N-Harmony, Jay-Z, Nas, Eminem, and more. This led him to discover what would eventually become his crowning glory: the battle rap circuit.

“That’s what I tried to inject here sa culture natin sa Pilipinas (our culture here in the Philippines), kasi everyone was into music at that time. And me, I felt na I wanted to make my mark in the Philippines…blaze my own trail using battle rap.” And blaze his trail he did.

What shapes Loonie’s music is his experiences growing up. The rapper owes his heritage to three different islands in the Philippines: Leyte, Cebu, and Metro Manila. Despite being situated in the Philippines, these three regions have a diverse set of cultures, languages, and traditions.

“I think it’s an advantage, especially to an artist, to be multicultural…to be able to connect to different people. Yung mga conyo (Filipinos who mix their native language with English), they can relate to you, [as well as] people on the streets. Kahit yung dialect, hindi nagiging sagabal sa pag-connect mo, sa pag-transcend ng art mo sa kanila.” (Dialects don’t become a hindrance to your ability to connect [to them], or the ability of your art to transcend.)

This multicultural upbringing is even referenced in his lyrics. He shares, “‘Pag nasa Cebu ako, tingin [nila] sa’kin: Manileño. Pero ‘pag nasa Manila ako, tingin sa’kin: Bisaya. They can’t put you in a box.” (When I’m in Cebu, they see me as a Manileño. But when I’m in Manila, they see me as Bisaya.) He goes on to share how people see him as a mystery, because they don’t know “what your whole package is” when you’re brought up in different cultures.

Since then, his journey as a veteran rapper has been long and storied. “I think naranasan ko na yung dinadanas ng typical na rapper” (I think I’ve experienced everything that a typical rapper experiences), he says. He mentions his divorce, going to jail, overdose, creating enemies, diss tracks, and everything else in between. Loonie goes on to detail how it’s an interesting, yet completely unintentional, parallel to all the artists he’s looked up to before and what they went through as well.

“It’s part of the struggle of being a rapper–being stereotyped, like ‘Oh, you’re wearing baggy clothes, you have tattoos, you’re probably up to no good’ […] For me, local hip hop has come a long way. Everyone just wants to rap. Dati (Before), they don’t even respect you…they look at you as a clown when you rap. But now, it’s crazy…it’s branched out to different subgenres. Sa Pilipinas din, maliban sa music, sa battle rap (In the Philippines as well, aside from music, in battle rap), we’re the most viewed out of all the countries in the world…and I’m proud to represent that.”

Leading up to The Regionals: Philippines release this September 2, Loonie shares how it’s been such a blessing for him, especially as we settle into the pandemic. “[Because of the pandemic], everyone thought na wala nang ganito…and now to see up-and-coming artists like JRLDM, Mhot, the legendary Arkho, and Protege, a legend in the battle rap scene…and [finally] being able to share the stage with them. […] You know, 2022 marks two decades of me doing rap professionally in the Philippines. So for me to still be able to hang out with the young ones, the young bloods–it’s a blessing.”

While rapping on an !llmind beat put some pressure on him–”You don’t want to do just your average raps here […] you have to go all in,”–he wanted to add his own emotion and tone to the cypher, just like his fellow participants did.

As he looks towards the future, he’s hoping the cypher inspires the next generation of Filipino rappers. He dubs it as a certified “classic track” (his words, not ours) that encapsulates local Filipino hip hop. As a final note, he talks about the beauty of young rappers working together with the people around them to grow together in their music.

Pre-save The Regionals: Philippines here and mark your calendars for September 2 at 7 PM, Manila time for the worldwide premiere of the official music video below: