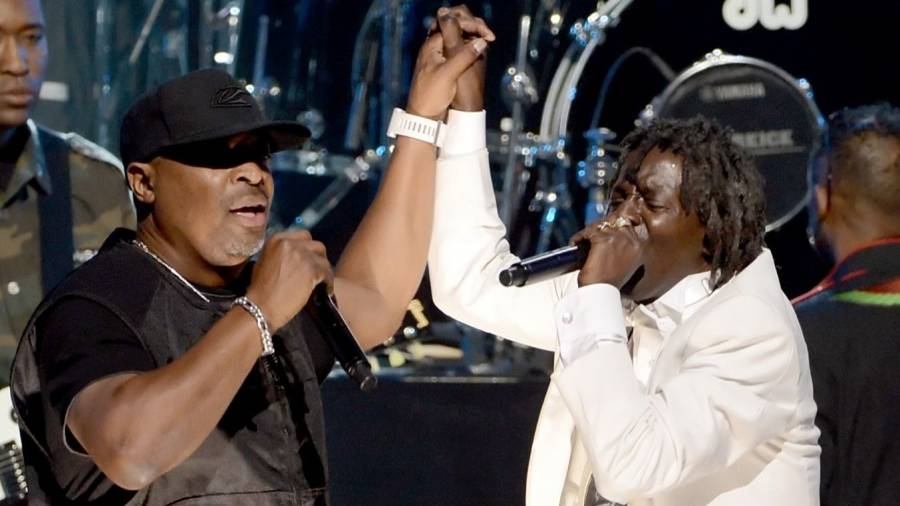 In the wake of the 2020 police killing of George Floyd, rapper Lil Baby released a powerful Black Lives Matter anthem called “The Bigger Picture,” YG disrupted Los Angeles protests with a video shoot for “FTP (Fuck The Police)” and Nas unleashed the King’s Disease single “Ultra Black,” all songs that spoke to the socio-political climate in the United States.

As protests continued to erupt in every major city from Los Angeles to New York City, Public Enemy was tapped to open the 2020 BET Awards in June with an updated version of the 1990 Fear Of A Black Planet classic “Fight The Power.” This time, Chuck D, Flavor Flav and DJ Lord were assisted by Nas, Black Thought, Rapsody, Questlove, YG and Enemy Radio’s Jahi.

On Friday (September 25), Public Enemy, Paris, Arrested Development and Nappy Roots were among the many “classic” Hip Hop artists who dropped a new album, begging the question — does 2020 mark the beginning of a return to more conscious rap? Furthermore, are Hip Hop fans craving more content-driven music?

Admittedly, there have been some significant wins for the conscious rap “sub-genre” in recent years. Kendrick Lamar’s 2017 masterpiece DAMN. won a Pulitzer Prize and was certified triple platinum in 2018. That same year, J. Cole’s KOD tackled drug addiction, mental health and greed and still debuted at No. 1 on the Billboard 200 chart, selling almost 400,000 units in its opening week. Even Run The Jewels’ RTJ4, which dives deep into politics and the overt racism prevalent in the U.S., hit the Billboard Top 10, a first for the duo.

But, the mainstream radio waves primarily pump out vacuous songs that typically center on partying, sex or financial status in an effort to appeal to a younger crowd. Meanwhile, Public Enemy has always stood for something — whether they were fighting against systemic racism or Arizona’s refusal to recognize Martin Luther King Jr.’s birthday as a national holiday.

Public Enemy’s latest album What Will You Do When The Grid Goes Down? again explores politically-charged themes as illustrated on songs such as “State Of The Union (STFU)” and the “Fight The Power (2020 Remix).”

Speaking to HipHopDX, Chuck D explains he doesn’t think there’s necessarily a renewed interest in content-driven Hip Hop, he’s confident that hunger has always been growling all along.

“I think the appetite for it has always been there from the fans, but I think the thing that’s misunderstood is the actual bandwidth of Hip Hop’s fanbase, which can go from age five to 60 and even beyond,” Chuck tells DX. “If we’re only going to ask people aged five to 15 what they’re thinking about or what they want to hear, these kinds of artists aren’t their thing yet. It’s an acquired taste.

“There’s a whole demographic that’s grown up with us who might feel a little bit of comfort in knowing there’s still another voice — or in this case, four — that’s out there that can culturally connect with them. I am honored to be connected to and affiliated with these groups this way. My involvement with Paris and Arrested Development’s Speech is documented, and I’ve played Nappy Roots’ music on RAPstation, past, present and future with equal aplomb.”

Paris see things a little differently. The Bay Area native, who was once a member of the Nation of Islam, faced controversy early on for his radical content. In fact, his inaugural video “Break The Grip of Shame” was banned from MTV.

Images of Malcolm X, the Ku Klux Klan burning crosses and Black Panther rallies proved to be too much for the network to handle in 1990.

“Listeners have wanted more meat on Hip Hop’s bone for a while now,” he tells DX. “The sad fact is that many have been socialized to only accept Hip Hop’s more materialistic, party-driven offerings over the years due to the genre’s corporate-controlled direction.”

Paris continues, “But Trump’s ascension and the corresponding rise in racism that he’s emboldened have made Hip Hop’s narrow focus fail to represent why it was created in the first place — to allow voices of the voiceless to be heard and to go against the grain of the status quo.

“Like most of the general population, listeners are mad and increasingly want material that reflects the reality of the times we’re living in. So those of us with a socially-aware focus continue to rise to the occasion.”

Meanwhile, Speech of Arrested Development, who just put out the new album Don’t Fight Your Demons, has been screaming for racial equality since the Grammy Award-winning Afrocentric Hip Hop group dropped their seminal studio effort 3 Years, 5 Months and 2 Days in the Life Of... in 1992.

At the time, the album was almost like an antidote to the violent, gritty themes found in West Coast gangsta rap. Where groups like N.W.A and Compton’s Most Wanted detailed the grim reality of gang life, Arrested Development rapped about peace, love and positivity. The project peaked at No. 7 on the Billboard 200 and No. 3 on the R&B/Hip Hop chart, and was certified 4x-platinum by the RIAA in 1995.

As Speech moves ahead with his mission of unity, he’s hopeful a revolution is coming but agrees with Paris that the corporate higher ups are working the system like puppeteers.

“Hip Hop fans young and old, professionals and laymen are feeling their music is being force to them by the powers that be,” he says. “I volunteer at grade schools, middle schools, high schools and universities. With literally no exceptions, Black people of all ages know they are being force fed anti-Black, self-hate propaganda. They many not know the details of how it all works, but they know it’s happening. I know this ’cause they tell me.

Speech continues, “I also go to mainstream radio stations and program directors speak privately to me about their inability to direct their own programming because their corporate heads determine the song playlists and corporate branding. The DJs at radio tell me they have had to check their actual music choices at the door if they want their job security, benefits and longevity. It’s become a game and to get the bag, you know to play along.

“And although a variety of music is available on streaming services, discovery is still a major obstacle for most artists, especially the conscious ones. Platform means a raised level surface on which people or things can stand. Well, most platform algorithms are prejudiced against highlighting content that doesn’t square up with their brand or mission statement. Therefore, fans are way more likely to see the new Cardi B album is out than an Arrested Development one.”

On the other hand, Nappy Roots MC Fish Scales believes the current socio-political climate in the United States is creating a demand for more thought provoking lyrics — as it should.

To shed light on important issues, the Kentucky-bred group is using the platform they established with their platinum-selling debut album Watermelon, Chicken & Gritz, which arrived in 2002. At the time, their singles “Awnaw,” “Po’ Folks” and “Headz Up” sent their first studio effort soaring to No. 3 on the Billboard R&B/Hip Hop chart and put “country fried” rap on the map.

“I do think that with all of the attention that has finally been placed on police brutality and black men dying at the hands of police, rappers have been feeling a responsibility to be socially conscious,” he explains. “As we recorded 40RTY, we definitely felt a need to be more serious and speak on these issues as oppose to more party music.

“I feel that people need to know that their favorite artist is aware of what’s going on out here. Personally, I’m looking forward to hearing from Public Enemy and Arrested Development. They definitely helped pave the way for conscious Hip Hop.”

September 25 also saw a slew of other releases in the same vein. A special Record Store Day remix featuring the late Sean Price, Small Professor and Masta Ace called “Latoya Jackson” and Uncommon Nasa and Gajah’s White Horse project are among the releases that fall under the “conscious rap” umbrella.

But that’s not all. ’90s Hip Hop greats Brand Nubian still has a member imparting the Islam-influenced teachings of The Nation of Gods and Earths to their fans (and no, it’s not Lord Jamar or Grand Puba). Rather, Sadat X has teamed up with Purple City rapper Agallah for a collaborative album titled The Gods Have Arrived, a healthy 11-track balance of bravado, boom-bap and brilliance.

This year, Record Store Day lands on Saturday (September 26) and continues to “celebrate the culture of the independently owned record store.” Find the “Latoya Jackson” remix here and check out The Gods Have Arrived and White Horse projects below.