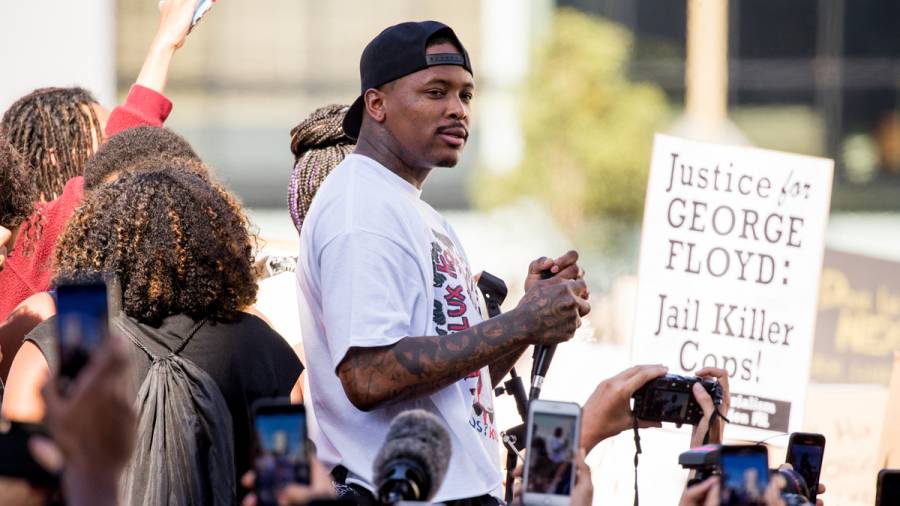 In an interview with The Morning Hustle radio show on Wednesday (July 29), the Compton rapper recalled his two daughters being home when L.A. County Sheriff’s deputies arrived with a search warrant related to a robbery case.

“Around the Grammys, I went to jail,” he explained. “The police came, raided my house – like my house, house with me and my family and my kids. They come through like four in the morning. We asleep, the helicopter had come around and all that. So boom, I bounced up like, ‘What’s going on?’ Boom! They bang the door in trying to get in the door, so I go downstairs, I open the door – boom! They draw down on me. That’s normal, but my kids at the time were 4 years old and 6 years old. They upstairs in the room with their mama.”

He went on to explain how cops ran upstairs after he informed them his family was there.

“They go up in the room and they got the big AKs all in my little kids’ face like, ‘Don’t move!'” YG recalled. “I’m like bro, what the fuck is y’all doing? Y’all got me fucked up! They doing this to my little kids! And these are little girls!”

Despite the violation, YG has accepted his gang affiliations and previous lifestyle contribute to the harassment.

“I been through a lot of other stuff with the police but I’m from the streets though, you feel me?” he said. “So it’s like I got a target on my back already from that and I know that, so it ain’t really nothing to talk about. Because it’s like when you’re from a certain area, the police gon’ fuck with you.”

#YG goes into detail about the traumatizing raid when police came into his house guns drawn on him & his family earlier in the year.

If you missed it this morning, check out the full convo w/ @headkrack @billysorrells @StarringLoreL & @YG

Not many further details were revealed following the January arrest, other than the “Big Bank” rapper’s bail being set at $250,000. At the time, he denied being home during the raid in a statement on Twitter.

“I was nowhere near the scene of this incident, I was in Hollywood recording in the studio all day,” he said. “I was there until after midnight on the 4th of July and didn’t learn of these events until after they happened!”

YG’s disdain for police has long been documented in his music, most recently with his protest song titled “FTP (Fuck The Police)”. Revisit the video below, shot during the Black Lives Matter protest YG co-organized in Los Angeles in June.