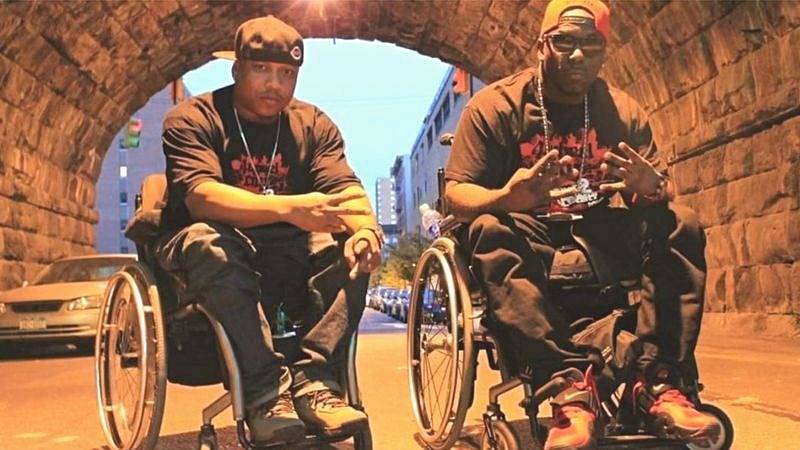 Namel Norris — also known as Tap Waterz from the Hip Hop duo 4 Wheel City — was only 17 years old when he was accidentally shot in the neck, paralyzing him from the waist down. It was January 16, 1999 and his family was getting ready to celebrate his sister’s Sweet 16 at their Bronx apartment — it was the day his entire life changed.

“My cousin was playing with a gun,” he tells HipHopDX. “We was young, involved in the streets and everything. We had a gun we were sharing and lent it out to another friend of ours. When he brought the gun back, he asked about how to put the safety on and we did that. But my cousin started being stupid and playing around with it. The gun went off and shot me in my lower neck and left me paralyzed.”

“Everybody was going crazy,” he continues. “At the time this happened, the birthday party was starting in the house and we about to have fun and celebrate the party. But before we was about to celebrate the party, me and my cousin, another cousin and my homie was going to go smoke some weed and come back in the house during the party. But before we did that, we went to put away the gun.

Norris adds, “So it was a big thing to behold when it happened. When I think back, I always feel like that was part of the message I’m supposed to bring forth. I feel like it happened there for people to bear witness and to watch God’s work and the miracle about to happen from that moment. For me, it’s hard for me to think about. I don’t know too many people that get shot in front of their family and all their friends.”

As Norris adjusted to life in a wheelchair, he dove into music and ultimately found inspiration in Stevie Wonder. He was captivated by Wonder’s perseverance despite being blind and mustered the courage to pursue a music career of his own. Earlier this year, Norris appeared in the Apple TV series Dear… in which he read a letter he wrote to Wonder that explained what a profound effect the iconic singer had on him.

Now an MC himself, Norris and his rhyming partner Ricardo “Rick Fire” Velasquez — who was also paralyzed after being struck by a stray bullet — are advocates for people with disabilities.

Their journey has taken them from the streets of the Bronx to the U.S. Capitol Visitors Center in Washington D.C. where they debuted their single “Mainstream” for an event hosted by the National Disability Institute (NDI). They collaborated on the “Welcome To Reality G-Mix” with Snoop Dogg and are active in the Black Lives Matter movement. But overall, 4 Wheel City is focused on making life for those with disabilities easier.

“I started going through these emotions of not being able to get inside of stores and stuff like that,” he explains. “Then I’m like, ‘Damn. Nobody’s going to rap about this.’ And that’s why the Stevie Wonder thing was really genuine because I really did think about him and how his music always resonated with people and how people loved him despite his disability.

“That gave me inspiration to be like, ‘Well, I make good music. I have a chance.’ From there, I was able to start coming up with different ideas and started to realize I was in a situation where, ‘Wait, nobody’s in a wheelchair doing what I’m trying to do.'”

Before Fred The Godson died in April from COVID-19 complications, 4 Wheel City had a chance to collaborate on a song called “We Ain’t Playin'” after originally connecting backstage at a show in 2018. Needless to say, Fred’s sudden death was a shock.

“It was really sad to me,” Norris says. “I felt like him and I really connected. I’ve met plenty of artists, but I feel like he was the first one where it was genuine. We spoke about doing a song and he actually called me to follow up. I’m usually the one always calling to follow up. Even when I met him, he remembered the show we did together, which ironically was for a good cause. It was called, Drop The Gun, Pick Up The Mic.”

“We Ain’t Playin'” comes from 4 Wheel City’s latest release Quarantine Music: Raw & Uncut, which was released in May. Norris is happy people will finally get to see the visual — exclusively premiered by DX — for the song, even though Fred is no longer here.

“When I heard he actually passed away, I was taken aback because I had this song,” he says. “I was like, ‘Damn, I can never speak to this man about this song again, show him the video or call him and tell him about the album.’ But to see how many people show him respect from the industry … great, great rappers really respect his craft. I feel more honored that I actually got to work with him.”

The video inspired by the film Body Cam starring Mary J Blige, which revolves around police brutality. A group of officers killed a unarmed black youth who happened to also be deaf/disabled. His spirit returns to take vengeance on the officers and protect his mother.

“Fred is like that spirit coming back to support the Black Lives Matter movement in the video and watching over the people and taking action like the spirit in the movie,” Norris explains. “That’s the gist of it, plus some recent headlines and incidents like the guy getting pushed out his wheelchair and beat up by the police recently.”

“We Ain’t Playin'” is number two in a series of three videos. The last visual “Stupid With the Gun,” which should arrive in August, is hosted by Jadakiss and tackles gun violence.

As the Americans With Disabilities Act (ADA) turns 30 on Saturday (July 26), Norris and Velasquez are firmly focused on fighting for equality while crafting a dope soundtrack for their own revolution. In terms of how Norris feels about guns today, it’s complicated. While he hopes he can inspire the youth to stay away from them, he also understands why they’re so enthralling to some people — he used to be one of them.

“I put the bullet in the gun that shot me,” he says. “The thing about guns and gun violence is I understand both sides of it — literally. The same gun that shot me, I was fascinated with. I needed to have a gun and the gun would make me feel like a powerful person. But on the other side, I understand the consequences. I don’t want to scorn anybody, I just want them to know the consequences of guns. That’s part of our message.”

Incredibly, Norris sees the silver lining to his situation.

“I think it actually put my life in alignment with my inner light,” he says. “When I look back on my life, I thank God I’ve been given a chance to be at a place where I can look back after going through so many things. I’ve noticed the qualities about me that made me persevere are the things I’ve had all along.”

Listen to Quarantine Music: Raw & Uncut below and read up on the ADA here.