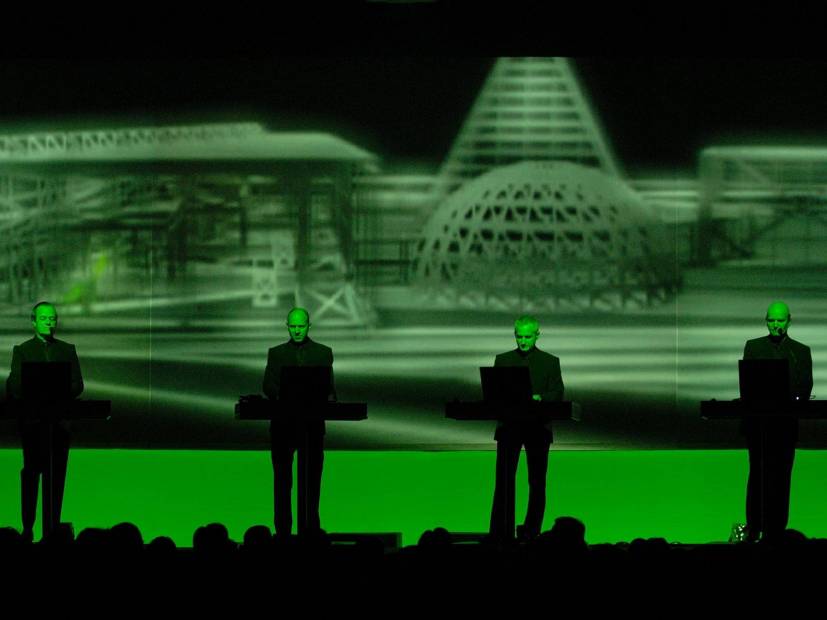 Kraftwerk co-founder Florian Schneider lost his battle with cancer last week at the age of 73. According to The Guardian, the news was confirmed by Sony Berlin and one of Schneider’s musical collaborators. A private burial was held for close friends and family.

The pioneering German band — formed by Schneider and Ralf Hütter in 1970 — is credited with ushering in the electronic music genre with its self-titled debut album and subsequent masterpiece, 1977’s Trans-Europe Express.

It was the title track from that groundbreaking album that would lay the blueprint for Afrika Bambaataa’s iconic hit “Planet Rock” and Hip Hop would never be the same.

Naturally, countless Hip Hop artists have sampled songs from the innovative duo. Below are 10 Hip Hop songs that wouldn’t exist without Kraftwerk.

Afrika Bambaataa drew from the title track of the aforementioned album Trans-Europe Express for “Planet Rock.” In a 2017 interview with Red Bull Academy, Bambaataa said he stumbled on their records in a small record store in the Village.

“I thought it was some weird shit,” he said. “Some funky mechanical crazy shit. And more and more as I kept listening to it, I said, ‘They some funky white guys. Where they from?’ Start reading all the … I always read labels yunno, want to see what it says on the back, who wrote what. I went digging more into their history so I got into Autobahn, and once I got into rock pool, they told me other things to check out, and I was checking Radioactivity.”

The Harlem Hip Hop group pulled from the title track of Kraftwerk’s 1978 album The Man-Machine. “Rockin It” famously appeared in the 1983 documentary Style Wars.

Before Sir Mix-A-Lot exploded into mainstream music with “Baby Got Back,” he produced the greatness that is Swass in 1988. For the track “Rippin,” he borrowed from Kraftwerk’s 1981 single “Numbers,” which came from the album Computer World.

Kool G Rap and DJ Polo reimagined Kraftwerk’s “Metal On Metal” cut from Trans-Europe Express for “Rhymes.” The track comes from the duo’s 1989 album Road To The Riches.

Hate it or love it, this song had fraternity parties all across America hyped in the ’90s. The song takes cues, once again, from the Kraftwerk single “Numbers” from the previously mentioned album Computer World. This particular version of “Whoomp (There It Is)” appeared on the Miami group’s remix compilation.

In 1995, DJ Shadow was experimenting with Kraftwerk’s 1981 album Computer World and wound up using “Numbers” for the song “What Does Your Soul Look Like (Part 4).” The song ended up on his breakthrough album, 1996’s Entroducing, a certifiable Hip Hop classic.

For this one, Dan The Automator, Kool Keith and DJ Q-Bert took inspiration from Kraftwerk’s 1978 single “The Robots” from the album The Man-Machine. “Blue Flowers” appeared on Dr. Octagon’s seminal album Dr. Octagonecologyst.

For The Neptunes Present…Clones compilation, Pharrell Williams and Chad Hugo reeled in Busta Rhymes for the song “Light Your Ass On Fire,” which samples Kraftwerk’s “Trans Europe Express.” The Clones project debuted at No. 1 on the Billboard 200 chart upon its 2003 release and has since been certified gold by the RIAA.

Timbo recruited some heavy hitters for “Bounce” in 2007, including his longtime collaborator Missy Elliott and the inimitable Dr. Dre. He used parts of the title track off Kraftwerk’s 1983 project Tour de France. “Bounce” was featured on 2007’s Step Up 2: The Street.

G-Unit sampled the 1977 Kraftwerk cut “The Hall of Mirrors” from Trans-Europe Express for “They Talked About Jesus,” which dropped in 2014. The song featured Tony Yayo, Lloyd Banks and Young Buck, long before 50 Cent became Buck’s merciless troll.