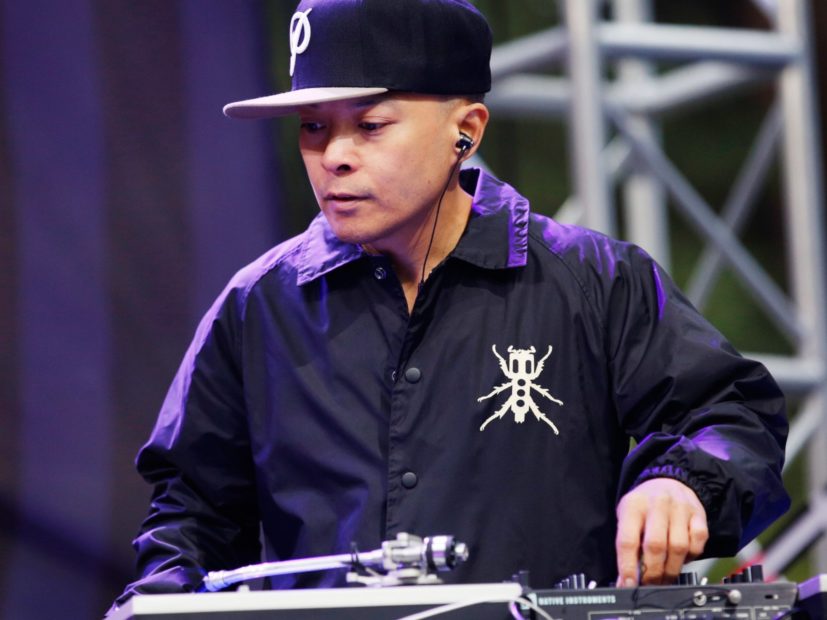 The first time DJ Qbert won a DMC US title in 1991, he did a backflip — despite not knowing actually how to do one. Needless to say, it didn’t work out too well for the seasoned turntablist.

“The feeling was unbelievable [when I won],” Q tells HipHopDX. “It didn’t hit me until like hours later. I did a backflip and I don’t even know how to do a backflip, so I hit my head. It was my first time doing a backflip. I mean, I could have killed myself, actually.

“I was just walking back to the hotel and there was some carpet there. Good thing there was carpet. I landed on my neck and everything. It was amazing. But I was so happy. I would’ve broke my neck and still laughed. Like, ‘Yeah, fuck.'”

Although Q stopped competing in 1995 (there was a rumor the DMC powers that be asked he and fellow Invisibl Skratch Pikl Mix Master Mike to stop so other DJs would have a chance), he continued judging battles. In fact, he and the Beastie Boys DJ were judges when Roc Raida won the DMC World title in 1995.

“If you watch the competition, me and Mike do a little showcase at the end and we were the judges,” he says. “That’s the year they told us, ‘You guys got to retire, don’t compete because people don’t want to enter.’ That’s just what they said. They could have been joking.

“Raida was a very good friend of ours. We already knew what to expect ’cause we kicked it. He was part of our brother crew from the East Coast [X-Ecutioners]. They were the crew we battled, but at the same time, they were our brother crew. That’s kind of funny.”

The 10-year anniversary of Roc Raida’s passing was on September 19. Looking back on their time together, Q recalls a particular 1996 showcase battle between the X-Ecutioners and Invisibl Skratch Piklz that called his ethics into question.

“It was the ITF’s [International Turntablist Federation] first competition and we battled them in this super hot club — you couldn’t even move in there,” he explains. “We were battling and everyone was sweating. There was a bucket with a bunch of water bottles next to me and Raida was sweating. He was on the other side and we’re competing against each other.

“I was thinking, ‘Should I give him some of this water right now? ‘Cause I really want him to lose. ‘Cause I want to whoop his ass in this battle. I want him to suffer. He’s over there suffering, right, sweating.’ And I said, ‘I can’t do that.’ So I handed him a bottle of water and said, ‘Yo Raida, here, you need some water.’ And he was like, ‘I love you, Q.’ Yeah, we were battling, so we’re going to fuck you up but at the same time, the moral side of me was like, ‘Yo, here’s some water.'”

Q later wondered if he made the right move.

“I was like really thinking about it,” he admits. “After I gave him the water, in the back of my head I was like, ‘Fuck, should I have given him that?’ Fifty-one percent of me was like, ‘You better just give it to him, be nice.’ The other 49 was like, ‘Hell no. Don’t give him that water.’

Raida died in 2009 following an accident during a Krav Maga sparring session. While in the hospital, he went into cardiac arrest and never recovered. It caught Q by surprise.

“He was in the hospital and I was like, ‘Oh, get well soon.’ I even made a ‘get well soon’ video for him,” he remembers. “And then later, I was like, ‘What the hell? He passed away?’ I was already into some spirituality stuff at that time so I was like, ‘Well he’s in heaven and we’re still here in hell.’ So he’s having a good time in heaven. It’s actually a good thing.”

For now, the Dr. Octagon scratch technician is focused on finishing his Wave Twisters Zero: The Origins album. It serves as the prequel to the 1998 original. He’s been releasing songs one track at a time on his website but plans to save the final few for the full album.

“It’s already the 20-year anniversary of Wave Twisters,” he says. “I have to finish The Origins by the end of this year, so it’s like I’m thinking October, November it’s going to be out. I’m trying to do 12 tracks. I’m at number eight right now. So it’s pretty cool — and they’re all free on Thudrumble.com right now. I’m doing the whole album by myself. The next one that I’m doing will be with a whole bunch of MCs and stuff.”

Q also reveals a new Invisibl Skratch Piklz album is on the horizon. It will mark the follow-up to 2016’s The 13th Floor.

“We have a new Invisibl Skratch Piklz album coming out after that, which we’re thinking might be all electro,” he says. “We’re thinking because we got Egyptian Lover on it and we’re like, ‘Let’s just go all electro for this one.’ It should be a pretty soon. I mean, you know after this album and then the the other one. It’s definitely going to be a 2020 thing.”