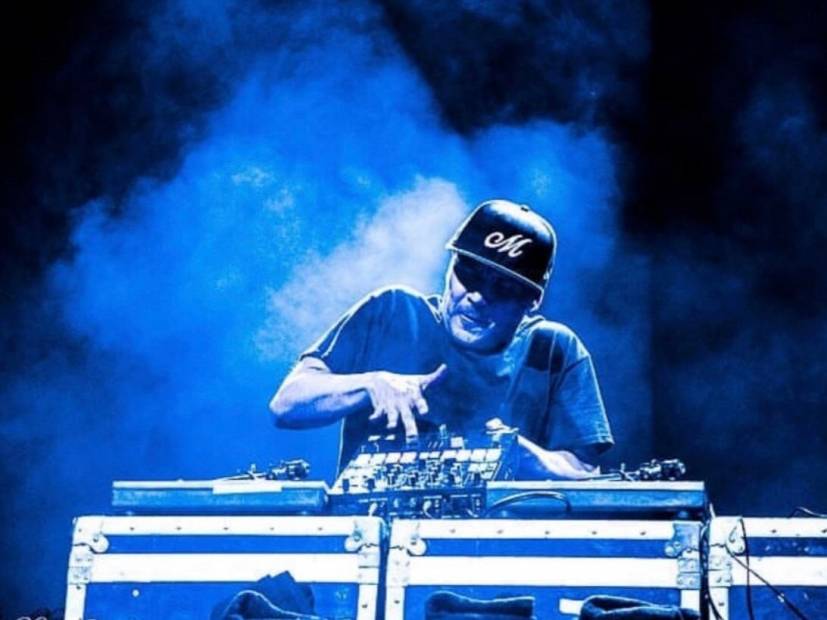 At the same time, Mike had established himself as one of Hip Hop’s preeminent turntablists after winning the DMC World Championships three times and was an integral member of the Invisibl Skratch Piklz alongside DJ Qbert, Shortkut and D-Styles.

Together, Ad-Rock, Mike D, MCA and the Bay Area-bred scratch magician were an unstoppable force. But in 2012, their flourishing career came to an abrupt end when MCA died from cancer at the age of 47.

Last year, the remaining members of the Beasties found themselves in a collaborative environment again when Mike was asked to join the Beastie Boys Book Tour.

“Being back in the creative space was just amazing,” he tells HipHopDX. “I remember we just camped out at my house for a whole week. When the guys presented the idea of me scoring the whole tour, I was like, ‘OK, that sounds great, but you guys gotta come over here to my pad and we can put it together.

“I was in the middle of so much stuff, working on my album and whatnot. We actually camped out in my studio poolside and came up with the whole script. Being together for a whole week was therapeutic for all of us. Because ever since we lost Adam, it was kind of like we were doing our own thing and it went out.”

As a result, Mike, Ad-Rock and Mike D embarked on a multi-city book tour to promote the Beastie Boys Book, which was released last October. Directed by Spike Jonze — the brains behind their “Sabotage” video — the book tour hit New York City, Los Angeles, London and San Francisco.

But the veteran turntablist wasn’t just the musical brawn behind the venture, he also contributed “The Draco Report” on pages 414 and 415 of the massive book, which tells the story of how “DJMMM” and MCA met in a way only Mike could.

“I first encountered humanoid subject #A718 Adam Yauch at a youth gathering in Earth’s subsector NY212-B,” he writes in part. “My mission was to observe and engage in human relational protocol known as Rock Steady Park. The proceedings were referred to as a ‘hip hop jam.'”

Considering the ample amounts of time Mike, Ad-Rock and Mike D have been spending together, one question remains for any devoted Beasties fan: Could new material from the Beastie Boys be on the way? Technically, yes.

But in terms of releasing new music with Mike D and Ad-Rock, that’s more vague.

“I think that would have to be initiated on my end,” he explains. “If I really, really, really wanted that to happen, I think it’d be happening already.

Mike does say that maybe after all of his various endeavors are wrapped up, Mike D and Ad-Rock could pop up on one of his singles.

For now, Mike is focused on the mind-bending musical madness that is Conquest. To coincide with the release, the globetrotting DJ is going on an extensive worldwide tour, which kicked off in New York City on August 3.

The 49-year-old is also anxious to unleash an upcoming biopic about his life. Fans will finally get an intimate look at who Mike Schwartz is — not just Mix Master Mike. While he says the script for the film is done, they’re still looking for the right director to helm the project.

“This is Mike Schwartz going through his journey, the journey and the chapters and the segues of life,” he says. “It’s the obstacles. Obviously, we weren’t brought here with a manual to this whole thing, so it’s just all of the shit that I had to go through to get to where I’m at today.

And that’s just the tip of iceberg. He promises he has the mother of all posse cuts on the way titled “Megaton 10,” which will feature DJ Premier, DJ Jazzy Jeff, DJ Qbert, DJ Craze, A-Trak, DJ Babu, Melo D, Shortkut, D-Styles and, of course, Mix Master Mike on one track.

“It’s something that I keep listening to it over and over again,” he says. “Just think if you got, [John] Coltrane, [Jimi] Hendrix, Miles Davis and Thelonious Monk all on one track. That drops in 2020.”

Conquest follows 2016’s VR experiences The Magma Chamber and subsequent Moon Base Invasion. The album is expected to arrive next month.