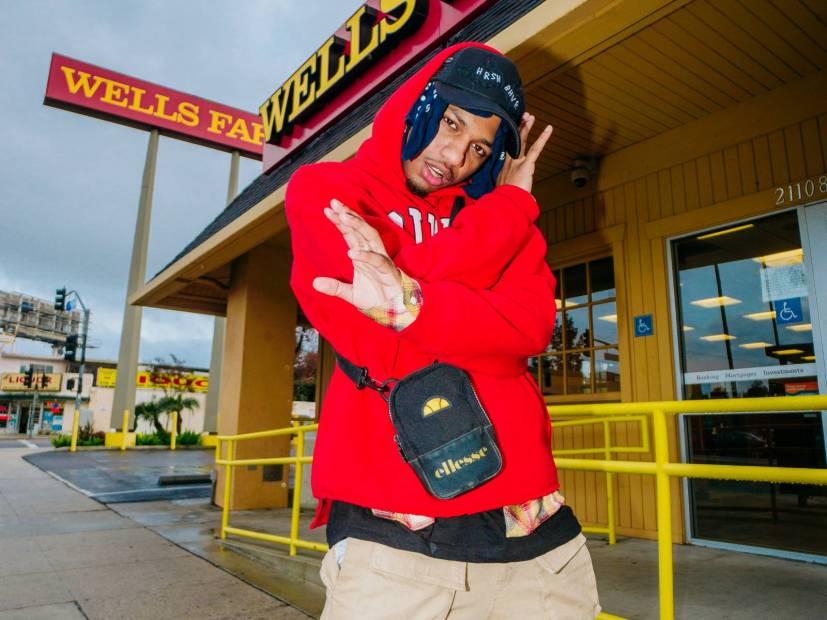 Hollywood, CA – Guapdad 4000 had probably narrated the tale of him scamming Grammy Award-winning artist Drake out of $100,000 a million times by the time I spoke with him, but I asked anyway.

“I usually book him on some homie shit,” the 27-year-old disclosed while chilling on the rooftop of Earthgang and J.I.D’s crib as the sun’s rays gently evanesced behind the hills of Hollywood.

The plan was to have the biggest star in the world make an appearance at San Francisco City Hall after the Aubrey & The Three Migos show. Drake was expecting a small intimate crowd, however, when he showed up it was clear there was a lot more going on.

“On my end, things were spiraling out of hand,” Guap further revealed to HipHopDX. “The mayor of San Francisco was there. It went from the club to city hall to me needing a police escort. People were buying $30,000 tables.”

The price for tickets started at $99 with VIP tickets going for $149 and $20,000 for a private table and bottle service with the expectation that Drizzy would be putting on a full show.

Finnam so hard even the Six God aint safe. RESPECT MY SCAMMIN . I got this nigga to pull up to an event to secure my bag . He peeped the scene and cut 😂 . & still popped up backstage at his show Lmaoo We still good … tag @champagnepapi and tell him he got finnamed

The crazy part is, Guapdad wasn’t even there when Drake arrived. They linked up to the following day after Drizzy’s show.

“He agreed to it, but he didn’t know what it was so he was really mad,” Guap recalled. “He left as soon as he got there.”

In the end, despite reports stating otherwise, Guap confirms that Drake did get paid.

“He was a good sport,” Guapdad asserted.

As the Scam God successfully finessed the 6 God into showing up to an event last year, he definitely has more scams up his sleeve like the follow-up to 2017’s Scamboy Color project, Dior Deposits, which he describes as the biggest scam in the world.

“I got all the top streaming artists in Hip Hop on it for free and they gave me their best verses,” he explained. “Chance the Rapper, Tory Lanez, 6LACK, G-Eazy…They did it for free out of love and fucking with me. We got good energy.”

In spite of “finamming” Drake, the two are actually very cool and began their friendship around the time of Scorpion‘s release. Before they ever made contact, the “No Guidance” artist knew exactly who Guapdad 4000 was and even made a bet with him for the 2019 NBA Finals.

“If you’re a rapper in the game, you knew who I am before I started rolling out music,” he explained. “All the rappers knew who I was because I be kicking it with everybody and I influence a lot of people indirectly with how I dress and talk. I get to say stuff that rappers don’t openly get to admit, so they gravitate towards that. By the time we were talking on Instagram, he was completely aware of who I am and we been homies ever since.”

They became so close, Drake invited Guap and his parents to his New Year’s Eve soireé. That’s the night Guapdad met J. Cole. After sorting out where he and Drake should go for some after-the-club eats, they finally settled in on a restaurant Cole just so happened to be at.

“We walk in, and J. Cole was there,” he recounted. “I wasn’t going to say anything to him but somebody I knew was talking to him so I was like fuck let me go over and go speak. Then he was like, ‘Oh nah you Gaupdad 4000, I know who you are, you hard as fuck. I just listened to some freestyle you put on Instagram hella people were sending to me. Bruh, you’re funny, you can fucking rap.’ I was like thanks man I appreciate it, you’re J Cole. When I was about to leave, he was like, ‘Aye take my number down.’ I took it down and texted him 30 minutes later. He texted back hella fast, like, ‘Got you locked in and it was great to meet you.’ I was like fuck, J. Cole either really bored or like really fuck with me. And then a couple of days later I got the invite through my team.”

He spent four days at the coveted Dreamville camp for the creation of Revenge of the Dreamers III and landed on three tracks: “Don’t Hit Me Right Now,” “Costa Rica” and rambunctious fan-favorite “Wells Fargo.”

“Man, me and that drunk ass nigga downstairs [referring to J.I.D.],” Guap recalled of the making of “Wells Fargo.” “J.I.D., Buddy and Olu. It was the definition of movie magic to me. It happened so fast we couldn’t even process it at the time. We did it all in 15 minutes or less. Buddy already started freestyling a verse and J.I.D. had a cadence for the hook.

“I remember saying Wells Fargo because, you know, scam shit,” he continued. “Then it just kind of spiraled into ‘Wells Fargo.’ I just remember our arms around each other and looking at these niggas like, damn I really fuck with these niggas. It was like a summer camp thing. It’s crazy to think about now because it was on the Billboard Hot 100. It was magic and people feel that magic.”

If the rap community wasn’t taking Guapdad 4000 seriously before, even after Drake’s “Flossin” endorsement, Revenge of the Dreamers III serves as a wake-up call that he’s more than just promoter who scams and pimps. He’s a rap star too and it’s always been in the plan.

Guap’s success hasn’t been without some trials and tribulations, though. After some healing, he opened up about losing his West Oakland childhood home due to gentrification.

“The bank gets wind of this energy and they raise up the mortgage,” he explained. “Everybody in low-income areas are usually on an adjustable-rate mortgage so it’s really whatever the bank wants it to be. My success hadn’t reached the extent to where I could fully take over. It was a really emotional thing for me. I never had to lose a house.”

Just got word someone bought my Lola house . It’s a wrap.. been trying to stay away from it but my feelings really hurt about it . I’m sure some white guy will do white things in it . Damn I just wish I could get rich faster 😔

According to Guap, the cover art for Dior Deposits will likely be a photo of his childhood home.

“I feel like I’ve cried enough about it to where I can talk about it with you and not break down or some shit because it was too heavy,” he continued. “I was avoiding it for a while. On the last day, we threw a big ass party.”

2019 has been bittersweet for Guap and the focus has consciously transformed into elevating his brand towards legendary status.

“I want niggas to look at me like how I look at Childish Gambino, Tyler, The Creator, Pharrell and Kanye West,” he revealed. “I’m just the Oakland one. I’m the Sasquatch, I’m the phoenix, I’m the fucking alien.

Similar to the lyrics contained in the Scamboy Color cut, “Freeband Phoenix.”

“That’s me,” he continued. “The phoenix is reborn from his own ashes. When I was hustling and scamming, you can hit rock bottom hella fast and then you gotta come back on top. It’s been a couple of phoenix moments, like me losing the house, but I got one out here now.”

Presently, Guap has a spot in San Fernando Valley’s wealthy enclave of Woodland Hills so the push for Dior Deposits is in full effect and is expected to hit streaming services this fall.